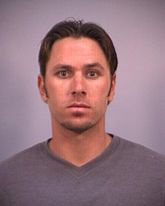 Kyle Sean Chapman (November 12, 1975[1]–) is the founder of the Proud Boys street fighting spin-off group known as the Fraternal Order of the Alt-Knights (FOAK). The spin-off was endorsed by Proud Boys' founder Gavin McInnes.[2] Chapman is also known as Based Stickman for his breaking of a wooden closet rod over an opponent during a melee.[3]

Chapman's federal supervision ended shortly before he appeared at a March 4, 2017 alt-right rally in Berkeley, California (known informally as "The Battle of Berkeley"), where he was first seen to be wielding his eponymous stick.[3] Chapman was charged in August 2017 for actions during the March rally for "suspicion of felony possession of carrying a leaded cane or billy club".[5] In December 2017, Chapman was taken back into custody after he violated the terms of his bail, but was subsequently released again after raising enough money for the new $400,000 bail amount on now-defunct crowdfunding site "Back the Right."[5] He was eventually sentenced to five years of probation.[6]

He simply could not stay out of trouble while on probation, however, as he was once again arrested for assault (this time for battery against a healthcare worker) in January 2022.[7]

During Chapman's 2009 prison sentencing, his own lawyer claimed that Chapman had "severe psychological problems", suffered from auditory and visual hallucinations and "delusions of persecution."[3] During a 2009 prison psychiatric evaluation, Chapman stated that he started abusing alcohol and drugs starting at age 12, including alcohol, LSD, marijuana, and "his substance of choice" huffing Scotchguard™.[3] Chapman has also reported abusing the opioid painkiller Vicodin and occasional use of cocaine following going off his prescribed medications for depression and anxiety and the termination of his mandated psychiatric supervision.[3]