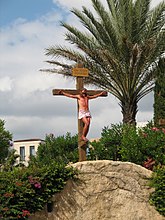 Always look on the bright side of life...

The Holy Land Experience is a series of gift shops linked by Biblical tableaux theme park located in Orlando, Florida,[1] run by the Trinity Broadcasting Network designed to show you (yes you, you miserable sinner) the historical Middle East from a US fundie perspective.

While Da Vinci's Notebook calls something else in Orlando the "promised land",[2] this is the Real Thing. It featured in Bill Maher's movie Religulous.[3]

The "majestic gates of The Holy Land Experience" opened on February 5, 2001.[4] Initially opening on Sundays, the HLE dropped the practice in 2005[5] "to give the staff... time to spend that day in worship". (There's nothing like getting a break from work!) Currently the HLE is closed on Sundays and Mondays.

The HLE was founded by a Jewish-born Baptist minister, Marvin ('Marv') Rosenthal. Marv is also chief executive of Zion's Hope, a ministry devoted "toward reaching the Jewish people for the Messiah".[7] The Jewish Defence League picketed the HLE on its opening day, concerned that the park aimed to convert Jews to Christianity.[8] After experiencing financial difficulties and racking up debts of $8m, the HLE was bought by the Trinity Broadcasting Network in June 2007 for $37m. In order to reduce property taxes by $300,000 it agreed with Orange County that it would provide free admission for one day each year, but the date of free entry is a closely guarded secret "out of concern over a possible 'uncontrollable situation'".[9] However, it managed to cope with the maximum daily limit of 2000 in 2010.[10]

Herman Cain visited the HLE in November 2011 as part of his campaign for nomination as Republican candidate for the 2012 presidential election.[11]

In February of 2020 the Tampa Bay Times reported that as of April 18 of that year the park would be laying off 118 employees and ending all theatrical productions and other entertainment, though the Church of All Nations and the museum would remain open. [12] There is no news as to whether the Trin-I-Tee mini golf course will remain open.