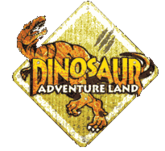 Dinosaur Adventure Land was a creationist amusement park in Pensacola, Florida, constructed in Kent Hovind's backyard in 2001. The park's theme is "Where dinosaurs and the Bible meet!" A fine institute of higher learning, Pensacola Christian College, can be found down the street. 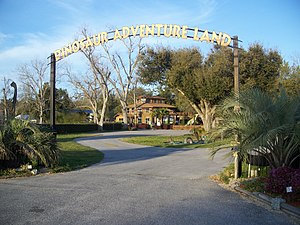 The only thing missing, of course, were the dinosaurs. Paging Dr. Hammond…

Before going to jail under multiple counts of tax fraud and evasion, Kent Hovind first ran afoul of the local authorities by refusing to get permits for his creation themed park Dinosaur Adventure Land, which he built in his back yard.

Hovind was charged on September 13, 2002, for failure to observe county zoning regulations with respect to Dinosaur Adventure Land.[2] The Circuit court ruled the Hovinds in contempt of court, and the park's buildings were locked up.

Eventually Hovind pled nolo contendere (no contest) to various charges and was ordered to pay fines.[3] In June 2006, Hovind estimates he spent $40,000 in legal expenses on this case—all to evade a $50 permit fee.

Hovind's was a prominent example of several movements in extreme evangelical circles that attempt to deny the state's right to exert any authority on holdings of the church or church members. Building permits are a popular focus for groups to fight against.

On account of Kent Hovind doing structured bank withdrawals to avoid reporting, in July of 2009 the US District Court ruled that the IRS may seize Dinosaur Adventure Land to pay for fines and the bank withdrawals associated with his structuring conviction.[4] The IRS set the seizure date for the 15th of September 2009.[5] Hovind's son Eric managed to raise the $380,000 and said that the government has agreed to let him purchase the seized property back.[6] However, the government came back and offered the property for purchase at the "fair market value" of $971,000. Without enough funds raised it is unclear what the current plans are for either the park or the nearly $400,000 raised that will not go towards what it was raised for.

After returning from prison, Hovind opened up a new Dinosaur Adventure Land in Lenox, Alabama[note 1] in 2018 on a donated gravel pit.[7][8] At one point, a kid fell into the pond and drowned there. [9]