From RationalWiki
(Redirected from I'm not racist, but...)
Jump to: navigation, search 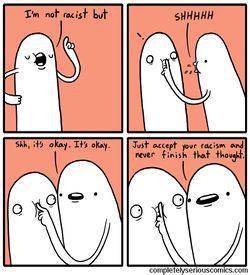 Variations include ending the sentence with "not that there's anything wrong with being gay/African American/whatever" after they have just made an offensive statement about them. Or the old classic, "I'm not anti-(fill in the blank); some of my best friends are (fill in the blank)." As one editor's grandmother is fond of saying: "The Lord knows I cherish black people, but…"

Some say that they judge the conduct, not the person. For example, "I don't hate homosexuals, but I can't approve of their conduct." When people ask them "Doesn't your view of homosexuality encourage prejudice against gays? Isn't this homophobic?" they can say "Not at all. I reject homosexual conduct, not people." This way, they think that they can eat the cake even though they do not really have it: they can discriminate against gays and claim at the same time that they aren't homophobic. It's good to notice that this can be varied to justify racism: "Oh, I have nothing against the black people, but their behaviors, like the fact that they choose to live in this continent. I am not a racist or anything like that" or any other form of discrimination.

It may also be possible that the person intellectually understands that bigotry is bad, but genuinely fails to realize that what they are about to say would indeed qualify as bigotry. For example, it is a known fact that, on average, women have less upper body strength than men. To suggest that it would still be sexist to point this out would be to take an Orwellian approach to information (although any conclusions you might extrapolate from this fact could potentially be quite sexist indeed). Thus, to say "I'm not sexist, but women on average will not be able to bench press as much as men." would be a true and completely non-contradictory statement. So if someone is under the impression that, for example, women are also statistically less intelligent than men on average (they are not), then they would likely think that acknowledging said (non-)fact would also not be sexist.