The Traditional Britain Group may seem at first like a quirky, quintessentially British Conservative organisation where everyone likes to dress up with a fondness for the good old days and formal dress. However, appearances can be misleading: TBG is in fact a far-right nationalist organisation, founded in 2001, opposing immigration and the UK's (former) membership of the European Union.[1]

Gregory Lauder-Frost, a man with particularly distasteful far-right associates through the Western Goals Institute (the predecessor to TBG)[2] is its vice-chairman and treasurer. Its chairman is listed as Merlin Hanbury-Tracy (Lord Sudeley).[3]

Lord Sudeley, who died in September 2022,[4] was a right-wing campaigner and vice-chancellor of the International Monarchist League, former president of the Conservative Monday Club, and Patron of right-wing magazine Right Now!. Iain Duncan Smith, while leader of the Conservative Party tried to distance the Tories from Sudeley, the Monday Club, and Right Now! over their attitude to race.[5] TBG has been described by the anti-fascist group Hope not Hate as the UK arm of a pan-European alt-right network.[6]

The group's stated principles include opposition to egalitarianism; a return to tradition; the centrality of the "heterosexual family"; spiritual values and "the sacred nature of Christianity and our Established Church"; rolling back the welfare state; and opposition to immigration, multiculturalism, political correctness and cultural marxism.[3] Guest speakers have expressed a desire for restrictions on immigration similar to those in Hungary under Viktor Orbán,[7] and the group's Facebook page has called for the compulsory deportation of Doreen Lawrence (mother of murdered teenager Stephen Lawrence) and "millions of others ... to return to their natural homelands".[8] Because black people obviously can't be nominated to the House of Lords on their own merit, Lauder-Frost views her appointment as a form of tokenism, calling her a "spiv 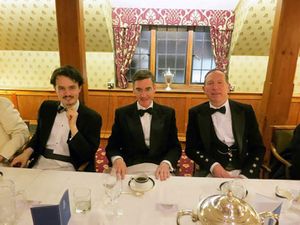 Jacob Rees-Mogg (centre), speaking at the 2013 annual dinner of the Traditional Britain Group, a far-right organisation. To the right is Gregory Lauder-Frost; to the left, a 20-year old history student with an interest in race and intelligence pseudoscience who left the TBG following the Rees-Mogg controversy.[9]

In 2011, Gerard Batten (UKIP leader from April 2018 to June 2019) spoke at the group's annual dinner.[10][11] Batten has been criticised by former UKIP leader Nigel Farage for making the party lurch even further to the right in his support for Tommy Robinson.[12]

However, as Batten was a political nobody then, its main brush with fame was when Conservative MP Jacob Rees-Mogg spoke there in 2013 (despite previously being warned by anti-fascist group Searchlight of TBG's far-right views), bringing a lot of attention to its views on race and leading to criticism of Rees-Mogg, who then turned round and criticised the group.[8][1] In their annual conference of that year, the group was addressed by American white nationalist Richard Spencer and Austrian anti-Islam activist Markus Willinger.[13]

and Liberty GB founder Paul Weston spoke at a TBG conference concerning "the basis of culture".[14] However, for 2017, TBG seems to have upped the right-wing ante by having as speakers for their national conference of that year the even more hard-right Anne Marie Waters (another UKIP candidate, also criticised by Farage, now created her own her own far-right, anti-Islam outfit) as well as Martin Sellner (boyfriend of Brittany Pettibone and Austrian leader of the far-right Generation Identity (GI) movement), as well as friendly ex-BNP faces such as Mark Collett.[15]

In October 2018 it hosted a conference with speakers including representatives of the extremist parties Freedom Party of Austria (FPO) and Alternative für Deutschland (AfD), as well as far-right troll Katie Hopkins.[16][17] James Thompson (former senior lecturer at University College London) pulled out of his speaking slot to the group following "considerable pressure"; Thompson lost his honorary professorship at UCL after Private Eye "revealed he had been organising secretive conferences on racial eugenics – and inviting notorious white supremacists".[2]