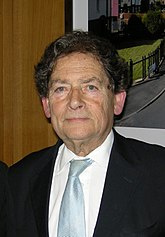 Nigel Lawson (born 11 March 1932), was a British Conservative politician and former member of Margaret Thatcher's cabinet.[1][2] He held many posts including that of Secretary of State for Energy,[3] but his most notable appointment was the Chancellor of the Exchequer.

Lawson has been a political nobody since his glory days as 'the Chancellor' but recently managed to shuffle himself back into political prominence by reinventing himself as a climate change denialist. Though less ardent than the fruitloops and wingnuts of the denial movement (he stops well short of claiming that climate change is a hoax or conspiracy to create a New World Order), Lawson did maintain that there had been no global warming in the last decade, until recent record-breaking temperatures made that position untenable. His book A Cool Look at Global Warming[note 1] maintained that there had been no warming; if there had been warming it had nothing to do with humans; if it did it wasn't a serious risk; and if it was there was nothing that could be done about it anyway. The book is also memorable for mocking the 40,000 victims of the 2003 European heat wave

by contrasting their unspeakable deaths in the hottest European summer since at least 1540 with his own contemporaneous trip to the south of France, ascribing their deaths to a "perfectly acceptable" experience which was, in his own words, "obviously a stretch for some."

Lawson's renewed visibility has allowed him to him chair several important reviews and to launch his own think tank, the Global Warming Policy Foundation (the British version of the Heartland Institute).[4] As the foundation's ideal "policy" on global warming is to do nothing, this must surely count as either the most worthless think tank or the most mendacious. Unsurprisingly, the source of the foundation's funding is kept secret, but by 31 July 2010 it had received £503,302, of which only £8,168 came from membership contributions. The foundation, often criticising scientists' "secrecy,"[5] itself has declined four Freedom of Information requests to disclose its funding.[6]

In addition to his work with the foundation, Lawson is a frequent critic of the cost of combating climate change,[7] which is a bit of an irony since he was instrumental in the privatisation of UK energy utilities, the same utilities that are now levelling price rises (above inflation) on the consumer.[8][9] During the expenses scandal, it was revealed that Lawson managed to claim £16,000 in overnight allowances by registering his farmhouse in Gascony as his main residence.[10]

Hard as it is to believe looking at them both, he is the father of TV cook Nigella Lawson and was made Baron Lawson of Blaby in 1992. He also appeared in the "documentary" The Great Global Warming Swindle.

Lawson was the former chair of the 2016 Vote Leave campaign that supported Brexit. Hypocritically, he decided to apply for residency in France in 2018 before the UK has even completed Brexit negotiations.[11]