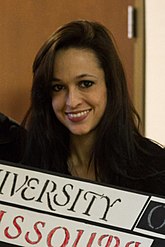 One of the world's many YouTubers.

Jaclyn Glenn is an atheist vlogger. Her YouTube channel has over 800,000 subscribers and 127 million views.[1]

Glenn was raised Roman Catholic, and was still a Christian when she started vlogging on YouTube. In her early videos, she generally expressed liberal views on social matters. She apparently began to question Catholicism's stance on divorce, which led to a questioning of her faith more generally. In 2012, she revealed that she was no longer religious, and now identified as an agnostic. She has since come to call herself an atheist.

Richard Dawkins has shown some pretty strong support for Glenn.[2][3]

As an atheist activist, Glenn is critical of religion. She has criticized Christianity, mostly fundamentalism within the religion, as well as Islam, arguing that it promotes violence.

She is opposed to Atheism+, which she describes as "atheism plus radical feminism".[4] Despite this definition being far from the truth, she seems to support a lot of the same values as Atheism+ at times.

Glenn is an outspoken supporter of gay, lesbian and transgender rights but has espoused views on her YouTube channel which are considered by some to be trans-exclusionary. Specifically she has said that a trans man who presented as a man but had female genitalia was "biologically, a woman."[5]

Glenn teamed up with self-admitted transphobe Arielle Scarcella to attack Riley Dennis and her girlfriend Fiona to the point where Fiona decided to shut down her relatively small channel, because she started receiving an overwhelming amount of abuse from Glenn's large fanbase. Glenn later defended her video, this time going one step further by saying she would not date a man she otherwise found attractive specifically because he was trans.[6] In this video response, she stated that "Whenever you say things that I have a problem with, I'm going to call you out, whether or not you have a huge channel or a small channel". This stance should, properly, have committed her to making video responses to other YouTubers such as Blaire White, with whom she had just admitted to not agreeing on everything less than a minute earlier.

Glenn had featured Scarcella on her channel earlier in her infamous Two Genders video.[7] She also frequently collaborates with the exclusionist and conservative trans commentator Blaire White.[8][9][10][11] Conversely, she made an emotional video on the death by suicide of transgender teenager Leelah Alcorn,[12] decrying the religious influences that caused her to take her life, rebutted Hunter Avallone's infamous "The Truth About Transgenders" video[13] and regularly defends trans people from attacks by conservative and/or transphobic religious people.

Following the massacre committed by Elliot Rodger, she made a video arguing that Rodger's actions were solely based on mental illness, rather than misogyny. She has even gone so far as to claim feminists were "hijacking" the massacre to make it look like it was influenced by misogyny, when, according to Glenn, it wasn't.[15][16] Glenn's view specifically was endorsed by Dawkins.[17][18] Never mind that Rodger himself, widely considered one of the foremost experts on his motives, pretty explicitly debunked this.

Glenn came under fire in 2015 for allegations of plagiarism. The controversy began when she was called on a video she made about Kim Davis, in which she repeated every word of a video by Theoretical Bullshit. She was then caught also reading word for word the comments of her Facebook fans and passing them off as her own.[19] Afterwards, other videos of hers were found to be copied dialogue of other individuals, including Sam Harris.[20] However, she mostly plagiarized — that is, copied verbatim without attribution — comments on her Facebook and dialogue from other YouTube videos. Many other YouTubers condemned her actions, including her buddy TheAmazingAtheist. She has since given a half-assed apology admitting she did some wrong doing, but not really. Interestingly enough she hasn't even been prudent enough to delete the evidence of her plagiarism from her Facebook page which is available to see.[21]