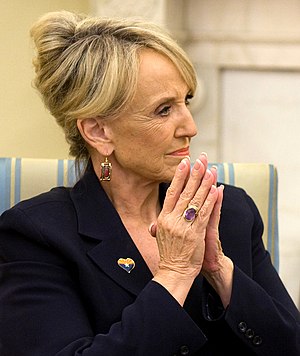 The Fractal wrongness queen herself.

Jan Brewer (b. 1944) was the lunatic Republican governor of Arizona. She "served" as governor of the state from January 21, 2009 to January 5, 2015, and is most renowned for signing into law the infamous SB 1070 bill that would inevitably promote racism.[1] When compared to Nazi officer Heinrich Himmler, she took offense because she said her father died fighting the Nazis. Turns out this was straight-up bullshit as he actually died of lung cancer a decade after the war ended.[2][3]

Governor Brewer was arguably one of the more extreme conservative governors in the country. She believes that the Endangered Species Act is harmful for the environment (but offshore drilling is A-OK!) and that the United Nations Human Rights Council is made up of a bunch of dictators. Her pro-gun voting record has earned her an A+ rating from the National Rifle Association.

In May of 2012, Brewer signed a controversial bill which allows an employer to deny birth control to any woman on religious grounds. This is a state version of the Blunt amendment. If a woman is taking the pill for medical reasons, she must prove this to her employer by providing her medical records on that issue: it's not enough for an MD to simply write a note.

Her stopped clock moment came on April 18, 2011, when she vetoed a Birther bill. A second occurred in June 2013 when she came out in favor of Obamacare. The hat trick came in February 2014 when she vetoed (after tremendous pressure by big business) a bill that would allow businesses to deny service to gays on religious grounds.

She has openly supported Donald Trump.

She could be has stated an interest in being the GOP nominee for Vice President. As quoted by Yahoo News, “I would be willing to serve in any capacity that I could be of help with Donald on,” Brewer said. Ultimately Mike Pence got the job.

This politicians-related article is a stub.
You can help RationalWiki by expanding it.
Retrieved from "https://rationalwiki.org/w/index.php?title=Jan_Brewer&oldid=2453844"
Categories:
Hidden categories: