From RationalWiki
(Redirected from Turks)
Jump to: navigation, search 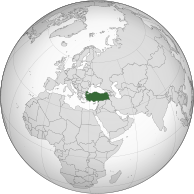 Turkey is either a European country in the Middle East, or a Middle Eastern country in Europe. Turkey is was a modern republic (though the military did get involved from time to time) in a region that is usually home to despotic theocracies, kingdoms, or one-party states. There is a high level of support for its secular constitution. However, it seems that due to the identification of secularism with military coups, stratocracy (a government headed by the armed forces, typically military chiefs) and elitism,[notes 1] Turkey is one of few completely secular countries where fundies actually have a shot at power. Turkey is now a sultanate ruled by Recep Tayyip Erdoğan[notes 2], due to a long and well-planned series of political ploys and power grabs. Its history includes the one-party Kemalist era, conservative Democrat Party's dominance in the '50s, and instability until 2002, when the social conservative and somewhat Islamist AKP took over.

In America, "Deep State" is a polite way of saying Illuminati without looking like a complete loon. In the old days, Deep State was a term originally used to describe the undemocratic role of the military and intelligence community in Turkey. The army has tasked itself with preventing the government from being a tool of Islamists. They've successfully overthrown many Turkish regimes, and have been scapegoated by current President Erdoğan for a whole host of Turkey's ills, in order for him to consolidate power. The latest of which was the faux coup.

Although Internet censorship was not generally considered a concern in Turkey, it became widespread after a new law was passed in May 2008. In one incident, Richard Dawkins' website was blocked after a complaint by Harun Yahya, a pseudoscience promoter who campaigns for the Islamic version of creationism. Harun Yahya claimed Dawkins' site contained "insulting" remarks about his works.[2] Fortunately this law was repealed in 2010, largely because they forgot to also ban vTunnel.com and hence the original law had no effect. (That and, insulting a dishonest tool like Yahya is hardly a crime.) In 2014, social networking site Twitter was blocked following claims of corruption against the prime minister being published there.[3]

As of March 2016, arbitrary government interference with mass media became commonplace, as well as jailing of dissidents.

The cultural clash of modern Turkey can be summed up in the very existence of the show Building Bridges (also called "The Versace Harem"), which consists of, quote "a group of Muslim women with tight shirts, bright lipstick, a feminist mission, and total devotion to a creationist guru.".[4]

Areas in what is now Turkey are almost as central to Christianity as Jerusalem. Several early Christians set up shop in Anatolia, occasionally going underground in the sandstone formations of Cappadocia. Constantinople (now Istanbul) was the capital of the Eastern Roman (Byzantine) Empire and center of the eastern Christian world, up to when the Crusaders sacked it in the Fourth Crusade. Several major cathedrals are located there, such as the Hagia Sophia, which got converted into a mosque and later into a museum. Despite being so important to Christianity, Greek Orthodox was the main denomination there, so the West just kind of ignored it and today the Church is probably in crisis there as its archbishop (Ecumenical Patriarch Bartholomew) only has a small office compound, which is under constant threat from Islamic extremists and an inability to get more leaders for the spot.

Until recently, the nation was considered a viable candidate for membership in the European Union. Such issues as the Cyprus dispute, denial of the Armenian Genocide, denial of existence of Kurds among its citizens, geographic pedantry from some quarters, and various other stood in its way. Also, the issue that only 3% of Turkey is actually IN Europe.

Ten million Turkish lira note which was in circulation between 1999 and 2005. Inflation, HOOO!

Amazingly, the European Union still lists this blatant rightist dictatorship as a candidate for accession,[5] in spite of its internal abuses and links with Islamic terrorism abroad. Unlike e.g. Milošević's Serbia in 1998, Turkey is a NATO member and buys Western arms. This makes a big difference.

Meanwhile, the EU uses Turkey as a room for Middle Eastern refugees who could otherwise flood Europe itself.

Turkey has its own currency, the Turkish lira (Türk lirası; sign: 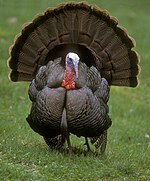 Turkey is also the name of a large bird native to North America that has been domesticated and tastes yummy when stuffed and slowly roasted. For this reason, domesticated turkeys have been bred to be larger and meatier than their wild brethren. The bird is often eaten at Thanksgiving in the United States and Canada and at Christmas in many countries. For those who eschew the consumption of meat, Tofurkey® is a viable option.

The bird's name comes from it being initially confused with a kind of Indian wildfowl which was introduced to Europe through the Ottoman Empire. In Turkey (the country), turkey (the bird) is called hindi, which refers to Hindistan, the Turkish name for India.

Benjamin Franklin is widely (but incorrectly) believed to have proposed that the wild turkey be the national bird of the United States, supposedly mentioning it sarcastically while he was voicing his disapproval of the bald eagle. While he did describe the eagle as having "bad moral character," he said nothing of any potential alternative for the national bird. This was also far from a public opinion at the time, as this whole story is derived from a letter to his daughter. He does mention turkeys and bald eagles later in the letter, but the matter is unrelated.[7]