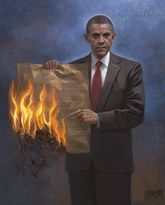 This should give you a good idea of what this guy's work is like.

Jon McNaughton is an artist living in Utah. Having received a BFA from Brigham Young University, he has been painting for 25 years. [2] Since 2009, he has churned out absurd paintings depicting the Founding Fathers as devout Christians, several paintings highly critical of Barack Obama,[3] and several paintings about his newest theme, glorifying President Trump.[4]

Through his website, he sells original paintings, giclée prints (frame optional), and t-shirts.[5]

The real tragedy here is that McNaughton is actually a fairly talented artist. It's just that he also happens to be a crazy person.

Mr. McNaughton's website helpfully explains every last scrap of symbolism in his artwork, leaving nothing to chance, or interpretation. His most famous is perhaps One Nation Under God, depicting Jesus surrounded by a range of patriotic figures and liberal bogeymen, along with some figures representing real Americans.[7] This spawned its own parody, entitled One Nation Under Cthulu, which does exactly as it says on the tin[8] and a rewording of McNaughton's "interpretation", which takes a far sharper tone against the conservative sentiment of the original.[6]

Mr. McNaughton's "Patriotic" art is of a "libertarian" bent. His paintings, The Forgotten Man and The Empowered Man, associate Barack Obama with a number of American presidents McNaughton believes hurt the US through out-of-control spending and stifling regulation. Opposing this group of scoundrels are the heroes McNaughton imagines to be true patriot Christians. Oddly, this latter group includes Thomas Jefferson, who was so devout, he removed the miracles from the gospels.[9]

After hyping it up as "the one painting that says it all" on his Facebook page, and dropping hints and small samples of it, he eventually released Obamanation, which was over-the-top even by McNaughton's own standards, so full of unrelated objects and persons as to be surreal.[10] Given his bent p, it’s hardly a surprise that McNaughton is a Trump supporter, who decided to celebrate Trump’s election by updating The Forgotten Man by creating paintings, You Are Not Forgotten,[11] a painting so over the top that even McNaughton himself wrote in his description: “When I decided to paint this picture, I wondered if this was taking it too far.“[11] Introspection? Not really, as McNaughton immediately went on to: “But, sometimes you have to speak forcefully, like the brushstrokes of my painting.”[11] And he further gleefully cheered his vision of Trump as a strongman POTUS when explaining the ham handed imagery of Trump stomping on a snake: “I want a president that will crush the enemies of liberty, justice, and American prosperity. They may have the power to bruise his heel, but he will have the power to crush their head!”[11]

The most blatantly partisan painting is One Nation Under Socialism, a depiction of President Obama burning the Constitution.[12]

Also noteworthy (in hindsight) is the imagery of McNaughton’s is Obama’s Foreign Policy[13] which features a golf playing POTUS against a backdrop of “fire & fury” — hmmm..., now who does that remind you of...?

Aside from glorified political cartoons, Mr. McNaughton produces pleasant landscapes and "uplifting" religious art. It is possible he uses his more controversial paintings for publicity.

After inviting Mr. McNaughton onto his show to discuss One Nation Under Socialism, Sean Hannity decided to buy the original painting for six figures.[14]

McNaughton's One Nation Under God was removed from the bookstore at his alma mater, Brigham Young University. McNaughton assumed something was wrong with the people he made uncomfortable, rather than admit his artwork was seriously over the top.[15]

Jon McNaughton maintains a blog, where he proudly talks about his art. His paintings are about as subtle as a sledgehammer to the knee, but McNaughton feels the need to explain his politics anyway.

Hail to the real president![edit]