From RationalWiki
(Redirected from Antifa)
Jump to: navigation, search

Antifascist Action (Antifa, AFA), a global collective of left-wing activist groups, has the primary aim of "smashing fascism"[2] in all its forms. The "fascism" the collective primarily opposes includes various forms of oppression (such as sexism, racism and homophobia), government corruption, war and (in recent times) Islamophobia.

The name 'Antifascist Action' (Antifaschistische Aktion in German) first appeared in Germany in 1932, and was a moniker used by the German Communist Party. The purpose of AFA was to present a militant alternative to the brutality of the Nazi Party SA goon-squads against communists and leftists. The German AFA was short-lived, being disbanded by the Nazis in 1933.

In the United States, there have been several precedents to AFA, going back to the Americans in the Abraham Lincoln Brigade

who fought Franco in the Spanish Civil War. Mother Jones has a rather incomplete chronology of "Nazi Punching in America".[3] The roots of modern antifa probably started in Britain in the mid-1970s with Rock Against Racism

(later known as Unite Against Fascism

In 1985, an AFA collective began in Britain which comprised numerous anarchist, Trotskyist and other left-wing groups. AFA was active in brawls with Neo-Nazi organisations such as the National Front and had numerous violent confrontations, such as an attack on a Neo-Nazi in 1990 which resulted in lengthy prison sentences for several anti-fascist activists.[4]

AFA has continued to maintain a presence in Germany and since the 1990s, collectives have developed in other countries, including Sweden,[5][6] Denmark,[7] and Australia.[8] The Antifa movement also exists in Greece where they sometimes clash with police and nationalists.[9][10][11]

Australia's AFA collectives gained strong media exposure in 2015-16 following several rallies conducted in cities across the country by AFA activists, in response to the growth of the far-right white nationalist Reclaim Australia and United Patriots Front movements. On occasions, these rallies, such as some in Bendigo, Antifa activists arrived to confront nationalists causing violent confrontations and numerous arrests. Antifa or Antifa supporters celebrated their confrontations with nationalists, posting some online.[12] Antifa's Sydney collective, Anti Fascist Action Sydney, got into additional violent clashes with nationalists at the now defunct far right Party For Freedom's 10th anniversary commemorations of the 2005 Cronulla race riots.[13] In 2018, Antifa activists in Sydney established a community action group in response the newly established white nationalist Lads Society, the successor organisation of the United Patriots Front. 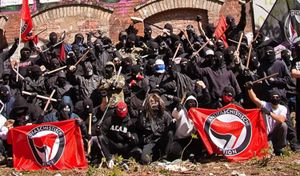 Even ISIS terrorists are afraid of these guys[14]

AFA protesters have a tendency to form a "black bloc", a tactic which involves masked participants dressing in black, largely for protection of identity.[15][16] Protesters usually chant and carry banners advocating for the overcoming of the racist far-right.

Despite not being an organisation, with no official leadership or hierarchical structure in place, under President Donald "Some Neo-Nazis Are Very Fine People" Trump Antifa was classified as a "domestic terrorist" movement by the New Jersey Office of Homeland Security and Preparedness,[17] as well as internally classified as "domestic terrorist violence" by DHS and the FBI.[18]

Criticism of the AFA movement has come mainly from the right wing.[19][20][21][22] Although criticism of modern European Antifascist movements is often based on the violent action they take to advance their position including carrying illegal weapons to combat opponents and breaking into houses of suspected Neo-Nazis,[23] shootings of Golden Dawn members,[24] as well as chasing protestors,[25][26] violent disturbances with nationalists and police,[27][28][29][30][31][32] plus "patrols" against,[33] causing serious injury to,[34] and generally aggressively opposing nationalists.[35][36]

The claim is that when Antifa initiates violence, it is counter-productive because it makes the fascists and racists look like victims. Some Antifa Facebook pages advocate and depict violence, destruction and theft of property against fascists,[37][38][39] while others publicly identify fascists from demonstrations, many of whom attempt to conceal their identity.[40] The Swedish Antifascist organization Revolutionary Front accepts violence in its declaration of principles, stating it recognizes all struggle methods and sees peaceful resistance and revolutionary violence as equal.[41]

Elements of Antifa have at times initiated violence, known as squadism

in the UK,[42] and the decentralized nature of Antifa means that it's difficult to interpret who is Antifa and who has just showed up to start fighting. The groups that Antifa has protested against, however have a long and brutal history (e.g., Nazi Germany and the KKK) associated with their ideologies that continues to this day (e.g., Aryan Circle, Operation Red Dog, Anders Behring Breivik and Varg Vikernes). Consequently, it is unsurprising that most Antifa-aligned groups argue that violence is necessary to combat the influence of fascism and believe that purely peaceful methods simply do not work against fascist groups.

The anti-Deutsch, pro-Israel wing of Antifa co-opting a slogan by the German anti-nuclear wing in protest of Iran's program to develop nuclear capabilities

Antifascist groups usually agree on very few things and there is no such thing as "national headquarters", and even local groups are often best understood as a coalition of disparate groups allied for a common goal or even a single demonstration that don't see eye to eye on other issues. Groups that are subsumed under the "Antifa" label can be as diverse as unreformed Stalinist tankies, green-leftist ecological activists in the vein of Greenpeace or hedonistic leftists who consider the former two buzzkills. While conflicts are usually ignored during common demonstrations against fascism or "fascism", they sometimes break out into the open even then. Some specific Antifa groups may only be anarchist or communist, or can include a mixture of individuals with different persuasions across the left. Problems include tactical considerations such as which form(s) of violence — if any — should be considered, as well as ideological differences and the uneasiness of some libertarian leftists to march next to someone holding a hammer and sickle banner. As per the usual, the stance on Israel is also a hot button issue, especially if someone brings an Israeli flag or wears a keffiyeh.

A common conspiracy theory in parts of the right is that "the" Antifa is financed or works in the employ of "them": the government, globalists, elites, Soros, or — even more tellingly — "da Jooz". Despite the patent ridiculousness of those claims, various non-right wing people frequently allude to this and "leak" ridiculously fake "evidence" for the government financing "the" Antifa and "ordering" violence or property damage.

Liberal commentator Robert Reich—normally a strident critic of conspiracy theories—has promoted the claim that Antifa are financed by the far right. Urging readers to "Connect these dots," he laid out alleged parallel goals of Antifa at UC Berkeley and Breitbart news.[43] Some on the left, particularly in Berkeley, have criticized him for this.[44][45]

Most interestingly, when people started to realize there was no way to back their ridiculous conspiracy theories, the far right started making their own "Antifas" on the internet[46] and raiding antifascist rallies. The most notable example is a group of right wingers who unfurled a banner that promoted pedophilia (they must have an interesting relationship with pizzagate pushers) right in front of a cameraman, who immediately forwarded the picture to Mike Cernovich, who they were protesting against. Today, that image is a gospel truth of the right.[47][48][49]