From RationalWiki
(Redirected from Norwegian)
Jump to navigation Jump to search 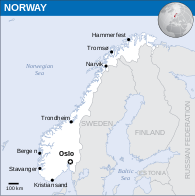 Norway (Norwegian bokmål: Norge, Norwegian nynorsk: Noreg), officially the Kingdom of Norway (Norwegian: Kongeriket Norge), is a country in Scandinavia that borders Sweden, Finland, and Russia. They are good at fishing, handball, cross-country skiing/biathlon, social democracy, and having a massive oil reserve without becoming a failed state like Nigeria, Venezuela, or Saudi Arabia. Most people live in the southern part of the country, particularly around Oslo. The southernmost area, known as the South Country (Sørlandet), is considered Norway's Bible Belt.

For much of its history (after The Black Death), Norway was subject to either the Danish or the Swedish king, and many wars between those two countries ultimately were about who got Norway.

After World War II, Norway became a social democracy, meaning that the people had universal health care and complained because they had to pay taxes. Norway's democratic traditions go back to 1884, and it has only since been under authoritarian rule once, from 1940 to 1945, when it was occupied by Nazi Germany under puppet leader Vidkun Quisling, whose name is now another synonym for a turncoat. Norway has been a member of NATO since its founding in 1949. As of February 2021, the Norwegian Jens Stoltenberg is General Secretary of NATO.

Norway's government negotiated to join the European Union, but a 1972 referendum

(52.2% to 47.8%); on both occasions, rural voters skewed more strongly against and voters in the capital city, Oslo, skewed more in favor (this is something it probably has in common with England). However, almost all Norwegian politicians have understood that Norway benefits greatly from cooperation with the rest of Western Europe, so Norway has become a member of the European Economic Area, which makes Norway a part of the EU for most practical purposes while in principle staying outside. This allows participation in the customs union, Europol, and so on and makes Norway part of the Schengen Area, giving it passport-free travel to most of the EU (except for, of course, the United Kingdom and the Republic of Ireland). This, in turn, means that many of the laws enacted by the EU have been adopted by Norway as well. Norway thus, to some degree, suffers from self-inflicted legislation without representation, which will also apply to the UK following Brexit. So why does Norway not simply join the EU and be done with it? Norwegian voters don't have all the insights their politicians have and are very concerned about natural resources like oil, hydroelectric power, and fishing. Also, the farmers had a strong voice, so the EU referendums were decided much by fear and uncertainty about what could be the consequences of membership. Given Norway's traditional reliance on fisheries, there is a point to not being part of the EU. A similar thing can be said of Iceland, of course.

Like the rest of her Scandinavian neighbors, Norway has adapted the social democratic Nordic Model.[1] However, unlike the rest, Norway has a far greater governmental involvement in the economy, with the government having large stakes in the leading oil company Equinor and the largest telecommunications company Telenor, originating from former national monopoly companies.[2] The government also is involved in other fields to the point it can be called state capitalist.[3]

The Norwegian government offers a free and excellent education at all stages. In addition, there are some private schools. The state offers student loans at the college/university level to cover costs of living so that all talented students have the possibility of taking a higher education independently of their parents.

In recent decades, oil has made the Norwegian state wealthy. Most of the money has been stuffed away in a state-owned trillion-dollar pension fund for future generations, investing in companies and real estate abroad to avoid domestic inflation. Some of the yearly dividends are used to lubricate the economy, strengthening the extensive social programs in healthcare, education, childcare, and welfare.

Norway has one of the world's highest homeownership rates[4] and increasing union membership.[5]

See the main article on this topic: Sami

As with just about anywhere with an ethnolinguistic minority that lacks access to the levers of power, Norway has an illustrious history of overt discrimination against the Sami people. Today's situation is far from ideal but much better than it once was.

The leading political parties of Norway, sorted by the number of votes in the 2017 Parliamentary election, are:

Norwegian politicians are mostly sincere compared to politicians in other countries. Two of the "worst" scandals involving politicians both happened in 2008: One Norwegian politician rented out an apartment where the windows were too small, and the height under the ceiling was too low according to building regulations; she had to resign. Another female politician had sex with a 17-year-old man in a grain field; both were drunk and very consensual; she stayed in politics and has heard one or two comments about the incident.

Norway has claimed the #1 spot on the Human Development Index for over a decade.

Alcohol stronger than beer is only sold in a limited number of government-owned shops. All alcohol carries high taxes, and so does tobacco. Therefore tax-free shops at airports are popular, together with shopping trips to Sweden for the half of the population living near the border.

Norway has two co-existing standards for writing its national language, Norwegian. One, Bokmål ("book language"), is based on Danish, from the dark time when Norway was part of Denmark, and most books were printed there. Luckily, the Norwegian pronunciation of the words is much clearer than the Danish. The other, Nynorsk ("new Norwegian"), was an attempt at recovering a Norwegian way of writing based on a selection of dialects. There is no "official" standard for spoken Norwegian. Unlike in many other countries, regional dialects are celebrated rather than despised, so it is considered socially acceptable to use them in public contexts such as television or in parliament.[6] Indeed, Norway's Education Act even states that "the teacher 'should pay due attention to the vernacular used by pupils, and that he or she should not attempt to make them abandon their home dialect.'"[7] Norwegian dialects are quite varied, e.g., the Norwegian word for "I" can be spelled "jeg" or "eg", and can be pronounced "yæi" (West side Oslo), "yæ" (East end Oslo), "ye" (Eastern inland), "eg" (Bergen), "yei" (part of Trondheim), "i" (Molde), "æ" (Middle and Northern regions), "e" and "æg". In addition, the Sami people have their own very different language with their dialects, and they obviously must have one or more words for "I", too.

Norway is often criticized for hunting whales and seals and for the hypocrisy of allowing the harpooning and shooting of marine mammals while banning Schechita and Dhabihah because both are cruel to animals.

Norway has finished last in the Eurovision Song Contest more than any other country. Norway has also won three times, with two songs that became international hits to some degree ("La det swinge" with Bobbysocks and "Fairytale" with Alexander Rybak) and one that did not ("Nocturne" with Secret Garden).

The Nobel Peace Prize is awarded in Oslo.

Norway is the only country that borders Russia without having been attacked or occupied by Russia or the Russian-dominated Soviet "Union". Actually, a part of Northern Norway can be said to have been liberated by Soviet troops during a major disagreement in the 1940s.

There is a Hell Station

in Norway. One part of the building has a sign saying "Gods Expedition".

Norwegians taught the Japanese how to make sushi from salmon as a part of an initiative to export farmed fish. Norwegian salmon is rich in vitamin D and is delicious in fried, barbequed, smoked, sushi, and cured versions. The fermented version is for connoisseurs only.

The length of the Norwegian coastline is... meaningless. Should one measure roughly along the outer parts? Include more details, making the coast "longer"? Also, measure along the fjords? Also, measure around the islands? Also, measure the islets? Also, measure the skerries? Pick a number between 2,000 and 100,000 kilometers. But at least one can say that the south coast is a delightful place to stay in the summer when many Norwegians go there for vacation. The coast along the Western and Northern parts is popular among foreign tourists who like to take photos of impressive mountains and fjords.

Several of the billionaires in Norway started from nothing.

Norway is a leading country in using electric cars.

Most of the electricity in Norway is hydroelectric, with some additional wind power in recent years.

The cheese slicer was invented in Norway, allowing Norwegians to make thin, cheap cheese slices. The main types of cheese in Norway are gulost ("yellow cheese"), which is also called hvitost ("white cheese") and is a copy of the Dutch Gouda cheese, and brunost ("brown cheese") which is not a cheese at all but instead is a somewhat caramel-like substance that is made from whey.

Many Norwegians believe that the paper clip was invented in Norway.

The list of inventions NOT made in Norway is longer and will not be provided here.

Norwegian Vikings traveled in their Viking ships (what else?) to North America during the 10th century. They also had some encounters with people in England, France, and what is now the Netherlands; this was sometimes peaceful trade, at other times a less peaceful, one-way exchange of goods. Despite common depictions today, blonde hair was relatively rare (brown and red were far more common, and Thor was just about always depicted with red hair), beards were common but not universal, and the facial features of men and women were significantly less distinct from each other than they are today. The average Viking man stood all of... about 5'6". They also invented Iceland, Greenland, and the Faroe Islands. Norwegians are mostly proud of their Viking forefathers and foremothers (equal rights for women have come far in Norway). They are also a bit embarrassed by their varying social skills and manners.

Norwegians came first to the North and South poles for unclear reasons. In Norwegian, it is possible to make jokes about the "East Pole" and "West Pole", but these make little sense in English and Polish.

The polar circle goes through Norway. North of this circle is at least one day in the summer with midnight sun and one day in the winter without any part of the sun coming over the horizon. The polar circle is sometimes called the "moral circle", hinting at what some Norwegians do when there is not so much else to do during the winter with very long nights north of the circle.

The Norwegian city Tromsø is the third most populous city inside the arctic circle, and the largest outside of Russia, with a population of over 60,000. Around the solstices, it receives a large number tourists who want to brainfuck themselves when the sun hasn't set at 10 P.M. or want to eat lunch during the night evening twilight.