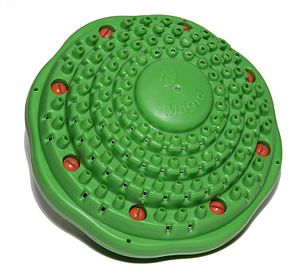 A laundry ball is a ball-shaped object said to clean clothes by mechanical action when used in a washing machine, obviating the need for detergent (note that these are different from the anti-static laundry balls that go in your clothes dryer). Tests have shown they don't work any better than plain water. They are often sold by multilevel marketing operations (and now Kickstarter too!).

There are two motives for this over conventional and orthodox cleaning methods: 1) you protect the environment from all those nasty surfactant chemicals and 2) you save money by not having to buy all those nasty surfactant chemicals. These are indeed real benefits of laundry balls — well, barring any nasty chemicals used in their manufacture, marketing, packaging and transportation — but they most certainly don't work. So it's up to the individual whether they want to use them instead of actual cleaning products.

One brand, the Nanosmart Laundry Ball, won a 2015 Shonky Award from Choice Magazine. "We put them up against plain old water in a test to remove a variety of stains in our washing machine lab, and Nanosmart lost! That's right, using nothing is better than using Nanosmart laundry ball".[1]

While sticking a ball into a washing machine to "agitate" the clothing may work — indeed, increased agitation is the reason that the (now mostly defunct) Dyson washing machine had better performance — "Laundry Balls" have far more woo centered explanations for how they work. Some washing ball products contain "washing pearls". These are small ceramic balls which supposedly "interact" with the washing water or release substances into the water — possibly this is an example of a homeopathic detergent.[2] Actual details of the science behind these laundry balls are few and far between, and as with most woo, when methods are kept secret, alarm bells usually start sounding in skeptical heads. Usually both types of balls are marketed as "environmentally friendly" alternatives to ordinary washing powders or liquids. They are claimed to be able to wash several hundred, up to 1000-1500 loads of wash until they should be discarded.

One of the claims that is commonly made by makers of laundry balls is that they emit infrared waves which supposedly affect the washing by cutting off the hydrogen and binding factors of water molecules. The claim of emitting infrared is not false, as such, since all materials emit "far infrared waves" — in other words, blackbody radiation. It is also true that heating reduces the surface tension of water. Importantly, however, the effect of the radiation emitted by the pearls is negligible compared to the radiation emitted by the water which is being heated. There are no independent tests showing that the pearls could generate stronger infrared waves by interacting with water than what they otherwise should. This is basically a case of taking very "scientific" sounding words that confuse the audience — the same trick is done with foot pads that contain "hydrolyzed cellulose" as an ingredient, rather than "sugar".

The claim of alkalization is dubious. While it is true that the alkaline agents in normal washing powders catalyze the tensides, there are no studies suggesting that the washing pearls would affect the pH of the water, especially for a duration of several thousand washes. The pH of water is not just some magical property: it is caused by ions dissolving in water; to affect the pH significantly, these "pearls" would have to dissolve quite a proportion of their material into the water, and if they could dissolve to that degree, you'd be lucky to get one wash, never mind a thousand.

Many products also claim that the pearls contain "anti-chlorine" agents which are supposed to neutralize chlorine which has been added to the tap water — again, what these "agents" are is never really revealed, and you can't just magically remove chlorine from water, the ions would have to react and go somewhere.[4] Chloride and bleach related substances are actually common in washing powders and chlorine is used in the disinfection of tap water. The claims state that by removing chlorine from the washing water the surface tension is (again) reduced and harmful chlorine can't interact with the clothes, even though the amounts in tap water are very small both in Europe (0.3-1.0 mg/L) and North America (4 mg/L)[5].

Some products claim to have magnetic elements which "minimizes the size of the water molecule which helps with scale and rust removal of the washing machine and pipes". The amount of bullshit in that phrase cannot be emphasized enough: the notion of changing the size of a molecule flies in the face of everything we know about chemistry and particle physics, just as much as the idea of turning lead into gold would. It would be like asking a child to make a given Lego configuration smaller: the only way to do that is to change it to a different configuration, but at that point the molecule is by-definition no longer water.

Both claims are false from a proven scientific viewpoint; while magnets do interact with rust (the iron still has magnetic properties even when oxidised), and limescale may contain iron-containing compounds, magnets will not keep rust or limescale out of your laundry.

This claim is basically another instance of structure-altered water.

Some laundry balls claim to release negative ions, which cause the dirt to weaken in its adherence to the fabric. It is possible that OH- (hydroxide ions) could be created, but not in a large quantity. Again, like with many of the above examples, such ions (which would affect pH as described above) need to come from somewhere as if these balls really do last for hundreds of washes, they won't be leaking out many of these ions. It would be possible if the balls were solid supported base catalysts that produced OH- by abstracting H+ from water molecules, but this would require the balls to be "recharged" after every use by flushing them with a base like potassium hydroxide (KOH), and this isn't the case. Besides, this method would mean you'd be washing your clothes in a base-bath (which basically means the water has negative acidity, but such a concoction would be just as corrosive as an actual acid bath), and you want clean clothes, not rags when you're finished, right?

Laundry balls were once sold by a Scientologist-owned company called Trade-Net. However, due to fraudulent advertising the company was forced to pay large fines to various US states, and it promptly collapsed.

In January 2015, a Kickstarter campaign started to fund a brand new laundry ball kind of thingy. It was successfully funded within a month or so, achieving $268,368 of its $100,000 goal.[6] They claim this is not the same as the laundry balls from the 1990s — the purported method of operation are little "Bio Ceramic" balls, which raise pH levels of the water and create hydrogen peroxide (H2O2), and should give you a clean wash. This is claimed to be "proven in multiple clinical trials showing that it is effective and that the quality of the bio ceramics work without question". So far, they have published one such study by Hong Kong Polytechnic University.[7] This study was commissioned (and paid for) by the manufacturer of the product.

At this point it's not entirely clear if this is woo or a genuine working product. We at RationalWiki are sceptical.

Their page also has a big "no-chemicals"-sign at the top. But then goes on and on about cleaning clothes with hydrogen peroxide. Apparently the scientific community is in error calling H2O2 a chemical compound.

BUT WAIT, THERE'S MORE! It also comes with a smartphone app with a handful of functions. Incidentally, as the Crystal Wash 2.0 is planned to be equipped with a pH meter, which would "show the user the real-time pH level of their wash" via the aforementioned smartphone app, it may prove interesting to see how this would work if it is indeed merely woo.

For the year following its Kickstarter, CrystalWash had been markedly silent about any progress with the 2.0 system outside of its app and the addition of a "CrystalWash Pledge" site where crowdfunding could continue and more preorders could be taken. Since March, its only appearances in the press were a July 2015 article in Eco Friend that simply repeats the information in the Kickstarter campaign, August 2015 article in Green Diary that does the same (It should be noted that both Eco Friend and Green Diary are run by the same person, but that is probably just a coincidence. Probably), and a spot on Gizmodo's "The 9 Most Disgraceful Crowdfunding Failures of 2015".[8]

The company eventually broke its public silence in December 13, announcing the shipping-out of a product just in time for Christmas. Things… were not how they seemed, however. As the comments page on their Kickstarter records in detail,[9] the first backers to receive their shiny new app-enabled pH-measuring Bluetooth-capable laundry ball on December 21st found on their doorstep… a plain laundry ball. By an entirely different company located in Korea. And a letter promising connectivity in Crystal Wash 3.0, which read (in part):

Naturally, the backers were not very pleased with this turn of events.

These are a rather new device for washers, cost about $300, and hook up to the cold water line that goes to the washer. Groups like Consumer Reports have concluded they are no more effective than just washing without detergent and when used with detergent there was no difference.[10][11]