A bar of stainless steel "soap".

Chunks of polished stainless steel have been sold for this purpose; a German firm holds a 2004 patent for its version.[1]

That it doesn't actually work at all is, of course, no barrier to its adoption.

The underlying idea is that the iron or chromium in the stainless steel soap binds sulfur compounds that cause the strong odors of garlic, onions, and other food items. This chemical binding does occur with many catalysts in much more forcing conditions, but there's no proof that it happens in kitchen sink conditions.

It seems likelier that any effects from the stainless steel soap are actually due to the actions of running water and friction, and that a chunk of rubber, plastic, or something similarly solid would yield comparable results.

Currently, the product does not seem to have been tested with any rigor, but an anecdotal report from a chemistry professor is negative, as are most reports from professional news outlets.

Traditional soap has the detergent

quality that arises from its combination of organic acids with inorganic ions, resulting in a product that allows normally insoluble oil and grease to emulsify more easily with water. Stainless steel soap lacks these detergent properties. 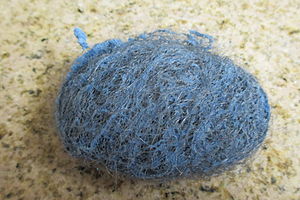 The old-fashioned kind was not gentle on skin either.