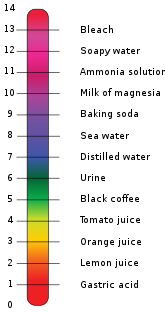 The pH scale on the left, with examples on the right. This scale is not woo, even though the natural opposites "Distilled water" and "Urine" are considered same-shit-different-name on it. Thanks, Science. Great job!

At RationalWiki, pH woo is the catch-all term for all forms of woo that hold that the cause for (some) diseases are changes in "the body's pH balance" — the body (or the blood) being "too acidic" or "too alkaline". It already sounds like harking back to the days of the four humors, only with two.

In chemistry, pH is a measure of the acidity or alkalinity of a given substance (solution). As a most basic explanation, it's an inverse log scale of the concentration of positively charged hydrogen ions, so neutral substances, based on the ionization of pure water at room temperature, are pH 7, while acidic substances have a lower pH, and basic ones a higher pH. There are numerous caveats to what "concentration of hydrogen ions" actually means in practice, however, so refer to Wikipedia or a chemistry textbook for all the gory details.[2]

The problem with "adjusting bodily pH"[edit]

There is not one pH within the body; the stomach, for instance, can have a pH level as low as 1 due to the production of hydrochloric acid. This acid is neutralized again in the small intestine by bicarbonate which is secreted by the pancreas, resulting in a pH level of approximately 7. Further down the intestinal tract, the pH drops slightly again, among other things due to bacterial activity. In women, a relatively low pH of around 4 is maintained within the vagina as a result of bacterial lactic acid. In contrast, the pH in the blood is regulated very tightly within a range between 7.35 and 7.45; lower as well as higher pH values (acidosis and alkalosis, respectively) quickly lead to serious health problems. The pH value within individual cells can again differ considerably from blood pH. The pH of individual organelles (e.g. endosomes) changes over their life cycle within the cell. Most of these pH values are tightly regulated by the body itself, and cannot easily be altered by an outside intervention such as diet.

Some forms of pH woo involve ingesting a few daily teaspoons of weak acidic or alkaline products such as vinegar or baking soda, and/or purportedly acidic or alkaline foodstuffs (e.g. citrus fruits). This is utterly futile for several reasons. The stomach alone produces up to 3 liters of hydrochloric acid solution per day, with matching amounts of bicarbonate produced by the pancreas. The amounts of vinegar or baking soda ingested are negligible in comparison, and will not change the pH level to any significant degree, not even in the intestinal tract. Also, there are lots of buffer mechanisms active, especially in the blood, so even if one consumes enough baking soda to increase the pH value in the intestinal tract, this will still not change the pH level in the blood or other body parts; only the urine may get more alkaline or acidic, depending on what we eat and drink.

Far more dangerous pH woo involves introducing acidic or alkaline substances directly into the bloodstream through an IV. Cancer quack Tullio Simoncini has become notorious for treating patients this way, at least in one case with lethal results.[3] Unfortunately, there are many more quacks out there who believe that baking soda or hydrochloric acid drips are a good idea. Note that even in these cases, massive doses of alkaline or acid substances would be needed to overcome the blood's buffering mechanisms and drag the pH level outside the 7.35 - 7.45 range, and the amounts administered by alternative practitioners usually have no effect whatsoever — fortunately, one might add.

Reasons for (not) adjusting bodily pH[edit]

There must be good reasons why the body insists on maintaining all those different pH levels, quite often tightly controlled indeed, if changing them is so difficult. The easy explanation is that those different pH levels and buffer mechanisms have evolved naturally, meaning that they probably represent the optimal levels for the organs and systems in question. And indeed, the highly acidic stomach interior serves to kill off pathogens and helps digest our food, among other things. Increasing the stomach's pH (e.g. by ingesting large doses of baking soda or using antacids) interferes with these processes. The main medical reason for lowering the stomach's acidity is to treat the effects of esophageal reflux, where gastric acid flows back into the esophagus, causing pain and irritation ('heartburn'). And even in this case, chronic use of antacid is not recommended.

For all the rest, there are no good reasons why you should try to change the stomach's pH. Likewise, the low vaginal pH due to the presence of beneficial lactic acid bacteria protects against infections such as Candida, and upsetting this pH (e.g. by douching) does more harm than good. The more tightly regulated pH levels such as blood pH are even more important for our health, and should never be messed with. Only when someone is suffering from the critical medical condition of acute metabolic acidosis will the blood pH level drop below the normal range, and is a bicarbonate IV sometimes indicated to keep the blood pH level at a proper level.

Despite all this, alternative medicine still claims that altering pH levels may have all sorts of beneficial effects. Most common are the usual vague claims of 'better health', 'boosting the immune system' and 'detoxing' through so-called alkaline diets (which, incidentally, are often remarkably similar to healthy dietary guidelines, i.e. less sugar, fat, and salt, and more fiber-rich veggies and fruits). These claims are bogus in that those diets don't change any pH levels in the body. Still, they are mainly harmless and can even be considered somewhat beneficial, since they promote a generally healthier diet. Then again, some of the more hardcore alkaline diets ban complete food groups altogether, which is by definition unhealthy.

Ingesting pure baking soda or vinegar is discouraged plain and simple, since these substances do not contribute significantly to a healthy diet, and can even have slightly harmful effects: baking soda messes with the stomach's acidity, especially in larger doses, and acids such as vinegar contribute to tooth decay. (There is nothing wrong, of course, with using vinegar to make a tasty salad.)

Then there are the outright scams, where people are urged to shell out hundreds or even thousands of dollars for completely useless water ionizers which claim to produce 'alkaline water'. Not only is ingesting alkaline substances useless, but the water these machines produce can also hardly be called alkaline (which would taste noticeably bitter at a pH over 8).

The most egregious claims, however, are aimed at cancer patients. Many types of cancer cells have a largely anaerobic metabolism even in the presence of sufficient oxygen, resulting in the production of lactic acid and thus a relatively low pH in cancerous tissues. For this reason, many alternative practitioners claim that increasing the pH will somehow damage or destroy cancer cells, not realizing that their reasoning is completely backward: lactic acid is primarily a waste product of cancer cells, not a fuel (which is glucose). And even if, according to some researchers, lactic acid appears to promote tumor growth and proliferation after all[4], introducing alkaline substances into the body does not affect these lactic acid levels, for reasons already given above. If one would succeed in increasing the intracellular pH sufficiently to interfere with this lactic acid metabolism, the patient would quickly succumb to acute alkalosis (which is exactly what happened to one of Simoncini's patients[5]).

Interestingly, Germans have this peculiar saying "Sauer macht lustig", which translates as "sour makes merry". Now there are quite a few substances that have the potential to make people merry, but acidic substances are not notably among them. According to German etymologists, the original saying was "Sauer macht gelüstig", meaning that sour foodstuffs were effective appetizers. Unfortunately, there is no conclusive evidence to confirm or reject this notion so far, so the real origin of this saying remains unclear. Then again, this hasn't deterred Germans (and other nationalities) all over the world from enjoying their Sauerkraut mit Bratwurst.

This alternative medicine-related article is a stub.
You can help RationalWiki by expanding it.
Retrieved from "https://rationalwiki.org/w/index.php?title=PH_woo&oldid=2453880"
Categories:
Hidden categories: