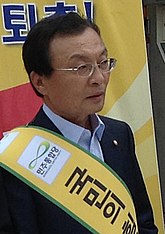 Lee "the liberal Trump" Hae-chan (이해찬, born July 10, 1952) is a politician in South Korea and the current leader of the ruling party Minjoo Party. This liberal politician has been a subject of controversies because his words and actions reminiscent of Donald Trump.

Human rights groups are still calling for his resignation, but people do not seem to be paying attention. He has largely kept away from controversies these days.

His remarks seem like the leader of the far-right party, but he is classified as a liberal politician in South Korea!

the Justice Party[note 3] unofficially lashed out at Lee Hae-chan's remarks, saying, "Lee Hae-chan's derogatory hate speech about minorities is very habitual!" In fact, if it were Europe, such hate speech would not only lead to the resignation of the party leader but also criminal punishment. As such, S. Korea is a socially conservative and authoritarian country. Its neighbor, Japan is not very free on this issue either.

This article is a stub.
You can help RationalWiki by expanding it.
Retrieved from "https://rationalwiki.org/w/index.php?title=Lee_Hae-chan&oldid=2113462"
Categories: