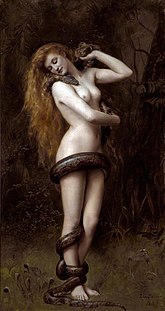 Her enjoying the company of a certain serpent.

Lilith was, according to medieval Jewish folklore, the very first wife of Adam before Eve — much earlier on. Lilith is also a fairly common first/given name, and has been the name of numerous characters in works of fiction, such as Lilith Pleasant on The Sims 2.

Lilith would have begun as a demon (lilin

) from the traditions of Babylonia and other cultures in that region (Sumer, etc.),[1] a tradition (whereby the demon stole babies at night) would end up percolating to early Judaism (at various times on the cultural fringes or militarily subjected to the Babylonian world). Like Lucifer, Lilith gets just one single mention in the Bible (Isaiah 34:14). Depending of the translation, the demon appears among animals considered unclean as an owl, or (as in the Vulgate

, a child-eating monster - half-woman and half-serpent - in Greek mythology. Modern scholarship consensus considers that the name "lilith" actually refers to an unknown nocturnal animal of the desert.[2]

Legends which come from the Jewish folklore, the first one that mentions her being the Alphabet of Sirrach of the 8th century (which could have actually been a satiric work) of the Middle Ages narrate how, after having been created by God,[3] Lilith was not happy at all to basically be below Adam in the pecking order and would have preferred to be above him, so she basically said her True Name and flew away. God, being pissed off and deciding that every day one hundred of her children would die, sent three angels to bring her back. They failed, but at least they were able to make her (also quite pissed to see so many of her offspring dying every day) leave alone those children who carried a magical amulet with the names of said angels:

Mother and queen of demons[edit]

Later traditions would elaborate more on this, claiming she married the archangel Samael (Satan, if you prefer so) being the mother of demons along other wives of him, all surrounded by a whole lot of basically demons (hosts, etc.),[5] with the marriage having been arranged by "Blind Guardian Dragon"[6] leaving him after the latter was castrated by God and looking for those men who have nocturnal emissions, explained as result of Lilith's lust.

Later on, she would come back to the Garden of Eden as the snake that would royally screw up things for everyone, even if God for all his omniscience seems not to have noticed she had both polymorphed into said animal and slipped onto said place[7] and existing medieval artistic representations of such event in which the Serpent is depicted as a woman (read: Lilith) with the lower part of the body snake-like tempting Eve.

Last but not least, to complicate things more, the "Treatise on the Left Emanation" claims there're two Liliths: one the treated here, and other lesser married to the demon Asmodeus, probably as less friendly as the former.[8] 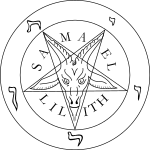 The Sigil of Baphomet

. No, the Hebrew letters around it do not spell "GOAT"

Lilith has ended up in Wicca, more or less sanitized and sharing properties with goddesses of the epoch as Ishtar or Asherah, having been claimed she was in those places a presumably much more friendly mother goddess of childbirth, children, women, and sexuality,[9][10] who ended demonized as patriarchy rose.[note 1][11] Others claim that Lilith is a dark moon goddess like the Hindu Kali[12], even if she as is currently known is a product from the Middle Ages Jewish mysticism as noted above.

Theistic Satanists, of course, often revere her, either as a goddess of independence, as one of sex,[13] or as a former fertility and agriculture goddess.[14]

It also goes without saying how said backstory, at the very least the first part where she does not want to be Adam's sex toy, explains her popularity among some feminist circles with some sympathetic modern portrayals of Lilith celebrating her choice of freedom over slavery and/or eliminating or at least downplaying elements as her child-eating habits or extreme lust. Also, while she does not appear at all in Christianism one has to wonder what would have happened with the consideration of women had she popped up there, knowing what brought Eve's mess-up in the Garden of Eden together with characters as Jezebel and Paul's (or whoever wrote Ephesians) thoughts on them.

The name "Lilith" has also been given to a claimed second moon of Earth, perhaps visible just to evil-aligned spellcasters thus explaining why nobody else has seen it, and to the apogee of the Moon's orbit (when it is at its farthest distance of Earth.)

Lilith is also present in modern occultism, often together with Samael and being considered there the opposite of Adam and Eve.

Of course depending of whom you ask and/or your level of nerdiness, Lilith may now be too-many-to-list different things, more or less related to the character discussed above. Besides appearing in a lot of heavy metal songs, most notably perhaps some by "Cradle of Filth", she (or rather something named like her) appears in "Neon Genesis Evangelion" as mankind's progenitor, impaled by the Lance of Longinus. Among many, many, other places, she also pops up in the "Darksiders" franchise as a demon queen, and of course in Dungeons & Dragons as a devil queen ruling as consort one of the Nine Hells of Baator. There is also her appearance in The Binding of Isaac: Afterbirth as a playable character, who is not only blindfolded and can only fire via her Incubus companion, but also comes with the delightful gimmick of becoming increasingly more pregnant as she takes damage, eventually giving birth to a small demon follower who will aid her.