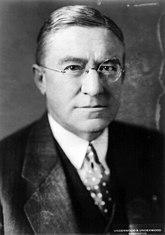 Louis Thomas McFadden (1878–1936) was a Republican member of the House of Representatives from Pennsylvania who served from 1915 to 1935. He was a far-right populist who is often remembered for two things:

Prior to (finally) being voted out of office, he was a staunch opponent of the Federal Reserve because he believed that Jewish banking interests were controlling the Fed.[1] He even said the Fed (and presumably the Jews) had purposely caused the Great Depression. Apparently, he also believed the Roosevelt Administration was controlled by Jews, and he irritated Roosevelt when McFadden didn't want Henry Morgenthau Jr., a Jew, being appointed Secretary of the Treasury.[2]

Because that's not enough, he also accused Wall Street of funding the Russian Revolution.

He also did his best to befriend Nazis, with McFadden repeatedly praising Adolf Hitler and, in turn, the pro-Nazi tabloid Der Stürmer praised McFadden.[3] McFadden also tried to buddy up with fascist William Dudley Pelley,[4] leader of the Silver Shirt Society.

Republicans eventually denounced McFadden as "crazy"[5] and he lost his seat in 1935 despite running as an incumbent in a heavily Republican district. He briefly tried to run for president on the platform of keeping Jews out of the Republican Party but eventually stopped due to lack of support.

McFadden (finally) died of heart complications in 1936, but he has become something of a hero to some anti-Semites on the internet. Of course, some anti-Semites think he was poisoned, as do some libertarians who think he was killed for speaking out against the Fed.[6] The more libertarian types tend to gloss over his anti-Semitism. McFadden's legacy lives through his helping of getting the ball rolling on the "Jews control the Fed" conspiracy theory. Interestingly, his vehement anti-Semitism and Third Positionist economics also makes him one of the few American politicians you could justifiably call a strong Nazi-sympathizer.