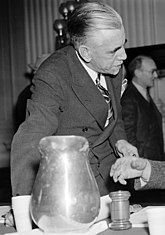 William Dudley Pelley (1890–1965) was an American fascist politician and writer on mystical topics. He founded the Silver Shirts, formally the Silver Legion of America, an exremist syncretic[1] anti-Semitic paramilitary organisation in the early 1930s which planned to stage a revolution and set up a white "Christian Commonwealth" revolving around wealth distribution determined on the basis of servitude towards a central state which would run the entire nation as a corporation.[2] After the outbreak of World War II, Pelley was arrested and prosecuted for sedition and treason by the federal government under the direction of President Franklin D. Roosevelt and the congressional Dies Committee

. He was jailed until 1950, after which he was forced to give up fascism but continued writing nonsense about UFOs.[3]

Pelley was born in Massachusetts. His father was a Methodist preacher. He worked as a journalist and short story writer, eventually winning two O. Henry awards for his fiction and working as a screenwriter in the early 1920s (notably on the Lon Chaney dramas The Light in the Dark in 1922 and The Shock in 1923; his novels The Fog and Drag were also filmed in the 1920s).[4] But following work for the Methodists, around 1920 he was involved as a journalist with the Red Cross in the Russian Civil War, alongside the White Russians against the communists. This inspired his fiercely anti-communist politics, which were tainted by the idea that communism was an international Jewish conspiracy — rejection by Jewish Hollywood executives probably also contributed to his anti-semitism.[5]

His interests went beyond politics: in the late 1920s he wrote accounts of what would later be characterized as near-death experiences or out-of-body experiences in the essay "Seven Minutes in Eternity", notably published in the large-circulation American Magazine in 1929, and expanded into a 1933 book Seven Minutes in Eternity: With the Aftermath.[6] From this vision of a world free of strife and disharmony, he constructed a strange religion blending spiritualism, theosophy, Rosicrucianism, and a belief in the mystic powers of the Pyramids. Pelley claimed to have undergone death, entering heaven, and returning to North Carolina in pursuit of overthrowing the federal government.[7] Anti-Semitic racist Gerald L. K. Smith

, then an active acolyte of Huey Long, would join his seditious movement.

To spread his ideas, he founded Galahad College in 1932, with an associated publisher, Galahad Press.

The Silver Legion of America, otherwise known as the Silver Shirts, was an American fascist organization headquartered in Asheville, North Carolina. Its existence was announced in 1933, following Hitler's rise to power and with Pelley claiming an endorsement from Jesus. Members wore silver-colored shirts with blue ties, blue corduroy pants, and broad-brimmed "lemon-squeezer" hats in the style now favored by Mounties and scoutmasters. Their logo was a scarlet letter "L," which supposedly stood for Loyalty, Liberation, and Legion.[8] The flag of the movement was an "L" in scarlet onto a white background. Within the movement, Pelley was known as "The Chief"[5] in the same vein Nazi German dictator Adolf Hitler was called Führer and Italian Fascist leader Benito Mussolini was referred to as II Duce.

The Silver Shirts was one of a number of far-right "shirt" movements of the 1920s and 1930s, including the original Blackshirts of the National Fascist Party in Italy, the Sturmabteilung (SA)/Brownshirts in Nazi Germany, the British Blackshirts of the British Union of Fascists in the United Kingdom, the Iron Guard of Romania, Hungarian Nazi Party and Brazilian Integralist Action Greenshirts of Hungary and Brazil, the Blueshirts of Army Comrades Association/National Guard/Young Ireland/League of Youth in Ireland and the Goldshirts of the Revolutionary Mexicanist Action in Mexico, et cetera. There were also the earlier Redshirts, a Reconstruction-era paramilitary organization in the Southern United States.

The Silver Shirts' policies reflected Pelley's interests, which included racism, anti-Semitism, American nationalism and white nationalism; ideas about reforming Christianity without a Jewish influence (three of said ideas were derived from the Nazi Party); British Israelism (the notion that the British, and hence their American descendants, were one of the lost tribes of Israel) essentially a precursor to Christian Identity, isolationism; extreme jingoistic patriotism; and opposition to Roosevelt's New Deal, and communism. Pelley planned to set up a "Christian Commonwealth" exclusively for white Americans only and talked about seizing power in a "silver revolution", as Mussolini had before. His ideas were spelt out in numerous publications, including his 1939 autobiography The Door to Revelation.[6]

of South Carolina. The "prophecy" contained a rant against Jews allegedly made by Benjamin Franklin. There is no evidence of Pinckney's diary prior to 1934, and no other evidence of anti-semitism in Franklin's writings, suggesting it was a forgery by Pelley or someone close to him.[9] By 1939, he had expanded his theories into claims that a representative from Heaven had authoritatively revealed a hierarchy of human races with blacks at the bottom and whites at the top.[6]

Pelley's supporters included the mysterious heiress Jessie Murphy, who gave the land that became the Murphy Ranch in Rustic Canyon, Los Angeles (near Will Rogers State Historic Park), designed as a self-sufficient base for American fascists by Winona and Norman Stephens with the encouragement of a German named Schmidt (oddly, the main gates were designed by the African-American California architect to the stars Paul Williams.

) The ranch remained a picturesque ruin for decades, briefly used as an artists' colony, but it was prone to wildfires. It was demolished in 2016.[10][11][12]

In 1936, Pelley stood in the presidential election as the candidate for the Christian Party

, the political wing of the Silver Legion, but received only 1,600 votes; Willard Kemp was his vice-presidential candidate.

At its peak, the Silver Legion had perhaps 15,000 members (half that of the more mainstream fascist and pro-Nazi German-American Bund) and by the late 1930s, this had fallen to around 5,000.[8][5] In the late 1930s, it became more overtly violent; Pelley had an entourage of 40 bodyguards, and he told members to keep a shotgun and 2,000 rounds of ammunition at home to protect themselves and white Christian America. In 1939, the Dies Committee, a congressional committee investigating extremists on the left and right, reported on the Legion, leading Pelley to fear a crackdown on the group. By then the organisation was already in decline, facing a schism between mystics and more practically-minded Nazis.[6] The Japanese attack on Pearl Harbor on December 7, 1941, and the United States' entry into the Second World War against Japan and Germany made life even harder for subversive elements and particularly fascists. The police moved swiftly to occupy the legion's property and detain prominent members from December 8, 1941. With the group effectively proscribed, it rapidly dissolved.

Following the US's entry into World War Two, he continued to pen attacks on Roosevelt and the government, claiming that the government had lied about the damage to Pearl Harbor. A soldier was found with a copy of one of his publications, Galilean, leading to charges that he was threatening America's morale and willingness to fight.[6] He was put on trial for a long list of offences including high treason, obstructing military recruitment, interfering with the operation of the military, and conspiracy, and was convicted of several counts, mainly for sedition. He was sentenced to 15 years in jail in 1942, later being released in 1950.

His parole conditions required him to avoid political activity, but he continued to write on mystical topics including UFOs: Star Guests (1950) is the best-known work. He now claimed that an alien or "spaceman" would descend to Earth and free the planet of violence and other base instincts and elevate the human race to some kind of heavenly perfection (similar to that which he had experienced in his "Seven Minutes" vision).[6] In the 1950s, he was close to George Hunt Williamson, an author of books about extraterrestrial contact whose works were inspired by Pelley and George Adamski.[3]