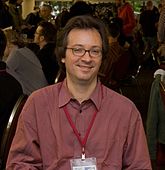 Ted Rall (1963–) is an award-winning American essayist, cartoonist, and journalist. He is an atheist, but this is not central to his work or public persona. His has been a unique voice beginning with his 1994 NY Times editorial "Why I Will Not Vote". He gained a tremendous amount of good will for appearing at #15 on Bernie Goldberg's 110 People Who Are Screwing Up America list.[1]

It's fairly jaundiced. He believes that the American two-party system is really one party that plays bad cop/worse cop with the electorate. He laments a complicit lapdog press that helps Americans feel good – superior, even – about their ignorance of world events and opinions. The blame ultimately rests on the American people, though, for swallowing this tripe and doing nothing.

Ted Rall can't draw, in much the same way the Ramones couldn't play guitar and Meg White can't drum. Remember how everyone deservedly mocked the webcomic Ctrl-Alt-Delete for B^U face? Rall has used sub-Family Circle quality art in his cartoons since before the new millennium began, but he still wound up with syndication.[2] Even after working as a cartoonist for decades he has absolutely zero need to draw characters with distinctive faces or body types, and drowns half his cartoons in walls of text, that being their salient feature.[3]

Where someone like Harlan Ellison might use the scalpel [4] or the cleaver, [5] Rall can be counted on to reach for the chainsaw every time. [6] His research can be slapdash, but he will reverse himself when warranted by the facts. Just as an example, when former Arizona Cardinals player Pat Tillman was killed in a friendly fire accident, Rall drew a cartoon depicting Tillman as a racist, trigger-happy idiot who only signed up to kill Arabs.[7] Tillman was in fact an outspoken secular humanist who joined the military to fight against the frothing fundamentalist nutbags who killed thousands of Americans and held women's rights over a barrel. Tillman was also a critic of President George W. Bush who viewed the invasion of Iraq as illegal. Conspiracy theorists claim that he was deliberately murdered by his fellow soldiers for his political views.[8] It took a year, but when these facts became public, Rall offered a full retraction and apology.[9]

In this one[10], the focus is on how the titular president is about the best we can expect to get from the two-party system as is now. Articulate and nuanced, he was swept into office with the mandate and presumably the ability to improve the U.S.’s economy and repair its standing in the world. Instead, he did exactly as he promised during the campaign, doubling down on most of the sonny-Bush policies and making cosmetic changes to others.

It would have been straightforward to pull out all the old Roosevelt blueprints to get an economy out of a Depression. A large and sorely-needed round of infrastructure repair would have put money in the hands of the consumers who drive 70% of the GDP. It was inevitable that Obama was going to be attacked as a socialist. The economy might have been better served if he had worn it, clawed back Bush’s TARP to the extent possible, and just nationalized any banks that failed.

The decision to pull most of Our Troops (and Our Mercenaries) out of the meatgrinder in Iraq was largely contravened by the surge in Afghanistan. Rall makes a convincing case that if we really had to attack someone over 9/11, then Egypt, Pakistan, or Saudi Arabia would have been a better choice. Re-introduction of habeas corpus and renewed commitments to the Geneva Convention and the Reagan-era CATT[11] would have returned some of our moral standing and improved the outlooks of any of those troops who are captured.

This is all enabled by a non-adversarial press that doesn’t report non-“duopoly” opinions and adopts propagandizing terms; e.g., saying that CEOs “earn” a seven-figure salary when it would be more accurate to say they “are paid” that much. Rall points out that while there was lively debate of the forensic engineering in Deepwater Horizon (“Obama’s Katrina”), no one was asking why BP was given a permit to drill at that depth in the first place.

However complacent the populace, Rall believes that A Revolution is coming, mainly because things are unsustainably bad. He sees hope for change (as it were) deriving from Occupy and, in a horseshoey sort of way, the Tea Party.

This compilation[12] is an informative guide to a part of the world that often gets a cursory, and-the-rest sort of attention[13]. The “stans” (Turkmenistan, Uzbekistan, Tajikstan, Kazakhstan, Kyrghyzstan; sometimes Afghanistan, sometimes Xinjiang) were once known mainly as the forbidding central part of the trade route between China and the Mediterranean. In the 1800s, they were the setting for the “Great Game”[14] for regional dominance between Russia and the British Empire via India. The book varies in tone between high school history/geography text, graphic novella, political opinion, and travelogue. Chapters are drawn from a ten-year span of traveling in and writing about the region. In describing the various ethnic groups, there are brief summaries of their early history, but the focus is on the fallout of the breakup of the USSR and events since then.

For years after the Soviet collapse, a mixture of apathy and inertia caused the ex-SSRs to continue as the corrupt fiefdoms they had been. Any planes of the now-defunct Aeroflot that happened to be parked at a Central Asian airport were simply grabbed and subsumed into a series of “baby Flots”. In the absence of any better idea, visas and passports with the CCCP imprint continued to be issued and honored. Governments are run mostly along autocratic strongman lines. The exception is Kyrghyzstan, where they had an elected leader until the IMF withdrew its backing (funny, that). When the president would not order his troops to fire on demonstrators, he was replaced by a series of dictators.

The far western Chinese Xinjiang Uyghur Autonomous Region sits at the eastern end of Central Asia and shares its history of a nomadic population which is majority-Muslim today. Suppression of the Uyghurs by the Chinese (like that of the Tibetan Buddhists) is seen less as a matter of doctrinaire Marxist materialism and more a result of bureaucratic dickishness and a desire for homogeneity of the population. Like others, the Uyghurs once saw America as their ideological allies and potential supporters against Asian Communism. What little traction this idea might have had went out the window when Chinese help in the War on Error became a perceived need after 9/11.

The impetus for a new Great Game has been vast stores of petrochemicals discovered in the region, especially in Kazakhstan and Uzbekistan. The goal is to control the pipelines that will bring these reserves to deepwater ports for shipment to the consuming markets. China has a much greater interest this time around. Their approach is more economic and long-term, while the U.S. and the Russians are concentrating on getting as much firepower as possible into the area and currying favor with whoever’s in charge to secure sites for bases and airfields.

In much the same way as The Good Doctor, Rall believes that the best way to learn about and report a story is to become a part of it.[15] The descriptions of his several trips through Central Asia as a reporter and/or tour guide make for ripping yarns and useful pointers for any who might follow. The food consists almost entirely of meat on a stick, often inflicting achy breaky colon on Westerners (hence the expression “Silk Road to Ruin”). Traveling is fraught with checkpoints, each manned by a different set of functionaries running their personal version of Let’s Make A Deal. Prizes range from a hale and hearty handshake of farewell to outright thievery to a jolt in prison. So bribe, but don’t over bribe; be friendly, but don’t be a pushover. It’s not all diarrhea and skittles, though. At one point, Rall talks a Taliban member out of killing him. The Taliban then mentions - pre-9/11 – that they are going to bring the war to America in America.

The benefit of hindsight shows that the stans have not become the fulcrum of global politics that Rall envisioned. Unless it has, and They just don’t want us to know. The passing of Turkmenistan’s president-for-life in 2006 ushered in a new leader who was about as bad, though less unhinged. The area is worthy of our continued attention. Propping up dictators who claim to be beset by Muslim extremists is short-sighted at best.

This is just a weird little book[16]. From the title to the uncharacteristically beardy author photo to the words “Fight Back” in big red letters on the back cover, it would appear to be a pastiche of the Communist Manifesto. It works as a well-documented list of complaints, but falls short of offering any concrete solution.

The American political system is broken. Corporations buy politicians who write laws to make it easier for corporations to buy them. A non-adversarial press reports it as normal that this is all perfectly legal[17]. Whether you’re a right-winger who wants to stop abortions or a left-winger who wants to stop trade agreements, there is no one to vote for who can both win the election and effectuate change. People don’t stay away from the polls because they don’t care. They care, they have just been weaned away from expecting their vote to mean anything.

With the possibility of working within the system eliminated, Rall opines that passive, non-violent resistance has never accomplished anything unless it was backed up with the threat of violence. This seems counter-intuitive, but his argument is at least internally consistent. So clearly, the only reasonable course of action is to get together with a bunch of friends and…do something. What, specifically? It gets real vague real fast. This makes the book come off as something of a damp squib. Worse, it may give perceived encouragement for the differently-brained to go to town[18].

In May of 2014, Rall was hired as a columnist for Silicon Valley newspage Pando. His feuds with Goldberg and Ann Coulter were even named as brownie points when he was hired.[19] However, within a month, he was fired.[20][21]