The State of Qatar (a.k.a. Saudi Arabia's little brother) is a country on a peninsula and future island[1] located in the Persian Gulf to the east of Saudi Arabia. The country offers yet another example of a resource-rich Gulf Arab monarchy which exerts tremendous influence on the regional turmoil and is hopelessly mired with domestic issues of human rights and other political nutjobbery. The capital city, Doha, a town akin to Dubai, used to be a desert nowhere merely 20 years ago and suddenly came to experience exponential growth, becoming a regional logistics and financial center, and holding sporting events and whatnot.

Qatar, famed for having too much cash in the ass, has a GDP per capita of $129,360, the highest in the world. This is due to its territory sitting on top of the world's third-largest natural-gas reserves and some oil reserves as well.[2] However, there's also some simple math involved here: the country's population includes a whopping 88% foreign labor (imported from South and Southeast Asia and from its poor Arab neighbors).[note 1][3] The treatment of these workers is so bad, with many being abused by their employers, underpaid or not paid at all, forced into severe debt, and often living in migrant camps with poor conditions away from the rest of Qatar, that many human rights activists consider Qatar an apartheid state.[4] This makes the number of Qatari citizens just 313,000, who are exempt from low-skill jobs and covered by free healthcare and education. All the floating money is considered spent on the FIFA corruption scandal (see below), on the military budget, and on destabilizing the regional geopolitics by funding the Muslim Brotherhood and arms-supplies to the jihadists in the Syrian Civil War.[5]

Qatar also has a reputation as a safe haven of the Wahhabi strain of Salafism, which is the majority religion among the citizens.[6] Strict Sharia provides the main source of Qatari legislation, which features hudud

criminal codes, including stoning[7] as a legal punishment, and the death penalty for apostasy or for homosexuality.[8]

All in all, these quaint local manifestations of traditional culture make Qatar eerily similar to Saudi Arabia, but the two countries are actually hostile toward each other, most likely because both are way too full of egos. The two countries are undergoing a diplomatic crisis, accusing each other of being a terrorist-sponsoring state. The dispute has evolved to include regional hyenas like the Ayatollah's Iran and Erdogan's Turkey, becoming nothing but a disturbance to the already precarious regional geopolitics.

Qatar has been involved in a highly publicized diplomatic crisis between Saudi Arabia and its sidekicks, including UAE, Egypt and Bahrain. The crisis began by the latter severing diplomatic and trade relations in June 2017,[note 2] which was unprecedented and it surprised many analysts as it escalated way too quickly. No one knows the truth behind the scene of the conflict. One thing for sure, the consequence, whether it was calculated or not, is dire and has the potential to dynamically alter the scenario of the dirty Middle Eastern geopolitical game. The pretext was that Qatari state TV's news ticker showed quotes supposedly from the Qatari emir praising Iran and trash-talking Arab Gulf leaders; US intel concluded that the UAE hacked Qatar's state TV and planted the fake quotes.[9] Despite this news, the UAE, Bahrain, Egypt and Saudi Arabia still got away with it because Trump.

Diplomatic tension between Qatar and Saudi is actually not new, and this is due to Qatar's selfish ambition to be more independent in order to keep the royal family in power.[10] But the '17 crisis was effectively a "Brexit referendum" on this relationship. One indirect catalysis is Arab Spring, in which Qatar, which favors change, supported the Islamists taking over the coups, and Saudi Arabia, which favors the status quo, opposed it by propping up the despots.[note 3] During this time, Qatar aided the Muslim Brotherhood (MB) by accepting the asylum of its members.[11] Al Jazeera, being Qatar's official mouthpiece, cheered the coups like no other. On the contrary, Saudi Arabia, which was a backer of MB for half a century,[12] designated it as a terrorist organization in 2014. The sidekicks also followed its lead.

In April 2017, Qatar struck in a deal with Shiite militants in Iraq who took Qatari royals as hostages. Qatar, in exchange, released royals and humanitarian aid passing through the area, paid $700 million to a Shiite militia which infuriated Saudi and the UAE. Shortly after, the Qatari government web site was hacked and the fake official statement which gave approval of Iran was released, and it became a casus belli for diplomatic sanctions. The hacking was considered an ongoing attempt between Qatar and Saudi coalition to forestall each other, but Russian hackers were also accused.[13][14]

The implications, besides the annoyance of innocent bystanders who had to cancel their transit flights through Doha, have been huge. The proxy war between Qatar and Saudi Arabia led to the ascendance of hyenas and jackals like Iran and Turkey within the Middle Eastern geopolitical arena. Qatar, which used to be rather neutral in terms of Saudi-Iran proxy war, began publicly approaching Iran as they provided diplomatic and humanitarian support.[15] "Sultan" Erdogan's Turkey, which has been independent and looking for chances to expand its Ottoman ambitions, announced humanitarian and diplomatic support. It has also deployed additional military troops to a Turkish base in Qatar.[16] The crisis also led to the exposure of the vulnerability and limit of Saudi potentiality. Led by young prince Mohammad bin Salman, the Saudi coalition has consolidated its alliance by gathering several other Sunni Muslim states, and unleashed the utmost fury by pulling off the maximum they could do short of exercising military force to compel Qatar. This, however, didn't bear any fruit as Qatar didn't compromise on any demand posed by the Saudis. In effect, Saudi Arabia gave its arch-rival more strategic opportunities, created discord among the supposed "Sunni Muslim bloc", annoyed its boss in the White House for benefiting Russia and Iran which seek friction between U.S. allies, and exposed the limit of its diplomatic potential by being unable to compel its tiny little neighbor.[17]

By 2021 the diplomatic crisis was mostly resolved without Qatar not meeting any of the demands of the other nations. Which has led to whole thing being seen as a failure by Saudi Arabia and the UAE, as Qatar actually developing closer ties to Turkey and Iran (which the other nations wanted to not happen) and the country being considered economically and militarily stronger and more autonomous than it was before the crisis.

and his cabal actually chose Qatar as the 2022 host of the FIFA World Cup. The ridiculousness of this choice and the absence of re-selection cannot be overemphasized, considering that the FIFA evaluation report prior to the selection pointed out the possible health risk for the players and supporters.[18] There are also countless countries, broadcasting networks, entities, and individuals bribed or accused of bribery including:

An investigation by The Guardian in 2013 claimed that migrant workers are effectively treated as slaves by denying them food and water, and by not paying them on time or at all. It also claimed that 4,000 migrant workers have died since 2010.[27] The Wall Street Journal has also claimed that 1,200 workers died in 2015,[28] but the number and the actual conditions are disputed, with BBC claiming it includes migrants working outside of World Cup venues and non-construction workers.[29] Also BBC cited a claim by the Indian government official which stated that the death rate of Indian worker in Qatar is lower than in India.[29] Qatar agreed to improve the conditions of workers barely in late 2017.[30] According to the 2016 Global Slavery Index, an estimated 30,300 people are enslaved in modern day Qatar, or 1.36% of the population.[31][32][33]

Meanwhile, the aforementioned crisis between the Saudi gang has been somewhat disturbing the prospect of holding the World Cup. This is due to Saudi, UAE, Egypt and Bahrain having effectively cut off the only land border, and some sea and air routes. FIFA however, is not anticipating on finding a "plan B".[34]

It's not just FIFA, though. The IAAF also chose Doha to host the World Athletics Championships in 2019, which visibly had an extremely low attendance.[35] IAAF president Sebastian Coe decided to blame the media for reporting what they could actually see.[36] 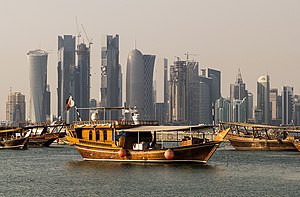