The State of Kuwait is an Arab state at the very tip of the Persian Gulf and wedged into Iraq. It's not too big, and the land it does have is primarily harsh desert sand. The important part is what's underneath that sand: shitloads of oil. Its capital is Kuwait City.

Kuwait historically was also an important commercial and trade center due to its strategic location in the Persian Gulf. In order to avoid being swallowed up by the Ottoman Empire, though, the Kuwaitis struck a deal with the devil in 1899 and agreed to become a protectorate of the British Empire. Unfortunately, that protectorate didn't do much to protect Kuwait from other ravenous neighbors like Saudi Arabia, as the British were invested elsewhere and preferred to diplomatically pawn off Kuwaiti land.

After the end of World War II, though, Kuwait's fortunes turned around thanks to the rapidly growing global demand for that sweet, sweet oil. Even better, the Suez Crisis in Egypt convinced the British to rapidly withdraw from Kuwait as well, meaning that they could keep the cash for themselves. Kuwait used oil revenues to build themselves a greatly developed civilization in the desert. They also used a lot of that money to advance its geopolitical agenda, most notably supporting Saddam Hussein with financial aid during the Iran-Iraq War. At the war's end in 1988, Hussein ended up critically in debt to Kuwait, and the Kuwaitis refused to forgive any of it. Pissed off and desperate, Hussein ordered a rapid invasion and annexation of Kuwait in 1990. Of course, you can't fuck around with an oil-rich country with impunity. The United States and the United Nations assembled a coalition of oil-interested countries to to attack Hussein's forces and drive them out of Kuwait. This was the Gulf War, also known as the First Iraq War.

Since then, Kuwait has been a staunch US ally in the region, even allowing itself to be used as the US' springboard for its 2003 invasion of Iraq. Kuwait has also cautiously and slowly begun to liberalize itself, but it remains effectively an absolute monarchy led by the House of Al Sabah. Kuwait is also a close friend of Saudi Arabia, and strict fundamentalist interpretations of Sunni Islam shape its legal system. Perhaps worst off are the many foreign workers in Kuwait, who are held under the kafala system that enables their severe exploitation and mistreatment.

Kuwait, as stated above, is a barely-hospitable desert hellhole, so it's not terribly surprising that there wasn't a whole lot of action here in ancient times. Around 1800 BCE, though, the Mesopotamian Dilmun people from nearby Bahrain settled the Kuwaiti island of Failaka.[3] They did this in order to build a trade post, aiming to cash in on the Persian Gulf trade routes. Money talks and money walks.

Over time, conquerors like Alexander the Great blew through, eventually followed by the Sasanian Persian Empire. During the period of Persian rule, the mostly pagan Kuwait came under attack by the followers of Muhammad. In 636 CE, the Rashidun Caliphate smashed the Persians in the so-called Battle of Chains, ensuring Arab domination here going forward.[4] The Arab occupiers did some remodeling, building themselves a city called Kāzimah.[5] The city functioned as an important center of trade in the region, bringing merchants from all over the Muslim world. Constant exposure to the Muslim religion through both rule and trade brought about the rapid conversion of the population.

After a brief stint of Portuguese rule in the early 1500s, Kuwait was well and truly settled for the first time by the Bani Utub tribe. Through a series of internal conflicts, the House of Al Sabah came out on top, becoming the monarchs of the Kuwaiti nation.[6] As the primary port between Baghdad, western India, and Arabia, Kuwait became rich and independent enough to start developing its own cultural sense of self.[7]

Kuwait evolved into an merchant oligarchy, as trader families struck political marriage alliances and competed against each other to control Kuwait's politics and economy.[8] These elite families sent their children abroad to receive educations in Europe and brought European-style technologies and management styles back home.

Kuwait's role as a trade port brought it into repeated contact with the British East India Company. It was strategically located between the UK's main colonial production center, India, and its primary market, back home. Unfortunately for them, though, Kuwait's role in trade faced competition from the Ottoman-controlled port of Basra in Iraq.[9] The Turkish Ottoman Empire didn't take long to decide that Kuwait either had to be destroyed or conquered to ensure Turkish dominance over Persian Gulf trade.

In order to save themselves from Ottoman conquest, the rulers of Kuwait appealed to their British friends for protection. In 1899, Kuwait became a protectorate of the Empire, allowing British control over their foreign affairs, exclusive arrangements for British ships in their ports, and British military occupation.[9] As you can imagine, the British quickly leveraged these agreements into increasingly overt control of Kuwait.

Within the British Empire, though, Kuwait's role was relatively minor due to its lack of natural resources in the desert. It simply functioned as a port and didn't even act as a reliable ally like other protectorates would have. For instance, in World War I, the emir of Kuwait stonily and stubbornly refused to support the British or join the conflict.[10] Of course, dying pointlessly in a war between colonial powers would have been stupid for them, but the British didn't quite see it that way.

Not too long after this, though, the British got back at Kuwait. Right after the war, Ibn Saud of Saudi Arabia invaded Kuwait in an attempt to annex it into a greater Arab state.[11] British military involvement to protect their protectorate was minimal. Then, in 1922, the British sent High Commissioner Percy Cox to hand off a giant chunk of Kuwait's territory to the Saudis in exchange for peace.[12] Kuwait wasn't invited to the negotiations. You can understand why they were very pissed off about this arrangement.

Kuwait started drilling oil in significant amounts after World War II, but it stayed neutral in that war and took measures to keep the profits to itself.[13] After Britain's humiliation in the Suez Crisis, they started looking for a way out of the Middle East. The always uncooperative Kuwaiti protectorate was a good example of dead weight that needed to be dropped. The British were out by 1961, with the breakup being relatively amicable.

Kuwait City in 1961. You can tell they're modernizing because there's already ads for Pepsi.

After independence, Kuwait developed rapidly with its oil money. In the 1960s and 1970s, Kuwait was by far the most developed country in the Persian Gulf region.[14] It was also the first Gulf state to establish for itself a constitution and a legislature.

Kuwait was also surprisingly far-sighted with its economy. Economic planners there realized that a country can't safely survive on just one trade good. Therefore, Kuwait diversified its economy to focus on international finance as well, creating the world's first sovereign investment fund.[15]

Unlike its neighbors, Kuwait combined its international trade importance with genuine societal progress. Kuwait had a largely free press, and one of its magazines, Al Arabi, became the most popular in the region.[16] Kuwait's literary and writing scene is still diverse. Kuwait also embraced Western dress to the point where more of its women chose to wear miniskirts than hijabs.[17]

Unfortunately, though, all wasn't well. Most of Kuwait's wealth and power remained concentrated in the hands of its oligarch families, in a continuation of Kuwait's old traditions. Kuwait's wealth was also made off the backs of oppressed foreign workers, particularly from places like Palestine whose people had nowhere else to go.[18]

Kuwait Airways Flight 422, which was hijacked by Iranian proxies in 1988.

In 1984, Iran also sent its proxy Hezbollah to hijack a Kuwait Airlines flight and redirect it to Tehran, where people were killed and held hostage.[21] Iran did it again in 1988, hijacking another Kuwait Airlines flight in the longest airline hijacking in history, resulting in two fatalities.[22] That second time was in order to demand the release of the captured bombers from Iran's first attempted attack.

If all of that wasn't enough, Iranian proxies also tried to blow up the Emir of Kuwait's motorcade in 1986.[23] Damn, Iran went crazy.

Although Iraq didn't lose anything in the eight year war, they didn't gain anything either. Even worse, Iraq was mired in $37 billion worth of debt, much of it owed to Kuwait.[25] Hussein went to Kuwait with a request to drop the debt, hoping that Kuwait's earlier support meant that they were friendly. Kuwait refused because money is money. Furious, Hussein later claimed that Kuwait was apparently stealing oil from Iraq by drilling diagonally under the border.[26]

War properly broke out in 1990, when Hussein cited an island dispute as casus belli for an invasion of Kuwait. The operation lasted two days thanks to Iraq's huge military forces, and Kuwait entered into a seven-month occupation.[27] Hussein first set up a puppet "republican" government, but later dispensed with pretenses and and annexed the country outright.[28] This act of aggression combined with the probable threat towards Saudi Arabia, prompted the US and NATO to station almost a million troops in the Arabian peninsula.[29]

The UN ordered Iraq to back the fuck off, and when Saddam predictably didn't do that they imposed a destructive worldwide ban on trade with Iraq.[30] The US then assembled a coalition to attack Iraq, including the UAE, Morocco, Turkey, Egypt, Syria, Senegal, South Korea, Qatar, Oman, and also Honduras for some reason.[31] Following more defiance from Saddam, the UN Security Council passed Resolution 687, which authorized the coalition to use "all necessary means" to uphold the previous resolutions and liberate Kuwait.[32]

A short campaign later, Kuwait was free from Iraqi occupation. On their way out, though, Iraqi forces set many of Kuwait's oil wells on fire, causing a months-long environmental catastrophe.[33] 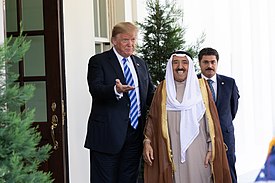 The Gulf War caused a significant change in relations between Kuwait and the United States. Kuwait went from being lukewarm towards the US to being a staunch regional ally. Kuwait agreed to host US soldiers abroad, which the US just loves to do in the Middle East. That arrangement paid dividends to both parties in 2003 when the US used Kuwait as a springboard to send 100,000 soldiers into Iraq.[35]

That relationship continues to this day with the US selling weapons and providing military training for Kuwait.[36] Perhaps in response to its relationship with the US, Kuwait has slowly moved to further advance its society. In 2005, for instance, Kuwait granted women the right to vote.[37] In 2015, Kuwait was ranked first among all Arab states for women's rights by the World Economic Forum.[38] Moving forward, Kuwait hopes to diversify its economy further and reduce its dependence on the oil trade.