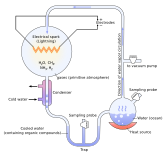 Schematic of the Miller-Urey experiment

The Miller-Urey experiment was a 1952 experiment by Stanley Miller and Harold Urey of the University of Chicago that synthesized the environmental conditions that were thought to be present at the origin of life. The intention was to observe if abiogenesis could have taken place under the circumstances then believed to represent the early Earth; the result, after passing an electrical discharge through an atmosphere made up mostly of methane, ammonia, water, and elemental hydrogen was a water soup of various amino acids and a few other recognizable biomolecules.

The state of understanding of early Earth chemistry has changed somewhat since then (a nitrogen-carbon dioxide atmosphere is now considered more likely than Miller and Urey's mixture), but even though the Miller-Urey conditions are no longer widely accepted, the experiment did successfully prove that the basic building blocks of life could form spontaneously in nature without intelligent intervention.

Additionally, a re-analysis conducted in October 2008 by Jeffrey Bada of the Scripps Institution of Oceanography in California and colleagues showed that 22 amino acids were created in one apparatus of the Miller-Urey experiment, rather than the 5 that were purportedly found in the 1953 publication of the original experimental results.

In 1995, Miller and colleagues conducted another experiment (with a more accurate recreation of Earth's early conditions). They had similar results through the release of energy into simple compounds and elements (mostly carbon and water). In Miller's experiment, uracil and cytosine were produced. These are two of the bases found in RNA. Subsequent experiments have yielded similar results.

Also the name is kind of funny because Harold Urey's last name sounds like urea, which was the first synthesized biological molecule, an early bit of counterevidence for vitalism.