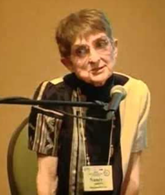 Nancy Appleton (1935–2019)[1] was an American nutritionist, low-carb promoter and anti-sugar campaigner. She was associated with the pseudoscientific Cancer Control Society.[2]

Appleton had a BS in clinical nutrition from UCLA and PhD in health services from Walden University.[3] She authored a series of books which claimed that refined sugar upsets body chemistry and devastates the endocrine and immune systems, and which results in a host of diseases. Appleton linked almost every disease to sugar consumption.[4]

On her website (which is still online), Appleton posted "141 Reasons Sugar Ruins Your Health".[5][6] In theory, Appleton's crusade against sugar was not irrational but she would sometimes make sensationalist claims and insert dubious information about sugar into her books. For example, she once asserted that drinking soda is like drinking battery acid.[7]

Appleton would only rarely cite recent systematic reviews as references which is the way evidence-based medicine works. Instead she would cite outdated sources or studies with small sample sizes.[8] Her publications were not peer-reviewed and were entirely ignored by the medical community but her book Lick the Sugar Habit became a bestseller.

Various alternative medicine and low-carb groups have taken interest in Appleton's books. They were advertised by the Cancer Control Society and sold by the Price-Pottenger Nutrition Foundation,

which promotes the crackpot ideas of Weston Price.[3]

Unlike other low-carbers (e.g. Gary Taubes), Appleton was not a cholesterol denialist. She was extremely thin and may have suffered from anorexia.[9]