Pete is best known for his role as a judge on the highly popular Australian television show MKR (My Kitchen Rules).

He is also notorious for writing a self-published cookbook for babies.

The Paleo Way website was created by Evans in 2013, and it described itself as a guide for anyone wanting to go paleo.[2] It was run by Evans himself, Luke Hines ("personal trainer"), Nora Gedgaudas ("expert nutritionist"), Trevor Hendy ("Soul Coach") and Helen Padarin ("Naturopath). A subscription to the site would have set you back $99 AUD for a lifetime subscription or $10 a week. As with most lifetime subscription, it's your lifetime or the site's lifetime, whichever is shorter; in this case the site went kaput in 2020. This was a small price to pay for a lifetime short time of amazing benefits, one of them being the knowledge that you are helping Pete earn a lot of money.

Following the disappearance of The Paleo Way website in 2020, "Evolve Network" popped up later in the year. Besides promoting the paleo diet, it also promotes the ketogenic diet, the carnivore diet.[3] Other dangerous crackpots who are promoted on the site include JP Sears,[4] David Icke,[5] Del Bigtree,[6] Andrew Wakefield,[7] Joseph Mercola,[8] and Sherri Tenpenny.[9]

A self-educated "expert nutritionist", she holds many anti-science beliefs such as that the "use of cod liver oil helps children recover from autism due to the DPT vaccine", and claiming the pertussis toxin interferes with retinoid receptors in the brain. She does not, however, have any university qualifications whatsoever.[10][11]

The book might as well have been titled "Googoo Gaagaa" for all the intelligence that it expresses, but the authors settled on the nonsensical Bubba Yum Yum instead. If you want to wreck your child with an overdose of vitamin A, you probably shouldn't be wasting your time on RationalWiki. Ask Dr. Google and it will tell you anything you want to believe.

Pan Macmillan Australia originally planned to publish the book,[12] but completely dropped Evans as an author after he posted a cartoon on Facebook. The cartoon depicts a caterpillar wearing a MAGA hat and a caterpillar with an ancient Sonnenrad symbol

on its wing. The Sonnenrad has been coopted by both Nazis and neo-Nazis; since Evans is a Trump supporter, you can connect the dots.[13] An earlier edition of the book was self-published by one of the co-authors.[14]

With some help from other nutrition and health "experts" like Charlotte Carr (self described as an actress, voice artist and presenter) and Helen Padarin (a naturopath, nutritionist and medical herbalist), Evans wrote the ultimate paleo diet recipe for babies, which, if followed closely, will prevent autism, obesity, allergies, auto immune diseases, stuttering, premature ejaculation, negative body image, depression, hairy palms, constipation, tooth decay, kidney stones, communism… you know, the lot. For an exhaustive list, consult any paleo expert. A possible explanation for this is that the baby could be dead well before it has time to develop any of the above problems (according to Professor Heather Yeatman — the president of the Public Health Association of Australia.[15]) The book has received similar praise from other leading health and diet experts and institutions. It has a disclaimer saying that relying on the information from the book could lead to negative health consequences.[16] Because, you know, paleo works and is perfectly safe.

Other than his never-ending quest to dispense unqualified dietary advice to the general public, Evans publishes comments on his Facebook page on any topic that tickles his fancy. On one particularly notable occasion in 2016, he claimed that sunscreen contained "poisonous chemicals" and advised his followers not to apply these products.[17] An admirable stance in a country which has one of the highest rates of skin cancer in the world.[18]

After criticism from pretty much every relevant medical organisation in the country, with one describing him as "the kitchen version of Pauline Hanson", he decided that it was a good idea to restate his original claims in an interview with another television channel. Evans posed the unforgettable question: "[Why] do you need a qualification for to talk common sense?"[19]

Evans was fined over $25,000 by the Therapeutic Goods Administration (Australia's regulatory body) for selling and promoting a "BioCharger" device (marked as a "hybrid subtle energy revitalisation platform") that claimed to cure COVID-19. His website claimed that the phallic-shaped item was "proven to restore strength, stamina, coordination and mental clarity" and could cure the disease using light, electromagnetic waves and "frequencies".[20]

This episode prompted yet another response from the president of the Royal Australian College of General Practitioners (RACGP) who advised the public to "ignore his social media content" and that the machine "doesn't do anything but drain your wallet". 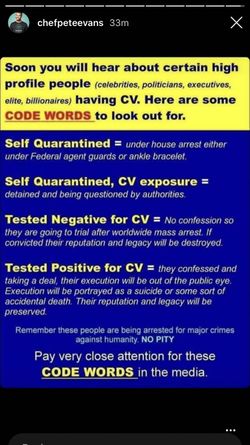 One of the images shared by Evans on his social media profiles, proving once again that fame ≠ sanity.

After losing his job in May 2020,[21] his social media and levels of wingnuttery skyrocketed. He began sharing material from David Icke, which eventually culminated in him posting other conspiracy theories (described as "fringe even among QAnon adherents")[22] and content supporting Donald Trump.[23]