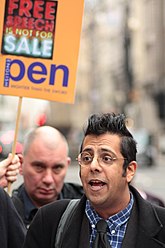 Nick Cohen is a British newspaper columnist who depending on your point of view is an Islamophobic neocon chickenhawk, a member of the international Jewish cabal, a troll or a rare pragmatist among political commentators. He is strongly atheist, but particularly opposes Islamofascism, while being generally pro-Israel and pro-America. Despite his name, he is not Jewish although his father was.[1] He was formerly a left-winger, but seemed to move a bit to the centre, with his Hitchens-like support for bombing the Middle East. He looks like Toby Young after a hideous accident.

He was born in 1961 in Stockport in north-west England and studied PPE at Oxford, which is the traditional qualification for becoming British prime minister. He writes a regular column for the The Observer (now basically The Guardian) and often for New Statesman, and has recently started writing for the right-wing Spectator. His journalism is collected in 2 books, Cruel Britannia: Reports on the Sinister and the Preposterous (1999) and Waiting for the Etonians: Reports from the Sickbed of Liberal England (2009). His original books include Pretty Straight Guys (2003), an attack on New Labour taking its title from a Tony Blair self-description[2]; What's Left?: How the Left lost Its Way (2007) an attack on the British left for failing to be tough enough on Islam; and You Can't Read This Book (2012) about censorship. He was shortlisted for the Orwell Prize for political writing for What's Left?[3]

He was strongly in favour of the US invasion of Iraq. He argued that those who opposed the war were supporters of fascism, while ignoring the fact that many anti-war campaigners were actually concerned about the Iraqi people being exposed both to vast numbers of American bombs and years of subsequent civil war; even Cohen's deep-seated hatred of radical Islam does not convince him that handing Iraq to Shia extremists might have been a bad idea. He is generally strong on moral principle to the extent of not actually caring about the consequences of any action that appears to be right. For the moral absolutist Cohen, it is impossible to do the wrong thing out of good intentions, just as no amount of suffering or abuse excuses any crime.

Even 10 years after the invasion he was still declaring that it was right.[4]

He was involved in the Euston Manifesto, a 2006 document calling on progressive intellectuals to support America in its war on Islam. He was critical of those who put any blame for the 9/11 attacks on the US's support for Middle Eastern tyrants or long history of coups and wars in the region. This suggests that he fails to grasp the difference between what is and what ought to be.

He condemns not only the obvious white apologists of radical Islam like George Galloway, but views almost every element of British society, "broadcasters, … the liberal press, the Civil Service, the Metropolitan Police, the bench of bishops and the judiciary", as being pro-Islam and anti-semitic.[1] He opposes Israeli settlements in the West Bank but supports Israel's right to wage war on Palestinians:[1] it would of course be odd to support the right of the West to bomb Muslims but deny Israelis the same. Cohen has been criticised for showing total indifference to the suffering of the Palestinians.[5]

He is on surer ground with the Bosnian genocide, where he has attacked those on the left who downplayed the seriousness of Serbian war crimes (often out of philoslavism dating back to the Soviet Union), such as Living Marxism magazine (which accused ITN of faking concentration camp footage, lost a big libel case, and went bankrupt, to universal public indifference). He also attacked Noam Chomsky and almost certainly Putin-apologist Seamus Milne.

Cohen is an atheist in the Richard Dawkins/Christopher Hitchens mould. Which is to say, he believes atheists are morally superior and likes to shout about it. As Cohen points out, so-called "militant atheists" in the West have never planted terrorist bombs or attacked anyone. He seems to believe atheists in the UK are a beleaguered minority under constant attack from the left as well as right.[6] This is probably overstating the case a little.

Although Cohen isn't a practicing Jew, or even a Jew at all by traditional methods of calculating lineage, his father was Jewish,[1] and every so often he publishes a newspaper article in which he rediscovers his Jewish roots.[1][7] He is naturally attacked by anti-semites.[8] As his attitude to the Palestinian question shows, he is strongly pro-Israel, or perhaps more accurately anti-Palestinian.

He supports fox-hunting for some reason.[2]