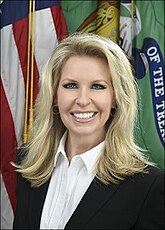 Crowley pretending to be doing something

Monica Crowley (1968–) is an American wingnut radio host who has carved out a niche for herself as the poor man's Ann Coulter. She is a right-wing populist who is repeatedly invited on Fox News as a guest, particularly on The O'Reilly Factor where she has served as a guest host that makes Bill O'Reilly look like a commie in comparison.

Despite being a less successful version of Ann Coulter and Laura Ingraham, Crowley is the best educated of the three, holding a PhD in international relations. She worked for Tricky Dick as a research assistant before moving up the right-wing totem pole. Monica Crowley is also in trouble over plagiarism.[1] Her alleged plagiarism was apparently a qualification for becoming Donald Trump's Assistant Secretary for Public Affairs in the Treasury Department. from 2019-2021.

Crowley, like most ultra-right-wing pundits who are worried they'll become obscure if they don't create some drama, is known for her bizarre outbursts. For instance:

Today she spends most of her day screaming about Barack Obama being a "socialist." The liberal blogosphere got upset with her when she lied that Bush took only two vacations as president.[7]

Being a wingnut, Crowley has declared man made global warming to be a hoax.[8]