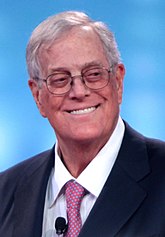 Koch Industries (pronounced "coke," not "cock!" Or "Coach". Or, as the one-time New York City mayor who was once mistaken for being one of them

pronounced it, Kotch.[2]) is a Kansas-based privately-held corporation led by brothers Charles Koch (1935–) and David Koch (1940–2019), heirs to the Fred Koch oil fortune. The Trumps and Mercers are strictly amateur hour compared to what the brothers Koch have been up to. The Mercers only appeared on the scene in the last few years and are trying to establish their name by throwing money around. The Kochs, on the other hand, have been at work for decades building up the machinery the Republicans have been using to fight and win at every level.

Funds donated from the Koch Industries fortune are funneled through several money holes foundations, grouped as the Koch Family Foundations. They subscribe to the idea that anyone opposing crony capitalism is a socialist and that spending money on a bigger megaphone is free speech.[3] As for the Koch brothers’ vaunted philanthropy, most of it seems to be aimed at indoctrination rather than anything particularly helpful.[4][5]

If you're wondering where all that "dark money"[6] goes, don't sweat it; all you need is an invite to one of their top-secret billionaire retreats.[7]

They're creepy and they're kooky[edit]

The Kochs love fascism because it solidifies their position on top of the pile and gives moral cover in doing so,[9] which is why Damien Frederick literally had fascist nannies who monitored his bowel movements[10]—it keeps the massive entitlement complex going.

Fred Koch was a founding member of the John Birch Society. In the upheaval of the seventies, his sons converted to libertarianism and created some of the first libertarian think tanks, most notably the Cato Institute. The Kochs were also major funders of the Libertarian Party from 1976 to 1983, but they withdrew their funding after 1983 to focus on trying to spread libertarian ideas through major party politics and Beltway think tanks like Cato.

Their role within the Libertarian Party was initially welcomed — David Koch was even nominated as the party's 1980 vice-presidential candidate — but later some more reasonable libertarian activists felt that the Kochs were more interested in party machine politics than in libertarian purity, which eventually caused the 1983 split in the party when the Kochs and Cato's Ed Crane left.

It’s all a big misunderstanding, you see, this notion people have that the Koch brothers are a pair of big old culture war reactionaries! The evidence for the Kochs' liberal views—particularly on hot button issues like gay marriage, the War on Drugs, and abortion—is huge, consisting of...well, bylines, off-hand remarks made over forty years ago, and a comment at the 2012 Republican convention. Following the money paints a different picture.[11] You gotta love how the Koch Klan always points to "criminal justice reform" and licensing[12] as if these are their pet issues, and not a distraction to draw attention away from what they really lobby for:

They are Birchers, their agenda is plain as day, yet they put out these puff pieces to obfuscate what their goals are.

It is also true that the Kochs joined with George Soros to donate to the American Civil Liberties Union to help them fight the PATRIOT Act after 9/11. Koch (and Soros) money has also gone to sentencing reform and drug policy reform groups. Both of these tend to be ignored by Koch critics who portray the Koch network as a GOP adjunct, as opposed to what they really are: libertarians. Nonetheless, this hasn't stopped them from dumping large amounts of cash into the political campaigns of many Republicans and conservative Democrats alike who may not share their libertarian views on most things.

More recently, the Kochs have been putting their money into the campaign coffers of politicians of both major parties, mostly incumbents, but giving far more to Republicans than Democrats. While they continue to fund some libertarian think tanks, they now fund wingnuts and have been a source of recurring controversy around their backing of global warming denialists and the Tea Party movement.[29] While one major Teabagger group, FreedomWorks, had its origins in a 2004 split between conservative and libertarian factions in the Koch-founded group "Citizens for a Sound Economy," the Kochs do not have any relation now to FreedomWorks and haven't for years. (FreedomWorks was the conservative side of that split, merged with "Empower America" — a group founded by neocons like William Bennett, Jeane Kirkpatrick, and Jack Kemp — and is now led by Dick Armey). David Koch was responsible for founding Americans for Prosperity, a Teabagger astroturf group. Koch denied involvement but video later leaked of him at Teabagger parties.

Among both hard-core libertarians and progressives wary of the influence of Koch money though, their network of organizations and funding has earned them a nickname, the "Kochtopus," and a watchdog group has called Koch Industries "the Standard Oil of our times."[29] People or organizations supposedly or actually being bankrolled by Koch Industries are called by the endearing nickname Kochsucker, hinting at the deliberate mis-pronunciation mentioned at the top of this article.

Having failed to unseat Barack Obama in the 2012 election, the Koch political machine has trained its crosshairs on a less sophisticated target: Hurricane Sandy victims. Previously, Koch's group gave away free gasoline during the election in a last-second pro-Romney stunt. Flash forward a few months: David Koch, who lives on the Upper East Side, is trying to prevent his fellow New Yorkers from having running water or heat.[30] Despite attempting to dice up Obama's aid package like an onion while keeping it mired in the Senate, the bill eventually passed.[31]

In 2013, the Koch brothers were instrumental in creating the fiscal cliff crisis — but once they realized it had spawned into the equivalent of cocking a shoulder-fired nuke at the New York Stock Exchange they tried to back off.[32] Pro-business, indeed.

Michigan Governor Rick Snyder devoted his terms to "Americans For Prosperity": a Koch-authored, union-killing right-to-work law (even though he promised he wouldn’t),[33] slashing corporate taxes, instituting a budget-crippling flat tax, defunding public education, and the appointment of rule-by-decree ”Emergency Managers” (EM) for major cities. Flint was being governed by an Emergency Financial Manager (EFM) when the water crisis hit.[34] Snyder signed it into law despite referendums telling him not to. Don't worry, Flint, the lead in your drinking water can't be above EPA limits if there is no EPA.[35]

The Koch bros. donor network PAC spent almost a billion dollars over the 2016 election cycle to buy and influence the outcome at all levels of government.[36]

The Kochs didn't get behind Donald Trump and even rejected some of his entreaties. Trump responded by having David Koch physically escorted off of his golf course (though there are differing accounts of the incident).[No, not The Onion][37][38] They probably assumed that his "thin-skinned buffoon" shtick was an act, rather than the entirety of his personality, and that he would actually behave like a normal billionaire when among billionaires now that he's under presidential-level scrutiny.

The Kochtopus is known to include the following organizations and (un)think tanks. The apparatus has grown so tumorous that it resembles a political party in unto itself.[39]

The Kochs also give money to charitable organizations, no doubt in an effort to have their names associated with less damaging enterprises. These include:

The Koch brothers are staunch advocates of libertarianism and meritocracy, quintessential examples of "born on third base and think they hit a triple".

Their father's Bircher bent is particularly amusing when you consider that he made a considerable amount of money setting up the Soviet Union's petroleum refining industry between 1929 and 1932. Granted, he distanced himself from the deal after Joseph Stalin purged many of the engineers Koch's company had trained.

Koch Industries is also one of the biggest corporate welfare queens in the entire US, if not the entire world. Aside from dealing with socialist countries like Venezuela and profiting from the subsidies in the ethanol market, they also had landowners disowned in order to build a pipeline on their property.[45] Despite their libertarian front, the Koch brothers are pretty much what Ayn Rand had in mind when she talked about looters.

Following the full-scale 2022 Russian Invasion of Ukraine, Koch Industries, unlike most US companies in Russia, declined to pull out after broad-scale and unprecedented economic sanctions were imposed on Russia. Dan Caldwell, Koch's vice president for foreign policy, initially suggested that the US would remain neutral in the conflict, comparing the invasion to US neutrality when Revolutionary France declared war on Great Britain in 1793.[46] After the sanctions were imposed, Koch Industries claimed to be complying with them but stated that they opposed broad-based sanctions, nonetheless. Koch Industries' primary business in Russia is the manufacture of industrial glass, employing 600 people at two plants run by their Guardian Industries subsidiary.[47][48] Industrial glass does have military uses.[49] Koch Industries has been called hypocritical by Jane Mayer, author of Dark Money about the political influence of the Kochs,[50] for proclaiming 'liberty' while supporting Putin's tyranny.[51]