Crowder speaking at the 2013 Conservative Political Action Conference (CPAC) in National Harbor, Maryland.
Were you looking for Steven Colbert, an actual comedian?

Steven "Cold Feet" Crowder (1987–) is a professional asshole, commentator and self-described comedian who supports conservative and libertarian views. Crowder is prominent in the conservative establishment: he previously worked for Fox News,[2] wrote for Breitbart.com's Big Hollywood section,[3] and repeatedly appeared at the Conservative Political Action Conference

(CPAC). He regularly posts "comedy" on YouTube[4] and regularly posts "news" on his webshite, LouderWithCrowder.com (LwC for short[5]). Crowder's YouTube channel has over four million subscribers and over 900 million views.[6] 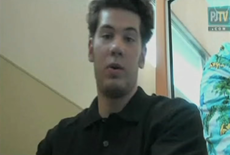 Crowder produced his own comedic shorts until getting picked up by PJ Media in 2009,[2] which caught the eye of Fox News that same year. Crowder worked for Fox News from 2009 to 2013. During that time, he appeared on Hannity[9] and Cavuto.[7] In 2013, after a seven-month period where he was not televised, Crowder criticized Fox in general and Hannity in particular for getting "bulldozed like a child" on a radio interview.[10][11] Despite his public apology,[12] he was shortly fired.[2] After disappearing from Fox, Crowder started doing the speaker circuit rounds, apparently charging about $3,000-$5,000 per visit.[13]

One of Crowder's ideas of wanting to make people laugh is to play extremely racist caricatures of the Chinese as part of "cultural appropriation month".[14]

Despite constantly promoting himself as an independent creator, Steven Crowder's show is actually part of the Glenn Beck and Mark Levin-owned Blaze Media[15], which is funded by billionaire Cary Katz, CRTV's principal investor and College Lending Corp. founder, which markets loans to university students [16].

Some of Crowder's more egregious videos are documented below.

In a video titled "GAY MARRIAGE!! (Featuring Gay Leprechaun)", Crowder begins by whining about being called a homophobe by "the left” for his homophobic views.[18]

The left uses it all the time. If you don't agree with the homosexual bully pulpit 100% of the time, you're homophobic. Forget about any logical objections or counterarguments to things like same-sex marriage. You're simply afraid of the gays.

What are these objections? Well, for one, his feelings would be hurt if we called it "marriage" and he believes it is not homophobic to force gay couples to get an obviously inferior version of water fountain marriage:

[mock gasp] But he must be one of those self-loathing homos. Or maybe, just maybe, he's logical in his thought process in that giving same-sex partnerships the same the same status as marriage may have more serious repercussions than we thought.

He's actually correct that people who oppose gay marriage are homophobic by definition as these people support restrictions of rights for a disadvantaged minority group only for being a disadvantaged minority group. We call that "discrimination" and we have tried "separate-but-equal" facilities, and they always end up unequal and fueled by bigotry. This counterargument may be where Crowder gets the whole "racist" thing from his opponents, by the way.

For another, same-sex marriage means that the government can force churches to gay marry people:

All right, let's assume for a second that you assume marriage a fundamental civil right for everybody. Well, then, what happens if a church decides that they don't wanna marry two dudes? You can't deny people their civil rights, it's the law! So technically, if a church were to follow its own doctrine, they'd risk losing their tax-exempt status. And without a tax-exempt status, a church would cease to exist. So essentially, the government would be infringing upon the church. Isn't that a violation of one of the amendments or something?

Crowder is either being ignorant or being malicious on this claim. Even the Family Research Council says that "there is no significant risk that pastors and churches can be compelled by a court to solemnize, host, or perform a same-sex marriage ceremony".[19]

In a video titled "The REAL GUANTANAMO BAY!!", Crowder asserts that Guantanamo Bay is a well-run beach community (he spends 2 minutes of 14 partaking in beach activities) where prisoners are treated fairly and provided numerous amenities. In contrast, Amnesty International has consistently found human rights violations (such as torture) and unjustified detention of civilians (without proper procedural or legal rights).[20] This video features Crowder's manipulative use of language and imagery on full display. For example, Crowder shifts from discussing the rights provided to detainees, to implicitly blaming "liberals" for 9/11, to flatly asserting that all Gitmo detainees are terrorists, in just 15 seconds:[21]

[W]hen you take into consideration that Gitmo once held more than 779 detainees and there are now only around 221 left, it would seem that more people are let free than actually detained. Which is of course a shame, as many of them, ah, actually returned to killing fellow Americans. Americans, liberals. Remember them? The victims in all of this.

[Crowder as Crowder: ]It's important to remember that these detainees are terrorists, not prisoners. Terrorists, just like one of the 9/11 masterminds, Kaleef [sic] Sheikh Mohammad, who, thanks to Obama, is now enjoying an all-expenses paid trip to New York, as he awaits his American trial.

After Barack Obama suggested that the Federal Assault Weapons Ban

Truth is, most of the guns on this ban list are nothing more than your trusty ol' semi-automatic. And for those sissies who don't know, nearly every handgun nowadays is a semi-automatic. This is just a part of the Obama Administration's multi-pronged approach to take away our 2nd Amendment rights. And they're not the first! Plenty of successful leaders have implemented gun control in the past. Hitler, Stalin, Che Guevara, and now we've got Pelosi and pals!

Of course, [1] Obama never took your guns, [2] Hitler expanded gun rights (for the "right kind" of citizens), although he did strip these rights from Jews and other so-called "undesirables," and [3] Ché Guevara, who was a literal armed revolutionary against a tyrannical government, only briefly held office in the following Castro regime.

In May of 2019, Carlos Maza made a Tweet shedding light on Crowder's homophobic remarks:[23]

Crowder described Maza as the following, with a stereotypical gay voice for some of them:[23]

You're given a free pass as a crappy writer because you're gay.

Sprite is a synonym for fairy, which is a known homophobic slur.[25] Meanwhile, queer can be derogatory depending on context,[26] which is obviously the case here. On June 5, 2019, Chris Dale of YouTube responded with a blog post, "Taking a harder look at harassment", that promised tougher policies regarding harassment and hate speech.[27] These policy updates were met with mixed reception, as many innocent channels saw a drop in ad revenue in what is dubbed the "Vox Adpocalypse".

As for Pete Buttigieg 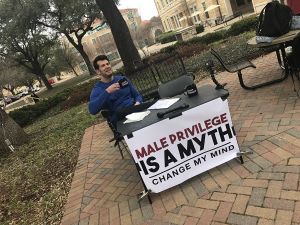 The original image that became a meme.

"Change My Mind" is a YouTube show where Steven Crowder debates with non-credentialed young adults on complex issues. Big surprise: Crowder argues for a wide array of conservative topics.[28]

In June of 2016, Crowder announced the super "edgy" T-shirt "Socialism is for figs":

Remember kids, it's not bigotry if you replace one letter in a slur!

In Crowder's article for Breitbart titled "Sarah Silverman: Fox News Is a Secret Racist Machine!", Crowder asserts that Silverman is not racist for using racist slurs:[32]

How convenient for a lady like Sarah who regularly uses words such as “chink,” “nigger” and “spic” as staples in her act. Don’t worry, though, the only reason Sarah uses such incendiary language is because, “the progressive messages out there today are more refined and sense-of-irony dependent.” Yes, really.

Listen, I don’t think that anybody has the right to prohibit Sarah from using those words and I don’t think that she’s a racist. I think she’s distasteful, unfunny and terribly ugly (both inside and out) with no redeeming qualities whatsoever… But not a racist.

In the end, I guess I’m just hoping that folks don’t lump the off-putting “Hollywood Jews” in with the good, decent people of the Jewish faith. I’ve been seeing a lot of anti-Semitism lately from both the left and the far-right (Alex Jones anybody?), and I find it troubling. So the next time you hear one of the Weinstein brothers or Carl Reiner speak and find yourself disgusted, remember that they would have more in common with Sean Penn than with your local Rabbi.

Crowder has repeatedly lied or misrepresented evidence in his political commentator career, as you may have noticed from the above.

Following this, Crowder challenged Hadfield to a debate. Hadfield refused because no topic or time of day was proposed and therefore a formal debate could not be prepared. Updates as to the debate discussions were brought up in subsequent Hadfield videos.[35][36] Haldfield agreed to participate in a livestream debate scheduled for April 27, but Crowder chickened out at the last minute.[37]

Leading up to 2018 Politicon, Sam Seder challenged Steven Crowder to a debate. Politicon contacted Steven Crowder who in response, stopped responding to their emails. [38] Since then, Sam Seder has posted numerous challenges [39] and Crowder's own followers have asked why he won't debate Seder. Crowder has ignored the challenge but continued to "debate" random college students who aren't schooled on these subjects.

Judd wrote a 2010 essay (not "just tweeted" by 3 years, and not Twitter at all) in which she expressed grief at learning that electronic products are manufactured in countries in conflict. In such countries, women are often sexually assaulted by militia members.[40]

Upon close inspection, it's clear that Steven Crowder used a throw to get the old man to the ground. [41]

In the aftermath of the 2020 U.S. presidential election, Crowder streamed a number of videos in which he falsely claimed that voter fraud occurred in several states in order to "steal" the election from the Republicans.[42][43][44][45][46][47][48] Notably, he neglected to comment after the (Republican-dominated) Supreme Court ruled that voter fraud did not occur.[49] Crowder also failed to mention that the GOP attempted to stop the count on multiple occasions.[50] When said conspiracy theories led to a riot in DC, Crowder declined to comment on his role, instead going on holiday.[51] When he returned from his much-needed hiatus childish attempt to avoid responsibility, he continued peddling the same conspiracy.[52]

Crowder believes that big tech companies are trying to silence him, despite having 5.25 million subscribers and most of his videos being monetized. He even went as far as to call it "the biggest issue of our time",[53] instead of, y'know, climate change or maybe the ongoing pandemic.

In September 2016, Andrew Anglin of The Daily Stormer started a "meme" smear campaign where he used fake Tweets to claim that Crowder is the leader of the alt-right and advocates for another Holocaust,[54][55] seemingly in the hopes of ruining what's left of Crowder's reputation à la Ben Garrison.[56] The "meme" was picked up by David Duke,[57] 4chan's /pol/,[58][59] and The Right Stuff, which released a fake podcast titled "White Power with Crowder".[60] Trolls on Twitter defamed Crowder on the hashtag #CrowderFacts.[61]

In reality, Crowder is passionately pro-Israel and opposes antisemitism,[62][63][64][65] despite him originally having good buddy and occasional substitute host Owen Benjamin being a fucking Holocaust denier and straight-up Neo-Nazi who he only cut ties with after Benjamin told him the Moon landing was a hoax. He also believes Barack Obama is antisemitic,[66] so don't feel too bad about him being slandered in the same manner. Crowder mocked the alt-right when Donald Trump appeared to be on good terms with Benjamin Netanyahu.[67] Alt-right organizer Richard Spencer asserted that "most of the stuff [Crowder] says is just off-the-shelf conservatism that isn’t remotely dangerous or new."[56]