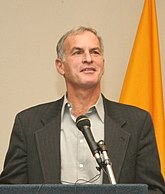 Norman Finkelstein (1953–) is an American political scientist and historian whose work focuses on the history of the Palestinians and Zionism. His work is extremely controversial as it challenges ideas considered conventional in the United States about Israeli policy towards the Palestinians.[1] Finkelstein has written a series of books about Israeli-Palestinian relations with titles that were confrontational and caustic, such as Beyond Chutzpah and The Holocaust Industry. As a result, his work is often quote mined by neo-Nazi and white supremacist groups; Finkelstein's detractors use this to paint him as a self-hating Jew, an anti-Semite, a Holocaust denier, and a supporter of terrorism.[2] Finkelstein has made questionable and controversial statements defending notorious Holocaust denier David Irving[3][4] and has compared the slain Charlie Hebdo cartoonists to Nazi propagandists.[5] Norman Finkelstein is currently teaching at a university in Turkey,[6] following a controversial rejection of his tenure bid at DePaul University, which led to an out-of-court settlement, but he continues to make speeches and offer news commentary.[7] Around the time of his tenure bid at DePaul, Mr. Finkelstein declared his support for Hezbollah at an anti-Israel rally, where he exclaimed: "We are all Hezbollah".[8]

Finkelstein was raised in New York's Coney Island neighborhood by Maryla Husyt Finkelstein and Zacharias Finkelstein, both Polish Jews who survived the Nazi Holocaust. His mother was almost fanatic in her views on pacifism,[9] making an impact on him at a young age. He traveled to the Palestinian Territories and wrote a memoir about the First Intifada after completing his thesis on Zionism and the portrayals of the Israeli-Palestine Conflict. His thesis was based around the deconstruction of a hodge-podged woo history of Israel, From Time Immemorial by Joan Peters, which was declared the best book ever written by the mainstream literary press before Finkelstein made clear it was less than tenable in its basic premise, that the idea of native indigenous Palestinians was a fiction foisted by anti-Semitic Arab terrorists upon the Israelis in 1948.[10]

In 2003, he called Alan Dershowitz a plagiarist on international radio,[11] a move which culminated with the absolute atomization of any career it could be said Finkelstein had. The charge is that the inaccuracies in Dershowitz's book The Case for Israel are practically identical to the inaccuracies in Joan Peters's book and that The Case for Israel contains twenty such examples. Within the year, Dershowitz had sent an inflammatory package of woo through the internets, alleging all sorts of obscenities, including the idea that Finkelstein's mother was a collaborating kapo

in a concentration camp.[12] The fact that then-Harvard Law School Dean and now-Supreme Court Justice Elena Kagan let such a gross breach of academic freedom and slander be posted on the Harvard Law School's web server and web page elevates the deeply disturbing fact to a whole other level.[13][14] DePaul University in Chicago then rejected his tenure bid despite a majority vote in favor. As such, Finkelstein is, in academic terms, relegated to the equivalent of Limbo, un-tenured but not so much disgraced (as is the case with Creationist geologists) as much as disenfranchised at this intersection between academia and politics.

Recently, Finkelstein has condemned BDS because he sees the movement as being opposed to Israel’s right to exist as clearly cited in international law. This opposition to BDS is a(nother) stance Finkelstein shares with his friend and mentor Noam Chomsky. Both view the BDS movement as quasi-religious and impractical, with Finkelstein drawing parallels to his own, youthful, fervent Maoism (from which he became thoroughly disillusioned).[15]

In 2000, his book The Holocaust Industry raised hackles because, well, the title seems pretty obvious. Finkelstein claims that Israeli propaganda and aligned Western Zionist groups, such as AIPAC

, manipulate public opinion of Israeli policy towards the Palestinians by invoking the Holocaust.[16] The book catalogs abuse of the memory of the Holocaust for crude political and financial gain, including an investigation of the Swiss banking industry for alleged Nazi collaboration and the invocation and equation of Israeli political opponents with Nazis, as with the bitter political campaigns between Benjamin Netanyahu and Yitzhak Rabin. He also dedicates a good section to making Elie Wiesel

out to be some sort of charlatan and faux-priest shaman of mystical Holocaust woo.[17]

Finkelstein's claims about Swiss banks being extorted (in other words, the semi-governmental Jewish Agency falsely accused them of stealing Eastern European Jews' money) are not a figment of his imagination. He has been backed up by Raul Hilberg

, one of the world's foremost scholars on the Holocaust, and by Avi Shlaim

, a highly respected, and perhaps revolutionary, scholar on the State of Israel's early history.[18] In fact, the book is one of debunking. Swiss banks are for rich global customers, as well as domestic customers of any class; the Jews of Eastern Europe were very poor. Even if there were a few exceptions to this (there were), how is it possible that Swiss banks have kept over one billion dollars from holocaust survivors and their descendants (the full size of the settlement that the banks paid being $1.25 billion)? Furthermore, there were probably no Swiss Jews who endured the Holocaust[citation needed] (excluding maybe a few dual citizens, if there were any) because the Axis never invaded Switzerland due to Swiss neutrality, so it is unlikely those banks would have gotten away with stealing money from Jews living in Switzerland at that point in time either, except perhaps those who came to Switzerland as refugees and were later placed in internment (not death) camps.[19]

What really irks Finkelstein, and anyone in their right mind, was that the money from the $1.25 billion settlement didn't make it into the hands of Holocaust survivors or their heirs or heirs of those who perished[citation needed], even though that's whose name the case was brought for in the first place.[20]

Finkelstein voiced his support for David Irving in an online discussion with British activists, calling him a "very good historian". Finding insufficient the evidence of Richard J. Evans as the expert witness in Irving's unsuccessful libel action in 2000 against Deborah Lipstadt, who had labeled Irving a Holocaust denier, Finkelstein said Irving had "produced works that are substantive…If you don’t like it, don’t read it. In the case of Irving, he knew a thing or two—or three"[21][22]

On the Charlie Hebdo shootings[edit]

Two weeks after the attack on Charlie Hebdo's offices, Finkelstein compared the magazine to the Nazi tabloid newspaper Der Sturmer and stated the he had no sympathy for the victims:

So two despairing and desperate young men act out their despair and desperation against this political pornography no different than Der Stürmer, who in the midst of all of this death and destruction decide it's somehow noble to degrade, demean, humiliate and insult the people. I'm sorry, maybe it is very politically incorrect. I have no sympathy for [the staff of Charlie Hebdo]. Should they have been killed? Of course not. But of course, Streicher shouldn't have been hung [sic]. I don't hear that from many people.[25]