On the Origin of Species

From RationalWiki
(Redirected from Origin of the Species)
Jump to: navigation, search 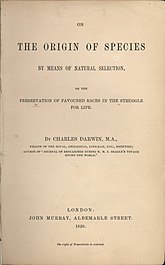 In a nutshell, the book states "There are variations in creatures that are passed on to their descendants. Some of these variations are beneficial, and aid in the species' survival, and some are detrimental. The beneficial variations live on, and the detrimental ones die out." As well as numerous case studies and pieces of evidence - and being shorter than Darwin actually intended - he spends several chapters countering concerns and criticisms offered by the many people Darwin discussed his theories with prior to publication. Origin was later followed by Descent of Man, which applied Darwin's theory to human evolution.

Herbert Spencer coined the term "survival of the fittest" in his Principles of Biology (1864) and this phrase was included in the fifth edition of Darwin's work. However, it has often been misinterpreted as "survival of the strongest" rather than "survival of the most fit for purpose" meaning the most adept at exploiting an ecological niche.

Many fundamentalist religious people are highly offended by the concepts presented in Origin and the science of evolution that has developed since its publication. This is because it is obvious to them that it is easier to make people from dirt than from other living things.