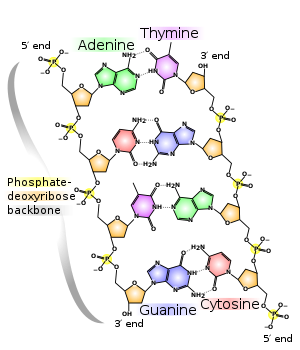 Some of the lines, colors, letters, and numbers that make up you and all of your futile hopes and dreams.

The Astonishing Hypothesis is a book authored by scientist Francis Crick, one of the Nobel Prize-winning co-discoverers of the molecular structure of DNA. It attempts to place the study of human consciousness, a topic traditionally left to the realms of religion and philosophy, firmly within the domain of observable, testable science.

In the book, Crick posits that the mental activities often attributed to the soul are the result of the behavior of brain cells and the atoms, ions, and molecules that they are composed of. Crick's argument is that the outdated conception of a non-material soul must be replaced with an understanding of how consciousness is created through the processes of a very physical brain.

Less astonishing than Crick's hypothesis are the vast numbers of people who would be upset with the notion that humans and all of their associated thoughts, feelings, and experiences are little more than the products of a bunch of atoms bouncing around. However, the book remains a bit too dry and sciencey to have made it firmly into the realm of pop-science, so many of the people who would take issue with its message have likely never heard of it, or would not understand it if they tried to read it.

This books-related article is a stub.
You can help RationalWiki by expanding it.
Retrieved from "https://rationalwiki.org/w/index.php?title=The_Astonishing_Hypothesis&oldid=2383976"
Categories:
Hidden categories: