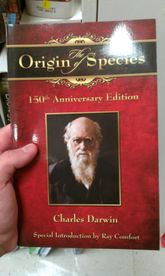 In 2009, Ray Comfort offered an abridged version of Charles Darwin's On the Origin of Species by Means of Natural Selection, or the Preservation of Favoured Races in the Struggle for Life, retitled Origin of Species, and included a fifty-page introduction wherein he tried to explain how Darwin was wrong, atheists are idiots and Christianity is the only thing people need in their lives.

The pre-order webpage stated that the introduction "reveals the dangerous fruit of evolution, Hitler’s undeniable connections to the theory, Darwin's racism, and his disdain for women."[1]

The pre-order page also states that the publisher, part of Comfort's The Way of the Master company, wants "to get one million copies into the hands of students and professors in colleges and universities throughout the U.S." The reason? "Let's see if they try to ban Darwin's Origin of Species [sic]. That would be interesting."

In the PDF offered as a free download on the pre-order page, the opening to the book includes the copyright page. One of the curious lines states, "Unless otherwise indicated, Scripture quotations in this book are from the King James Version of the Bible." Already, students of "prestigious learning institutions" can infer that Ray Comfort's abridged version of Darwin's book will not be anything more than a method to introduce religion into the classroom. With the pre-order's claim that the purpose is to see whether "they try to ban Darwin's Origin of Species [sic]," what Comfort and the publisher fail to point out is almost 1/6 of the book is Ray Comfort's ideas on evolution, creationism, and religion. Coupled with an abridged version of a book widely available unabridged and free online, the real reason why the book will not be used in "prestigious learning institutions" is because it's a pale copy of the original.

The table of contents of Comfort's version versus the original publication of Darwin's book:

There is no reason given in the introduction for why the geological and affinity chapters were removed, except for the combination of the original chapter 10 and the conclusion. Instead, Comfort's special introduction, after giving a brief history of Darwin's life, is an argument for why Christianity is the only true religion people should believe in, and why atheists are dumb.

Any educator who reads such an introduction of a book that removes whole chapters of one of the most important scientific books of all time would probably discard it immediately without a second thought. Ray Comfort has soiled a scientific achievement of the 19th Century just to continue his tirade against non-Christians.

In the second printing of the book, Comfort fixed up the glaring absences in the original print. It now has all fourteen chapters and the original introduction along with Comfort's "special introduction". To save you money, or the time of getting a copy, you can read the whole thing here courtesy of Ray and see why he originally avoided the chapters on the geographical distribution of animals in his first attempt.

On the 4th of November 2009, just weeks before the book handout, the blog Answers in Genesis Busted pointed out similarities in parts of Comfort's introduction to a handout written by University of Tennessee biology lecturer Dr Stan Guffey.[3] The facts speak for themselves.

On the 21st of December 2009, Comfort released a third edition[note 1] of the book with the offending paragraphs removed and properly cited material in its place.[6]

After a rant about belief in a book randomly creating itself, then self-replicating, Comfort annihilates a lightweight description of DNA - from a book for children produced by a drug company! "The letters that make up the words are called DNA bases, and there are only four of them: adenine (A), guanine (G), cytosine (C), and thymine (T). It’s hard to believe that an alphabet with only four letters can make something as wonderful and complex as a person! [footnote:] Kids Genetics, GlaxoSmithKline http://genetics.gsk.com/kids/dna01.htm"[7]

Does it matter if Darwin or his work are discredited?[edit]

Not really. Scientific theories do not rely on the reputation of any individual. It could be established that Darwin was wrong in some places, also a fierce racist with a penchant for eating babies—but this would not discredit our current understanding of evolution. Isaac Newton was a religious man who believed there were secret messages to be discovered in Scriptural passages, along with pursuing alchemy and astrology, but this does not discredit the Theory of Gravity. Creationist claims of Darwin's racism - which was commonplace in the 19th century - are an irrational but convenient method for linking evolution to Social Darwinism.

Evolution does not hinge entirely on Darwin's work any more than astronomy ended with Copernicus. On the Origin of Species was first published in 1859, but evolutionary theory has obviously not stood still during the intervening years. For one, DNA was not known to have existed in Darwin's time, although its discovery added an exceptional amount of evidence for some of Darwin's theories. In fact, the concept of something like DNA—a molecule that could pass on information and mutate between generations—was predicted by the post-Darwin biology of the early 20th century. Its discovery was one of the key triumphs of evolutionary theory, and study of DNA was able to retroactively confirm many observations made prior to its existence.

The progressive gradual change in living species which is now called "evolution" has been observed since the late 1790s, when it was referred to as the "principle of faunal succession". Darwin provided a theory to explain this observation, much as Newton provided a theory of gravity to explain the observed phenomenon of gravity. Even if Darwin's theory were shown to be completely erroneous (as unlikely as that is), there would still be need for a different theory of evolution, because the observed evidence of historical evolution would remain and require an explanation.

Wearing harsh criticism as a badge of honor[edit]

The webpage for the book features this blurb:

No one knows why this is included, the only explanation being that, just maybe, Comfort really is a deep-cover parodist.