PJ Media (formerly Pajamas Media, a.k.a. PJM, PJMedia, Open Source Media, or PJTV) was an unmitigated financial disaster Internet network founded in 2005 by Roger L. Simon and Charles Johnson. Pajamas Media was described variously as an advertising network, an alt-right conservative blogging network, an Internet aggregator, a multimedia hate site and a sinkhole into which investment dollars vanish. In 2009, Simon officially dissolved Pajamas Media, replacing it with another unmitigated financial disaster PJTV, a subscriber-supported video hosting site. It is presently a site of truly gibbering wingnut blogs. Many of the posters who comment on their blog are the so called troll army with the neo-nazi Daily Stormer site, while others are whackjob far-right wingnut conservative evangelicals who seem obsessively paranoid about the LGBT community stealing their bodily fluids.

PJM's precursor was Tulip Advertising, a project conceived by Simon, Johnson and two Ohio businessmen. The original intention was to provide an alternative to BlogAds for conservative and right-libertarian websites (and by right-libertarian, we mean that they're libertarian only in the sense they are for deregulation and tax cuts.). As the project developed, tensions developed between the businessmen and Simon, who was more interested in creating a full-on media empire. By 2005, Tulip Advertising had become Pajamas Media and Simon and Johnson had cut out their business partners entirely.

In November 2005, Simon began collecting venture capital. The first round yielded $3.5 million, with another $3.5 million following shortly thereafter. Exactly what was done with this money is unknown, since it certainly didn't go towards staff or tech support.

When PJM went public, it was known as "Open Source Media." While it was certainly a classier name than Pajamas Media, it was also already taken by these folks.[1] In what turned out to be the first of many embarrassing missteps, Simon was forced to acknowledge the infringement and change the name back.

How this is "conservative" is anyone's guess.

During the first month of operation, Pajamas Media made several attempts to make itself seem more important than it really was.

In November 2005, PJM issued a press release which claimed that the company had a fully-staffed regional office in New York City's Rockefeller Plaza:

Subsequent prying by ever-curious bloggers revealed that the "office" was a glorified call center and the listed phone number didn't work.[3] Professionalism at its finest.

Around the same time, PJM unveiled its end-user licence agreement. Compared to the short disclaimers found on most blogs, the PJM EULA was absurdly restrictive:

Taken literally, the EULA would completely override Fair Use, making it next to impossible to reference, satirize or even promote the site. Furthermore, it was nearly unenforceable. This user demonstrated the foolishness of the EULA by repeatedly, deliberately and publicly violating it before contacting PJM to inform them.[5] In December, PJM relented to the mockery and changed their privacy page to something more reasonable.[6]

Pajamas Media launched with 70 bloggers, culled down from the 300 they originally offered. The initial list was a mix of high-profile bloggers - including Glenn Reynolds, Pamela Geller, Michelle Malkin, John Cole and Jeff Goldstein - and smaller blogs that PJM hoped to cultivate. Some of the initial selections were downright perplexing,[7] and their prospects didn't exactly improve with their later additions.[8]

Early PJM bloggers faced a variety of technical issues, most of them caused by PJM's lack of organization or support. Bloggers had problems getting the poorly-coded ads to work and had no real recourse save contacting higher-tier bloggers for help. By the end of the first month, only 30% of the bloggers were displaying a PJM logo, and just 12% had working ads.[9]

Tech issues and problems with management persisted for most of PJM's run. By 2007, bloggers big[10] and small[11] were abandoning the network. That same year, Charles Johnson sold his stake in PJM, citing differences of opinion. He described the split in a 2009 interview:

Look what it's become. It's pretty much World Net Daily lite. The vision that we had when we started it was that we were gonna bring both left wing and right wing bloggers on board. And I think that that's pretty much been left by the wayside.[12]

In 2008, Roger L. Simon launched PJTV, a video-hosting service featuring top-tier bloggers from the network and whatever marginal political figures he could wrangle.[13] This proved to be the beginning of the end, as Simon rapidly lost interest in his bloggers. The coup de grâce came in January 2009, when Simon announced his intention to phase out PJM. Bloggers in the network received the following message:

As you know, last September Pajamas Media began a new initiative in Internet television called Pajamas TV. When we started with our RNC coverage from Minneapolis, we noted that we would be in a Beta Phase through the first quarter of 2009. In the last few months we have strengthened the PJTV lineup with shows covering Media Bias, Education Bias, Middle East Update, Sharia and Jihad, Powerline Report, Ask Dr. Helen, Hugh News, Poliwood, Conservatism 2.0, Economy and Finance, National Security, and others.

As the end of the first quarter approaches and we near the production phase of Pajamas TV, we will continue to build our emphasis in this area. As a result we have decided to wind down the Pajamas Media Blogger and advertising network effective March 31, 2009. The PJM portal and the XPressBlogs will continue as is.

Since our ad relationship continues for the time being, you should note that in order to be paid for the 1st quarter of 2009, you must leave the current Pajamas ads up until 12:01AM April 1. We will be sending you information in mid-March on removing the ads. As of April 1, 2009, you will be free to arrange syndication or re-sale deals.

We thank you very much for participating during the formative years of Pajamas Media and we look forward to working with you in other ways. One of those is, of course, Pajamas TV. If you have any ideas in that regard, please do not hesitate to contact us.

Our best wishes in the new year and again our deepest gratitude for your participation in Pajamas Media.

Needless to say, the poor saps who get this e-mail were not pleased by it at all.[15] Simon's response was typically respectful:

Actually that part of our business [ad sales] has been losing money from the beginning, so the people getting their quarterly checks from PJM were getting a form of stipend from us in the hopes that advertisers would start to cotton to blogs and we could possibly make a profit. Didn’t happen. No wonder those people are kicking and screaming now that they are off the dole.[16] 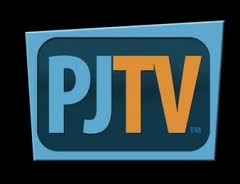 After he was finished backstabbing his old employees, Simon (along with Glenn Reynolds, his new right-hand man) turned to his new project. In April 2009, Simon completely revamped the website to put most of the focus on PJTV, his video service. Blogs were (and still are, as of this writing) available on the site, but only the blogs of the PJTV contributors. The new site had a different business model, as well - rather than relying on advertisements, it would gather revenue through a subscription system.

Getting people to part with money is certainly a lot more difficult than offering free content with ads. One needs high-quality content to make a subscription model work. So what is PJTV offering? As of this writing, their headliners include the following:

It's anyone's guess as to why PJTV hasn't surpassed YouTube.

Yes, Samuel Wurzelbacher briefly served as a PJTV correspondent. Someone at Pajamas Media thought it would be a good idea to send him to Israel for 10 days as a war correspondent.[20] This proved to be his only assignment. Proving that he has at least some standards, Roger L. Simon ended Wurzelbacher's contract immediately after, citing derogatory comments he had made about gays.[21]

While Pajamas Media was a debacle from start to finish, there were some incidents that were more pathetic than most. Cataloged here are some PJM moon shots that hit the ground.

In January 2006, Simon started a campaign to strike against what he called "the new Axis of Evil":

I'm talking about Yahoo, Microsoft and Google, of course, those three Internet mega-corporations who are actively cooperating with totalitarianism in China.

Google is the latest to prostrate itself before the new emperors...

...Okay, instead of boring everyone discussing the corporation's probable rationale ... we're working from within their system, etc., etc., as if they were an automobile or ball-bearing firm and not a media company involved with the dissemination (or in this case non-dissemination) of information and ideas ... I will cut to the proverbial chase. Since this is obviously a manifestation of corporate greed at its most unbridled, not to say cynically exploitive of (even, in a way, racist towards) the people of the most populace (sic) country on Earth, it's time to deal with Google in a manner that could actually affect the retrograde policy of the company. In other word, it's time for...

Everyone who cares about the free-flow of information, about democracy in China, in fact about democracy anywhere, should start selling their Google stock. This should begin most especially with those vast university endowments because academic institutions, of all places, should be most concerned with the censorship of ideas and information. Union pension plans as well should seek to divest as their members should be particularly appalled by the company's restrictive behavior. I could go on, but you certainly get the point. I welcome suggestions for how to mount this campaign in the comments below.

(Full disclosure: I do not own any Google stock, but would, I'm assuming, have the courage of my convictions, if I did.)[22]

Simon's campaign was important enough to have its own section on the site, dubbed "China Syndrome." However, by February all references to the divestment campaign were gone. Whether this was due to a lack of interest or general embarrassment (The stock of all three companies rose steadily through January) is left to the reader to decide; however, the fact that the site was completely scrubbed of all references to "China Syndrome" strongly suggests the latter.[23]

The Ayatollah is dead (again)[edit]

The most high-profile snafu in PJM's checkered history was their reporting on the health of the Ayatollah Khamenei. On January 4th 2007, Michael Ledeen reported that the Ayatollah had died from cancer.[24] At the time, this was considered a make-or-break moment for PJM - if they could scoop the major media outlets on such an important story, it would cement their position as a proper alternative to those outlets. Of course, as a quick trip to Wikipedia will confirm, the Ayatollah was still quite alive in 2007. Ledeen hedged his bets for a few days with unconfirmed allegations, but was ultimately forced to drop the story.

However, Ledeen wasn't quite finished humiliating his benefactors. In October 2009, he claimed again that the Ayatollah was direly ill or dead.[25] Once again, he was wrong. Of course, given Khamenei's age and health, Ledeen is bound to get it right one of these days.

In 2007, PJM ran a straw poll for the Presidential election in the following year. Initially, the poll heavily favored Ron Paul, who led his nearest competition by a 2-to-1 margin. An analysis of the voting revealed that some individuals had been using bots to artificially ramp up the vote totals, and that most of these votes were for Paul. However, Paul continued to lead the poll even after the bad votes were removed.

In February, Ron Paul's name disappeared abruptly from the poll. Officially, this was due to a new policy which excluded candidates who failed to garner at least 1% in the most recent Gallup poll, which didn't even include Paul.[26] Depending on your perspective, this was either an attempt to create a more realistic poll or a cheap tactic to remove a candidate who was not favored by PJM.