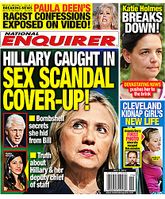 The National Enquirer is an American weekly tabloid, sold mostly at supermarket checkouts and newsstands. It also has an online version and a subscription service, unfortunately.[2]

Its roots were in the New York Evening Enquirer, a regular newspaper founded in 1926 by William Griffin, a protégé of William Randolph Hearst. The Evening Enquirer was essentially a dumping ground for Hearst's less-successful ideas that never took root in his flagship papers, and as a result it had a fairly small circulation. In the 1930s and early 1940s, the paper became a vehicle for Griffin's isolationist sentiments and support for the fascist regimes of Germany and Italy. As a result, he was one of thirty people unsuccessfully charged with sedition in a botched 1944 trial for violating the Alien Registration Act of 1940 (a.k.a. the Smith Act) by editorializing against U.S. involvement in World War II.[3]

By 1952, circulation had fallen to 17,000 copies a week. The struggling paper was bought out that year by Generoso Pope, Jr., the son of the founder of New York's main Italian-language newspaper, Il Progresso. Pope changed the paper's name to the National Enquirer and turned it into a tabloid focused primarily on celebrity gossip and gory crime stories, an idea he claimed to have gotten from watching people's reactions to car accidents. Allegations of Mafia ties have long circulated around Pope's tenure running the Enquirer. The paper never discussed the mob in its pages, and it has been alleged, but never proven, that Mafia boss Frank Costello provided Pope with the money to purchase the Enquirer in exchange for promising to list lottery numbers and refrain from covering them.[4]

The Enquirer dropped the gore in the late 1960s in a successful bid to get carried on supermarket checkout stands, pioneering a new distribution method in the process. To compensate, it added sensationalist stories on psychics, astrology, diet woo, UFOs, and related topics. Pope also moved the paper to the town of Lantana, Florida in 1971, where, from then until his death in 1988, he and the Enquirer sponsored the world's largest Christmas tree each year. In 1979, the Enquirer's parent company launched the Weekly World News for the pseudoscience and woo, and changed the Enquirer's focus to mainly celebrity gossip.

The Enquirer was forced to meet better standards when comedienne Carol Burnett sued them over an article which accused her of flamboyant and drunken behavior.[5][6]

The current publisher of the Enquirer is American Media Inc. (AMI), which also owns several other gossip tabloids like the Sun, the Star, the National Examiner, and the Globe. David J. Pecker, the chairman and CEO of AMI, is a longtime personal friend of Donald Trump, which heavily affected how the Enquirer covered him during his Presidential campaign and later Presidency; see below for more on that.

On April 18th 2019 AMI sold the National Enquirer, alongside The Globe, and the National Examiner to Hudson group for $100 million. Though the deal has currently been delayed.[7]

The National Enquirer is Not A Reliable Source, i.e. it is fake news unless an accidental truth slips in now and then. Keep this in mind when you run across somebody citing the Enquirer as a source, as Mary Stewart Relfe, Stanley Burroughs, and Conservapediaimg have.

The National Enquirer was infamous for its ads over the years, which for some were the main attraction of the paper.[citation needed] These included ads selling "Space Brothers" medallions, which would supposedly cause space aliens to pluck the wearer off the Earth in their UFOs in the event of nuclear war; a mail-order evangelist calling himself "Rev. Dr. John" who would pray powerful prayers for you to be blessed with a new car or bundles of money magically appearing in the mail if you sent him a small donation; vials of magic water from some place where the Virgin Mary had been spotted; and lunatic fringe self-help books like Scott Reed's The Miracle of Psycho-Command Power, in which you could learn to hypnotise lovers and draw them to you with your magic gaze. 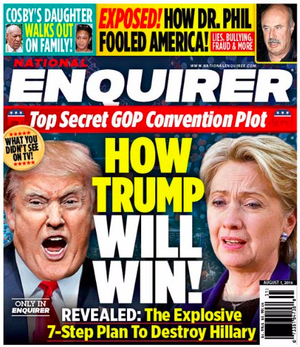 During the 2016 election, the National Enquirer was all over Donald Trump, to the point of endorsement. This was not just a happy accident in finding a one-man bullshit fake news factory in Trump: no, one of the CEOs of the Enquirer's parent company (American Media, Inc.

The Enquirer published false stories about other candidates,[9] from Ted Cruz's dad's connections with Lee Harvey Oswald for the JFK assassination[10] to even Hillary Clinton's connections in Pizzagate. One thing they wouldn't publish, however, was a story from former Playboy model Karen McDougal about her affair with Trump; they paid $150,000 for the story only to bury it and silence her, a practice known as "catch and kill".[11][12]

According to three separate sources, Trump's lawyer/fixer/consigliere, Michael Cohen,[13] was sent advance digital copies of all stories and images related to Trump's 2016 presidential campaign as well as stories related to his political opponents.[14] The pro-Trump dominance of the Enquirer during the election, as well as the catch and kill of the McDougal story, were extremely valuable to the campaign, to the point that it functioned as a weekly campaign mailer — but far more effective — that the campaign did not pay for.[14] The consequence of these shenanigans is that Cohen had his law offices raided by the FBI on April 8, 2018 under a warrant that sought, among other things, all of his records pertaining to AMI, Pecker, and AMI's chief content officer Dylan Howard.[14] Cohen plead guilty of 8 counts of bank fraud, tax fraud, and illegal campaign contributions in August 2018, and has voluntarily agreed offer his cooperation with the FBI.[15]

Perhaps as a result of the fact that the investigation into Trump was starting to look into the Enquirer, the tabloid has notably sharply reduced its Trump coverage in recent months, last putting Trump on the cover in May 2018.[16]

Pecker essentially turned the Enquirer into "a research arm of the Trump campaign", and the documents under which Cohen was criminally charged incicate that Pecker and American Media were "deeply and deliberately involved in the effort to help the Trump campaign", likely violation of campaign finance law.[17] In August 2018, Pecker was granted immunity from prosecution and began cooperating with federal prosecutors.[18]

Its "chief political commentator and correspondent" has been Dick Morris since 2013.[19]

In September 2018, American Media Inc. signed a non-prosecution agreement with the US Southern District of New York in return for cooperating with prosecutors and for admitting to making a $150,000 payment to prevent McDougal's claims from being made public.[20][21] 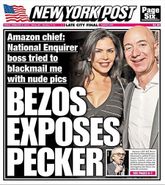 AMI is Saudi Arabia and Mohammad bin Salman's (MBS) lickspittle, and possibly also their illegal lobbyist. In 2018, AMI published 200,000 copies of a thick glossy magazine touting MBS and Saudi Arabia for sale in the US at $13.99 a pop without advertisements.[25] If it turns out to be true that Saudi Arabia either directed or paid for the publication, AMI could be guilty of violating the Foreign Agents Registration Act; suspiciously, Saudi Arabia was reportedly shown an advance copy three weeks before publication.[25][26]