This page discusses the bilateral relations between the United States and a number of countries under the Trump administration.

A tourism slump due to Trump's immigration policies?[edit]

The Guardian reported in February 2017 that the immigration policies of the Trump administration had caused a slump for the American tourism industry.[1] However, there seemed to be no real long-term effect, even in 2017, judging from the passenger volumes of America's largest international airports. Of the world's 20 busiest by passenger traffic, five are American: Hartsfield-Jackson (Atlanta), Los Angeles, O'Hare (Chicago), Dallas-Forth Worth, and Denver. All of them except Atlanta welcomed more people than they did in 2016.[2] In fact, the Airports Council International (ACI) noted a net increase in airport activity of all kinds globally, especially in major markets such as the United States.[3]

Trump has long called for an end to U.S. involvement in Afghanistan, home to America's longest war. In 2018, the U.S. started negotiating a peace treaty with the Taliban, which it toppled as the Afghan government in 2001. However, the situation on the ground rapidly deteriorated, with the Taliban expanding the areas under its control. By early 2019, the Taliban controlled 70% of the country.[5]

While previous generations of wireless internet offer the ability to send texts, static images, voice, and video through the Internet, the fifth generation, or 5G, is one ten to twenty times faster. Such rates of data transmission allow for high-quality video streaming, driverless cars, automated ports, remotely-controlled industrial robots, among other things.[6]

President Trump made this announcement as he was considering banning Chinese telecommunications giant Huawei from the U.S. market. His administration has already warned U.S. allies against adopting Huawei's 5G technology out of security concerns, arguing that intelligence sharing with an ally that uses 5G equipment from Huawei could be jeopardized. Since March 2018, the FCC has considered barring the use of federal funds to purchase equipment from companies that could pose a threat to national security.[7] Under Chinese law, companies must "support, cooperate with and collaborate in national intelligence work."[8] Australia and New Zealand decided to bar Huawei from their 5G networks,[9] as did Japan and Taiwan.[10] Meanwhile, Huawei faces skepticism and scrutiny in various European countries. In particular, France's top telecommunications firm, Orange, said it will not use Huawei's 5G equipment.[11] Although they have been careful not to point fingers at Huawei or China, European lawmakers are introducing new regulations to safeguard the security of data networks.[12] German Interior Minister Horst Seehofer said that U.S. officials had been very impressed with the new security measures put in place. Germany declined to ban Huawei. German officials are convinced that the intelligence ties between Germany and the U.S. will not be in danger as the two countries benefit from each other's assets.[13]

In general, U.S.-led resistance against the surge of Huawei in the 5G market has had limited success in Southeast Asia, where economics is more important than geopolitics (or national security). Singapore, Malaysia , Indonesia, the Philippines, and Thailand have all signed up for trials of Huawei equipment, though they are proceeding with caution.[10] Various countries around the world are racing to implement 5G networks. South Korea and the United States began rolling out their services in early April 2019.[8]

See the main article on this topic: Drone

President Trump ordered his team to make it easier to launch drone strikes, and has since given more authority to the CIA to conduct drone strikes. This is in keeping with his campaign promise that "we have to take out their families," because he is removing all the Obama era guidelines that reduce civilian causalities, while also increasing the CIA's paramilitary capabilities.[14][15][16]

In May 2018, Trump withdrew the U.S. from the Iran nuclear deal. However, U.S. intelligence reports in 2019 confirm that Iran is complying with the deal, thereby posing less of a threat. Trump initially rebuffed the report, but later walked back his comments.[23] Despite imposing severe sanctions on Iran that could cripple her economy if she refuses to change her behavior, Trump made it clear he does not want the situation to escalate into armed conflict. He is wary of U.S. military involvement in the Middle East. National Security Adviser John Bolton and Secretary of State Mike Pompeo sounded the alarm after U.S. intelligence reports showed Iran had equipped her surface combatants with missiles that could strike U.S. and allied targets. Iran's supreme leader, Ayatollah Ali Khamenei, confirmed that his side did not want war either.[24]

In October 2020, Trump imposed new sanctions on Iran’s financial sector, which are so stringent that it would effectively blacklist the entire Iranian financial industry, which could impact food and medicine imports. These are even more extreme than the sanctions against Iraq in the 1990s, which led to hundreds of thousands dying of starvation.[25] 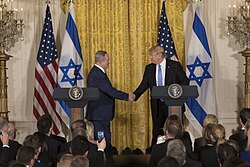 He changed decades of American policy by announcing he will move the US embassy from Tel Aviv to Jerusalem, thereby recognizing Jerusalem as the capitol of a single Israeli state. This immediately provoked armed conflict between Hamas in Gaza and Likud in Israel, causing dozens of deaths within the first day.[26][27][28][29] Violence erupted on the streets of Beirut right in front of the US embassy shortly thereafter.[30]

Trump formally opened the Jerusalem embassy on May 14, 2018, and Palestinians who were either protesting the embassy or commemorating the 70 year anniversary of the Nakba were shot and killed by Israeli border soldiers. About 55 were killed and over 2000 were injured.[31] As if to rub salt on the wound, Trump sent two anti-Semitic evangelical pastors to open the embassy at Jerusalem.[32]

Trump has promised heavy tariffs on imports from Mexico to pay for the Great Wall of America that Mexico does not want. If the wall is built it may damage the economies of the United States and Mexico and American consumers will pay for the wall.[citation needed] Contrary to Trump's oft repeated campaign statements that Mexico will pay for the wall, Mexico has no intention of paying for it and US taxpayers would be paying for it. Vicente Fox, the former President of Mexico said that his country will not pay for it.[33] 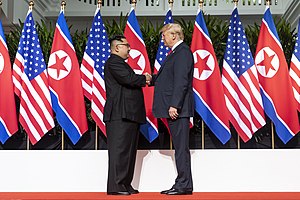 In a historic meeting, Donald Trump met with North Korean leader Kim Jong-un in Singapore in June 2018 for talks on denuclearizing the Korean Peninsula and building "a stable and lasting peace." This was quite remarkable given that the two previously traded harsh words.[35] However, little progress was made and the two sides agreed for a second summit. In the meantime, North Korea has improved its relations with neighboring China and South Korea[36] and has returned the remains of 55 U.S. troops killed in the Korean War, for which Trump thanked Kim.[37] In the wake of the historic summit, North Korean propaganda has taken a more conciliatory turn towards the U.S. and her regional allies. Anti-American posters are all but gone. Posters now promote peace scientific achievements, economic growth, and inter-Korean cooperation.[38]

Despite Trump's optimism, the U.S. intelligence community warned that North Korea is unlikely to halt its nuclear weapons program.[23]

In his 2019 State of the Union address, Trump announced that his second meeting with his North Korean counterpart will take place in Vietnam on the last days of February.[4] Vietnam and the United States are former foes who have improved ties in recent years and is seen as a model of political and economic reform for North Korea, with whom Vietnam maintains good relations. These are the reasons why the country chose to host the summit. Trump specified the location to be the capital city, Hanoi.[39] The meeting was cut short without any progress.

In mid-April, 2018, naval and air forces from the U.S., the U.K., and France conducted air and missile attacks against targets in Syria believed to be part of the Assad regime's chemical weapons program, after an alleged chemical attack by government forces on rebels. All targets were reportedly destroyed by precision-guided munitions.[40] In early 2019, Trump declared that ISIS had been crushed and ordered U.S. troops to withdraw completely from Syria.[41] In October, Trump announced that all US troops working with the Kurds would be withdrawing - in the process, essentially giving Turkey the green light to mount an invasion of the region.

It cannot be overstated what a remarkably stupid decision this is. The Kurds were one of the few groups in the Middle East which didn't want to kill Americans, and by withdrawing US soldiers which had served as a detriment to a Turkish offensive, Trump has left them to the dogs. ISIS prisoners have escaped, the Kurds are in danger of being slaughtered, Russia is now moving into Syria to support them, and the Kurds are allying with Assad - in short, there were absolutely no gains to be made for the US by withdrawing protection from the Kurds and so much to lose. Many Trump supporters condemned the move. There is currently speculation Trump was motivated by business interests he has in Turkey.