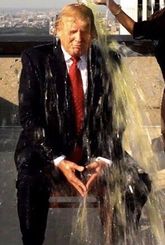 Pissgate (or Watersportsgate) refers to claims that Donald Trump hired prostitutes to "perform a Golden Showers urination show" on a bed in the Moscow Ritz Carlton Hotel, where Barack and Michelle Obama once slept during an official trip to Russia. The claims arise from a 35-page intelligence dossier produced by ex-British Intelligence officer Christopher Steele alleging that Russia was actively engaged in collecting compromising information on Trump during his numerous trips to Russia, and that Russia was "regularly exchanging information with Trump's campaign team through indirect channels".[1]

Only one paragraph of the entire 35-page Steele dossier mentions the alleged "Golden Showers" incident for which Pissgate was named. The bulk of it, compiled by respected former British MI6 agent Christopher Steele,

describes ties between Trump, his advisors, and Russia, along with various Russian efforts to exploit these. Steele was contracted to build a file on Trump's ties to Russia as part of an opposition research effort undertaken for a bipartisan group of anti-Trump Republicans and Democrats.[2]

The dossier alleges that Russia had long been gathering blackmailable material (or kompromat) on Trump that could be used to later manipulate him, such as recordings of his "sexual perversions". It also alleges that the Kremlin and the Trump campaign colluded to hack DNC emails in order to damage Hillary Clinton's chances for winning the 2016 election, supposedly motivated by Vladimir Putin's "fear and hatred" of Clinton.[2]

For those who can get past the "Golden Showers" paragraph, the dossier contains a treasure trove of disturbing allegations, such as:[1]

In January 2017, CNN reported that both Trump and Obama had been given a classified debriefing containing a summary of the intelligence dossier's unverified allegations regarding Trump's involvement with the Russian government. Supposedly, the dossier itself had been privately circulating among Washington politicians and reporters for months. Perhaps emboldened by CNN's reference to it, BuzzFeed News decided to post the full-length version of the dossier on its website, which revealed the salacious "Golden Showers" detail to the public for the first time.[3][4]

Instantly, the idea of Trump watching prostitutes pee on a bed was all anybody could talk (or think) about. 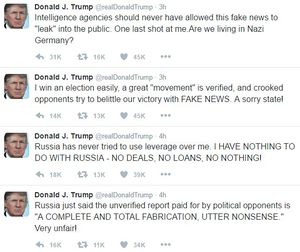 Needless to say, Trump was pissed.

Predictably, an /r/PissGate subreddit was launched on Reddit, and hashtags #PissGate and #PEEOTUS trended on Twitter. Eager to promote an edgelordy image to the public, the denizens of 4chan began claiming credit for "breaking" the Pissgate story and started posting a bunch of obviously improvised "facts". Considering their involvement in a previous troll circlejerk, it's safe to assume anything 4chan has to say about anything is bullshit.[5]

Trump boosters such as the Washington Examiner were quick to slap BuzzFeed as fake news, a message soon picked up by the Tweeter-in-Chief, who complained of "FAKE NEWS - A TOTAL POLITICAL WITCH HUNT!"[6][7][8] Most of the mainstream press merrily raked BuzzFeed over the coals for publishing inflammatory allegations without a shred of evidence to back them up, despite BuzzFeed's disclaimer that the dossier was "not just unconfirmed: It includes some clear errors".[9]

Russian tech billionaire Aleksej Gubarev, accused in the Steele dossier of hacking on behalf of the FSB/KGB, sued Steele and Buzzfeed, ostensibly for public defamation. Steele responded, saying that information about Gubarev was never meant to be publicized, and came from "unsolicited intelligence" and "raw intelligence" that "needed to be analyzed and further investigated/verified".[10]

Vladimir Putin called the dossier "fake" and told reporters that it was difficult for him to imagine that Trump, a man so experienced with beautiful women, ran to a hotel to meet with Russian prostitutes, "even though they are undoubtedly the best in the world". Putin argued the situation was a reflection of the degrading quality of the American political realm,[11] which is fairly accurate, regardless of Pissgate being real or not.

Most major networks did not allow anyone to repeat the bed pissing allegation because it wasn't verified. However, Sean Hannity repeatedly reminded his audience of the substance of the allegations, so other late night comedy shows just replayed Hannity stating it. Stephen Colbert traveled to Moscow to film an episode in the hotel room and to conduct "man-on-the-street" interviews to see if Russians were aware of the rumors.

The topic of Trump, prostitutes, and urine never really seemed to go away, thanks in part to the president himself. In April 2018, former FBI Director James Comey published a book in which he recounted private conversations with Trump, whom he described as being "obsessed" with the alleged pee tape. "There's no way I would let people pee on each other around me," Trump supposedly told Comey, who appeared less than convinced:[12]

Which tape? I got all kinds of tapes.
See the main article on this topic: Trump-Russia connection

In February 2017, multiple current and former US law enforcement and intelligence officials confirmed that some of the conversations between individuals described in the dossier did actually take place on dates and times detailed in the dossier,[15] and "people who discounted it initially have begun to take it more seriously".[16]

A number of claims contained in the dossier (e.g. that Russia agreed to hack DNC emails and funnel them to Wikileaks in exchange for a pro-Russia posture by Trump) have been increasingly corroborated, and numerous other examples of ties between the Trump staff and the Russian government appear to support the dossier's conclusion that Trump is figuratively in Russia's pocket.[17][18]

In July 2017, a series of emails were released that documented Donald Trump Jr.'s contact with a Russian attorney in hopes of receiving derogatory information on Hillary Clinton that he understood was "part of Russia and its government's support for Mr. Trump". The emails indicated that the Trump campaign was willing and eager to receive assistance from the Russian government, giving some credibility to allegations contained in the Steele dossier that Putin's regime was actively funneling derogatory Clinton material to Trump's inner circle.[19]

Conspiracy theorists seized upon information first reported by the Washington Post that the dossier was originally funded by Trump's GOP opponents and then, when he won the nomination, by...gasp...Democrats![20][21]

The Hillary Clinton campaign and the Democratic National Committee helped fund research that resulted in a now-famous dossier containing allegations about President Trump's connections to Russia and possible coordination between his campaign and the Kremlin, people familiar with the matter said.

Conspiracy theorists believe that Democratic funding of the dossier is proof that the DNC and the Clinton campaign colluded with Russia. Their argument is that Steele's dossier was based on Kremlin sources. Since Steele had to interact with Russian sources in order to produce the dossier, this is "proof" of collusion with Russia, and the Democrats funding the dossier makes them guilty of collusion by association.[22]

There's one major flaw in this conspiracy theory. In order to believe it, you'd have to believe that that Russia had an interest in electing Hillary Clinton as president over Donald Trump. After all, if Steele was getting his dirt from the Kremlin, it would imply that the Kremlin disliked Trump and didn't want him to be president. This is, of course, a highly dubious assumption. If the Russians wanted to elect Hillary, they would have trumpeted the dossier's claims in an attempt to smear Trump and help elect Clinton – not vigorously deny the charges and call them a smear on Trump.[11] In fact, the Russians engaged in activities that indicated that they preferred Trump over Clinton. Johnathan Chait wrote that the Russians wouldn't have publicized the DNC email leaks if they wanted to help elect Clinton over Trump.[23] Politico reported that the release of Podesta emails complicated Trump's narrative that there was Democratic collusion.[24] The Russians spent the 2016 election attempting to influence the election in favor of Trump, not Clinton. Since belief in Democratic collusion in Russia necessarily requires the demonstrably false belief that Russia wanted a Democratic president, this conspiracy theory is easily dismissed.