From RationalWiki
(Redirected from Prions)
Jump to: navigation, search 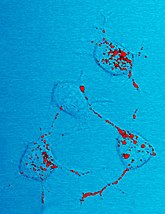 Four nerve cells in a mouse; the red parts show prion proteins, which are transmitted along neurites (projections between cells).

A prion is a type of pathogen and the name given to the first protein found that exhibits prion-like infectious properties. Prions are a misfolded form of a host expressed protein.[1] The misfolding allows one protein to cause the misfolding of another (the first acting as a template for the second), which will itself cause the misfolding of other proteins in a chain reaction. Prions are mostly known for being the transmission mechanisms for diseases that cause neurological tissues to break down in animals and humans which are collectively known as transmittable spongiform encephalopathies (TSEs).[1] While prions usually cause brain disease, but it has been shown that prions can ocassionally affect other areas as well (including peripheral nerves[2][3]) as well as cause other diseases, such as Alzheimer's.[4]

There are several known human diseases caused by prions:[5]

There is some evidence that prions play a role in other neurodegenerative diseases, including Alzheimer's disease and Parkinson's disease.[6]

There are also several animal diseases caused by prions:[5]

These diseases are known collectively as transmissible spongiform encephalopathies (SE) and they have varying symptoms. Proteins, when exposed to enzymes that break them down (proteases), are chopped up into small bits (technically, the protein is protease-sensitive.). However, when the normal prion protein (PrPC) folding occurs, the proteins may misfold into the pathogenic/infectious form (PrPSc), after which it then causes disease.[7] This has two effects, one is that the protein is highly protease-resistant, and are also resistant to other forms of destruction.[8] Once a misfolded prion protein (PrPSc) comes into contact with normal protein prion protein (PrPC) it converts the PrPC into PrPSc (a domino effect). Prion infections are currently untreatable, although some people seem to have evolved a degree of resistance (most notably the Fore people

due to consistent encounters with Kuru over several generations, some of whom went 45 years after initial contact before becoming symptomatic); a person or animal infected will die and the proteins remain infectious.[9]

Strangely enough, while synthetic mouse prions have been found to affect the brains of mice, synthetic human prions do not seem to be able to cause disease in vitro unless they are in the presence of certain co-factors such as specific forms of RNA, suggesting that the current picture of prion pathogenesis is incomplete.[10]

Several prion-like proteins have also been identified in yeasts. However, these fungal prions appear to be benign or even positive in their effects, allowing them to function as a form of epigenetic inheritable that increases variation in phenotypes among a population that would otherwise be genetically homogenous.[11]

There are three types of prion disease — infectious, sporadic and genetic.

Signs and symptoms of prion disease[edit]

Prion diseases are always degenerative, and eventually lead to death. Signs and symptoms vary among each disease but are very similar. This section will give lists of the symptoms of a few of these diseases.

Many medical professionals have never even heard of prions because they are so rare.

As with any deadly disease, there are quacks who promote woo. Earth Clinic, which is a natural health website, claims that apple cider vinegar and caprylic acid can treat the symptoms.[12] However, if someone ingests too much caprylic acid it may cause pain in the gastrointestinal tract. Caprylic acid is fairly safe if taken in small amounts; outside that it does nothing to help with symptoms.