From RationalWiki
(Redirected from Psychic powers)
Jump to navigation Jump to search
If you happen to be dycsexil, you might be looking for physics instead.

A psychic is a person purporting to have some sort of supernatural or paranormal ability to receive or interpret information in a way that normal people cannot and that empirical evidence cannot detect. "Psychic" is a fairly catch-all term with regard to the specific abilities claimed, but generally it's taken to mean "communication through the mind".

Psychics come in many flavors, claiming a range of abilities such as:

No psychic ability has ever been experimentally demonstrated to work reliably in test conditions. If it had, James Randi would be short quite a bit of cash by now. There is zero non-anecdotal evidence that there is anything going on here other than stage magic and conjuring tricks mixed with basic psychology.

There are numerous naturalistic explanations for the claims psychics make. In fact, one of the more successful individuals who demonstrates "psychic" abilities is Derren Brown, who openly admits (indeed, this is the point of his show) that there is no magic and no paranormal activity going on and that he's just using psychology, suggestion and other trickery to create the effects - people who admit to this are known as mentalists. Many psychics rely on the same basic techniques such as cold reading, warm reading, and hot reading to make their victims think the psychic is actually capable of doing something useful. These tricks use well understood naturalistic psychological manipulations to impress a false sense of a "psychic reading" into the victim.

"Warm", or "hot", reading techniques involve getting the answers straight from the audience's mouths. For example, a researcher will quiz the audience about "who they want to contact" and then passes the info to the psychic secretly.[3] This can be especially deceitful when the psychic then reads off this information and passes it off as coming from their "ability" by claiming that the warm-reading interview beforehand never happened. Sometimes psychics use this to turn around a failing show - selective reporting then ensures that people only remember this miraculous answer, rather than the dozens of incorrect guesses. Peter Popoff is just one of several famous frauds that used warm reading techniques to amass unseemly wealth through the exploitation of the unfortunate gullible. 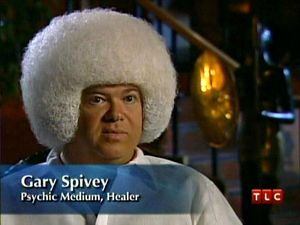 Since giving readings is not always profitable enough for the more greedy popular ones, some psychics and other wizards have created programs or teaching courses to sell to people who believe they can garner magical powers as well. Of course nothing really happens after finishing the program, but the student will be Officially Certified and they'll likely try to pretend to be a real psychic for a while to justify the enormous amount of money they wasted on the program.

For some reason, they never seem to be able to predict lottery numbers at a better rate than pure chance.

How to expose a psychic in 5 seconds[edit]