Public Advocate of the U.S.

Public Advocate of the U.S., or just Public Advocate, is an American slush fund organization run by Eugene Delgaudio,[2] part-time representative on the Board of Supervisors of Loudon County, Virginia, and full-time homophobe.

As far as anti-gay wingnut sites go, it's not the most batshit insane, but its frequent usage of the phrase "radical homosexual lobby", the most obviously loaded surveys that ever existed,[3] paranoid tales of homofascists stalking his family,[4] and incessant e-begging/fundraising gimmicks[5] all earn him a pretty high ranking on the relative craziness scoreboard. 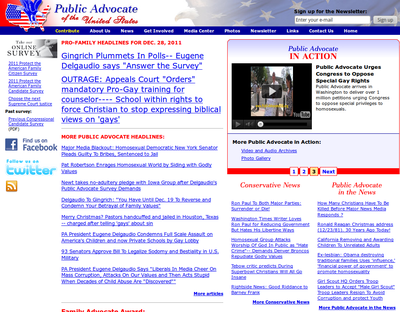 About once a week (or more frequently, in some instances) ol' Eugene sends out an e-mail to all who signed up for his newsletter, probably unwittingly. In these he likes to do two things: rant about how the perverse radical homosexual lobby is destroying America, and ask for your generous donations -- about twenty times. Often these are accompanied by delusions of paranoia and grandeur, simultaneously ("...before every radical homosexual activist holds a copy of Public Advocate’s financial records in his conniving hands").

PZ Myers, of Pharyngula, has blogged about them twice: once about their "survey,"[9] which is so biased it's not even funny hilarious, and another time about one of their newsletters.[10]

Ed Brayton has also highlighted Delgaudio's constant appeals for money, and where it goes,[11] as well as the Jack Chick-esque content of his newsletters.