Radium (Ra) is an extremely radioactive metal (much more radioactive than an equal mass of uranium), producing all three kinds of ionizing radiation — alpha-, beta- and gamma-. It occurs naturally, as it is a result of the decay of uranium, and in turn decays into radon (Rn) — "a radioactive, colorless, odorless, tasteless noble gas" according to Wikipedia. Sounds fun, unless your house is built on granite bedrock (which contains uranium). Radium and radon have no stable isotopes, and as with all types of ionizing radiation, they can cause cancer to people who are exposed to them, and if that's not bad enough, radon decays into other toxic elements like polonium and lead that then get stuck in your lungs. Radium-224, radium-226, radium-228 and radon-222 are known to be human carcinogens.[1]

Radium was first isolated in the beginning of the 20th century. About the same time it was found that the waters of several popular mineral springs were radioactive, as they contained "radium emanation" - a.k.a radon. The medical science of the time added two and two, forgot to subtract one thousand, and got four:

As a result, an industry of radium- and radon-related products sprang up. People were not content with bathing in and drinking natural radioactive water at the springs and decided that they need to do it at home (radon decays relatively quickly so radon water can't be transported over long distances). It got to the point where everything was advertising itself as containing radium, even if it didn't have any radium at all — some products used a cheaper substitute like thorium, while others just used the "radium" name as a gimmick.[2]

Despite the "radiophobia" that gripped the West (and the East) after the bombing of Hiroshima and Nagasaki and the MAD days of the Cold War, radioactive "health" products, including radium and radon products, are still manufactured and marketed. If you want to bathe in radon-enriched water, some Japanese guys will sell you the Radon Egg — a ceramic container in which thorium tablets will release radon in your tub before the bath.[4]

One of the reasons the FDA was created was to crack down on radioactive quackery.

Radium was used in the first successful radiotherapy treatment for cancer, originated by Marie Curie (whose death can be unmistakably attributed to radiation exposure itself). Thin metal cylinders filled with milligram amounts of radium salts, called "radium needles", were surgically implanted into cancer tissue and then removed after some time. This technique, called brachytherapy, is a legitimate medical procedure that is still used today. The radium salts, however, have largely been replaced by cheaper alternative isotopes, produced in nuclear reactors. It was at one time used to reduce the size of an overactive thyroid. 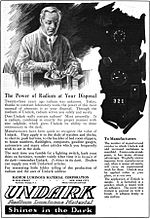 One of the most notable uses of radium was in luminous paint used on watch hands, instrument dials, control panels and other equipment that had to remain usable in the dark without electricity. Once World War I came along, demand for the glow-in-the-dark watches increased as soldiers needed to be able to see the time in the dark to coordinate night attacks. Three companies, United States Radium, the Radium Dial Corporation, and the Waterbury Clock Company would dominate the production of radium paint, which was created by mixing radium salts with zinc sulfide. Young girls, most of them teenagers but some as young as 11, were chosen to paint the dials because of their smaller hands, and most of them came from working class or immigrant backgrounds.[7]

The workers were told to lick the paintbrushes so that they would have a fine tip. Soon, many of the workers started dying, and a particularly common affliction was one where their jaws painfully disintegrated, which was called "radium necrosis" by the New York Times in 1925, while mouth sores and tumors were also common among the workers.[8] By this point, the executives knew radium was dangerous and even took efforts to protect themselves such as wearing lead aprons and using tongs to handle radium, but the female watch painters received no such protection.[9] This led to a coverup on the employers' end, with them trying to fund studies that would show that radium was safe;[10] when U.S. Radium commissioned a report in 1924 that revealed that radium was the cause of the women's health problems, they rewrote the report to say "every girl is in perfect condition" and filed their falsified report, still having the name of the original researcher, to the New Jersey Department of Labor.[7] The workers were also targeted by a smear campaign on the part of the manufacturers by saying they were actually dying from syphilis, an STD.[11]

Eventually, Grace Fryer, Edna Hussman, Katherine Schaub, Quinta McDonald, and Albina Larice, five women who were dying as a result of their exposure to radium, sued U.S. Radium, and despite the manufacturers' efforts to delay the case it was heard in 1928, at which point two of the women were bedridden and the others weren't able to raise their arms to take oath as a result of their conditions. Ultimately, the lawsuits exposed the manufacturers as knowing that radium was poisoning their workers despite them printing ads saying that it was safe, and U.S. Radium was ordered to pay $10,000 to each woman (about $170,000 in today's money) as well as $600 for each year they continued to live with radium sickness. The case resulted in radium losing much of its popularity as well as reforms to some of New Jersey's labor laws (that the radium workers were largely unable to take advantage of, as the statute of limitations had passed).[7]

Ultimately, luminous paint dials started to use promethium and later tritium (an isotope of hydrogen with two neutrons) instead of radium due to the latter's long half-life, cost and gamma emissions. Promethium and tritium emit only low-energy beta particles and are therefore only dangerous when ingested. However, what really changed the game were LEDs, which became commercially available in 1962 and made the original need for glow-in-the-dark paint completely irrelevant.[12] Today, almost no household glow-in-the-dark wristwatch dials or toys are made with radioactive substances at all; instead they rely on slow phosphorescence, the absorption and slow re-emission of ordinary light, which is why they typically only glow for a few minutes after you turn the lights out.[13]