For discussion of the election process, see RationalWiki talk:Moderator elections.

Cretinous Incompetent (CI, if I may) is offering jelly babies, might be hard to resist. Maybe I should have done something with Jammie Dodgers... Blue Talk 04:22, 8 September 2011 (UTC)

Here nominees may make their case as to why they should be elected.

I am fair, uncompromising and a trusted user. Although I am no stranger to controversy I also posses integrity - so much so in fact that I resigned as a moderator when I was embroiled in a trolling scandal. I am honest, wise and kind. Vote Ace for an Ace Future paid for by the Ace McWicked for moderator moderation fund - approved by the commerce commission of New Zealand, the office of the prime minister, Crazy Horse Steakhouse and that liquor store I always visit. Aceace 21:54, 5 September 2011 (UTC)

In my stump speech for the previous election, I outlined the qualities I thought we would need in a moderator.

Although the office of moderator has already shown itself to be much more effective than the system it replaced, I think that developments since the election have emphasized the importance of the points I made in that outline, especially the second.

It has been made clear that some moderators take their duties more seriously than others, and have often been the ones to take the initiative in controversies. P-Foster (before his resignation), AD, and Blue have been the most visible and effective in this respect.

One of my fellow candidates has promised to be a "hands-off" moderator. Another has tried for the "hands-on" approach, but ended up taking that too literally for some people's taste. I, on the other hand, think that we need more of the proactive moderators. If elected, I would likely be such a moderator; I doubt I could sit idly by and watch a spate of HCM spill out without attempting an intervention.

So, if you would like a moderator who would be inclined toward closing the barn door before the horses bolt, vote for me.

My moderation style was described as "visible and effective" by ListenerX. That sums it up. I won't be overbearing, as some have accused; I'll strive to use as little authority as possible to fulfill moderator prerogatives. That being said, I won't sit idly by as HCM explodes around me, nor turn a blind eye to obvious violations of the standards. That's all I have to say, really; check this page's archive for my previous, lengthier speech from the last election. Cheers. Blue Talk 04:15, 7 September 2011 (UTC)

I know that I am unlikely to win. I am relatively new, probably hard to understand most of the time and a not very small number of people don't seem to like me. That said, I want to change RationalWiki while staying the same wiki we all love or at least like. I will try my best to be fair to every user no matter if I am elected or not and no matter what my personal relationship with him or her might be, because I believe that every user deserves a fair chance and maybe a second and maybe a third. I will do this because I want RationalWiki to be place with a clear bias, but still welcoming to people with different opinions no matter how irrational they seem to us. As long as people are calm and polite there is no need to worry, only when people are calling each other names or break other common courtesies I will intervene.

I will try to find a middle way between hands-on and hands-off approaches, putting my hands on those things I believe need moderating and keeping my hands (as a mod) away from things where I think the community is just fine without interference.

During the last election, I sort of viewed myself as the candidate who would be few people's first pick, but an acceptable choice for a large number of users here. From what I saw of the results, I think that was pretty accurate, but unfortunately that doesn't get you elected in a single transferable vote system. Anyway, if I'm made a moderator, I intend to actively work with the other mods and the community to get those policies in place that we need to keep HCM at bay, including a process for removing mods, should that ever prove necessarily (and I hope it won't). For those smaller issues that aren't worth the hassle of a sitewide vote, I will work to try to get a consensus among the moderators for a solution, keeping unilateral actions by any moderator to an absolute minimum. I'd also like to get a forum going for feedback on the mods, both individuals and the position as a whole; I've heard various grumblings about the mods being both ineffectual and tyrannical, and would like to know what specifics the community wants and does not want to see from the moderators. When it comes to disputes I'll try to settle them in an even-handed manner, based on the facts and merits, not on personalities. If you feel like reading more, my previous stump speech, on this page is still pretty relevant. Thank you. DickTurpis (talk) 19:32, 6 September 2011 (UTC)

Although I have Created my Own Religion, have different Beliefs about the Age of the Earth and doubt the Scientific Method I do have One Big Thing going for me: I am always Polite.

I Feel this is More Important than the Scientific Stuff and therefore you should vote for me as I will make the Wiki a Politer Place.

How this would Work in Practice. : My Politeness would give other users an Example to follow and through the Respect I thus gain (and which I feel I have Earned) Augmented by the position of Moderator/Supervisor, Politeness would begin to Ooze through the wiki. Furthermore I would Pray to my Deity for this to happen. Once Sufficient people Believe that RW is a polite and Tolerant Place this will collapse the Quantum Wave function and move us into a New Universe where this is the Literal Truth.

Level of activity and involvement : I pledge to be as least as Active - not to say proactive - as the majority of the currently Elected mods.

"Would you believe me if i told you i were being followed by a yellow submarine?" "No, no I would not." "didn't think so."

Seriously, I think there is tons of drama here at RW, created by, then fed by the drama itself - in a crazy cycle. Making more rules, having more levels of hierarchy, and pointing fingers at everyone over what they did or did not do, is not what I think this place needs, nor what I think will help it. I don't think we need more rules, nor do I think we need people reminding us what we are here to do.

I will put the public wiki first, cause that's what matters to me. As a mod, I will help when edit wars happen, as a mod I will help when conflicts arise on what is or is not a good article. But I won't get involved in wars of who posted on who's talk page, and who said bad things about whom. We are grownups, and I don't mind acting like it. If you want rules, I'm not your gal. Otherwise, I wait. I'm good at it.

I represent the true spirit of what this site has become. Elect me and I will do the job as well as I can, and my works will be ignored by those who wish mods had more powers. Also, free jelly babies! Cretinous incompetent (talk) 03:34, 8 September 2011 (UTC)

If elected I will not hesitate for a second to use the tools provided to stop disruption. If that means blocking a respected, established user who wrote a hundred articles, so be it. Although I do believe we should cut people a lot of slack, at some point "please don't do it again, mkay?" stops being effective, and action needs to be taken. I will also not hesitate to take unilateral action (although I will strive to keep it as light as possible) if I feel it is necessary and in the interest of the wiki (i.e. I will not wait for an edit war to get out of hand just because we didn't have a vote on the chicken coop yet); but any action I do take will be subject to review by the community. This is, I believe, in accordance with what Trent laid out in Forum:Moderators. I don't want to kill all the fun of this place, or turn it into WP, but bullying and abuse is only fun for the bully. If you want that kind of stuff, there's a wiki for that. I also don't want to force politeness and prohibit swearing because that's just fucking stupid.

If elected, I will not hesitate to ignore the aspies and other bitches who effectively quash rational discourse. The power to ignore shall be in full effect. No more censorship. Abuses will be dealt with appropriately, even if Nx does them. Occasionaluse (talk) 16:32, 8 September 2011 (UTC)

My platform is treated pine and very low to the ground. If elected I pronise to get Terror Trinka to sing show tunes weekly. Hamster (talk) 05:28, 17 September 2011 (UTC) 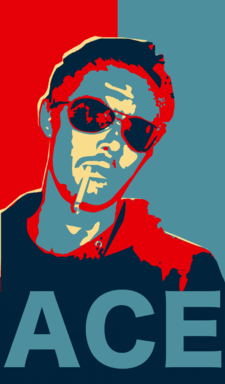 VOTE FOR
Ace
McWicked
putting the AtioNAL into RationalWiki since 2008

is voting for ListenerX. Hop on the bandwagon!

DICK
(I don't do graphics and shit)

For a better RationalWiki, where politeness and courtesy prevail
vote Maratrean

VOTE FOR
Crenulous incompepunt
.
Dying to live the vida loca on your behalf!