From RationalWiki
(Redirected from Reptiles)
Jump to: navigation, search

Reptiles (class Reptilia) are a group of amniote vertebrate animals. According to the phylogenetic definition, Reptilia is classified as "the most inclusive clade containing Lacerta agilis and Crocodylus niloticus, but not Homo sapiens".[1]

Reptiles evolved from amphibians during the Carboniferous period, and were the dominant life form for millions of years, until a major extinction event at the end of the Cretaceous period. The ability to lay their eggs on land, as well as stay out of water without desiccating, led to their success. Today, however, almost a fifth of all reptiles are in danger of going extinct.[2]

Reptiles play important roles in mythologies and religions around the world: particularly snakes, and dragons (which, despite the claims of cryptozoologists and creationists, are fictional reptiles.)

Some cranks, such as David Icke, believe in the existence of a race of reptilian humanoids, which have infiltrated human society for some arbitrary and nefarious purpose, such as taking over the planet (why remains unknown).

Many reptiles, such as green anoles, are kept by people as pets: Ken Livingstone is a notable example.

Most are good eating.

All modern reptiles fall within a monophyletic grouping known as Diapsida. They can be distinguished by their skulls, which have temporal openings on top of the head, although some diapsid reptiles have lost these skull openings secondarily (see below.) While they were much more diverse in prehistoric times, only two diapsid lineages remain today: Lepidosauria (reptiles with overlapping scales) and Archelosauria (chelonians and archosaurs, AKA: "ruling reptiles.")

Under obsolete Linnaean taxonomy, non-mammalian synapsids (amniotes with temporal openings on the sides of the head) were known as "mammal-like reptiles." Examples include Dimetrodon, Gorgonops and Lystrosaurus. While they have some superficially reptilian characteristics, these animals share a closer common ancestor with us than to anything around today that we'd classify as a reptile, so paleontologists these days prefer to call them "protomammals" or "stem mammals." 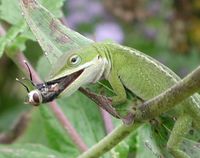 Lizards are the most numerous of the non-avian reptiles, with over 6000 extant species. They are extremely diverse in form and function, and range in size from the Dwarf Gecko, which can fit on top of a quarter, to the extinct Mosasaurs, which surpassed T. rex and other carnivorous dinosaurs. The Komodo Dragon is the largest living lizard, and is the apex predator of its habitat. Some lizards can change colour. Others can climb on glass. Some are even capable of asexual reproduction. Some lizards, such as tegus and monitors, are among the most intelligent of reptiles, with learning and problem solving abilities which rival mammals. Lizards are an example of a paraphyletic clade: some lizards are more closely related to snakes than they are to other lizards.

Snakes have no legs (oddly enough, there doesn't appear to be a sciencey word for that). However, to confuse the issue, there are also some species of lizards that don't have legs. Snakes are believed to represent a large group of lizards that evolved leglessness in the late Jurassic or early Cretaceous, while most other legless lizards lost their legs more recently. Something in lizard genes must really, really hate legs. Snakes can be distinguished from other legless lizards by their lidless eyes, forked tongue, kinetic skull and lack of ear openings. Many snakes, such as pythons and pit vipers, are also able to sense heat.

Tuataras live in New Zealand. They are the only surviving members of the reptilian order Rhynchocephalia, which were much more diverse in prehistoric times. Tuataras superficially resemble lizards but lack external ear openings and differ in certain key details of their skeletal anatomy.[3] They have a very low metabolism, a slow reproductive rate, and are known to live for 100 years. The Tuatara is a living fossil, as it has changed very little over time because it is a hardy creature, though only 2 species remain. 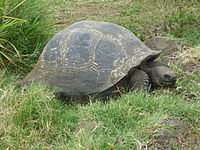 Also quadrapedal. These include turtles, tortoises, and terrapins, and let's not get into what each of those words mean. They are distinguished from other reptiles by having a great big bony shell. Some of them swim while some of them walk on land. They are particularly delicious, although many of them are endangered so you probably shouldn't eat any.

Turtles have long been the subject of controversy within the scientific community. Originally, turtles were classified as anapsids (basal amniotes lacking skull openings near the temples.) Genetic studies subsequently showed that turtles are a sister clade to crocodiles and birds, which presumably lost their temporal skull openings.[4] This prediction from genetics was later affirmed by fossil evidence in the form of Pappochelys, a transitional form between turtles and basal diapsids.[5] 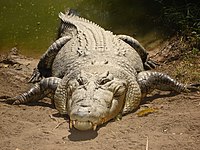 The largest extant reptiles, all of which are heavily armoured, semi-aquatic ambush predators. Several species are known man eaters. Crocodiles and alligators can be easily distinguished by the shape of the skull: croc heads are triangle shaped, gator heads are rectangular. With some exceptions, crocodiles are more common in Africa, Asia and Australia, while alligators are more common in the Americas. Crocodilians form a sister clade with birds, and they are collectively known as Archosaurs. Their kinship with birds can be affirmed by shared details of the skull, a four-chambered heart and a unidirectional respiratory system.[6][7]

Gator meat is a delicacy in certain regions in the Southern United States.

Though originally placed in their own taxonomic class by Carl Linnaeus, all fossil and genetic evidence points to birds being the descendants of dinosaurs. Since clades must be monophyletic to be considered valid, and dinosaurs are archosaurs, birds are objectively feathered reptiles.[8]