Thiomersal (US trademark name thimerosal, originally trademarked merthiolate)[1] is a mercury-containing compound formerly used as a preservative in many vaccines. The fact that some mercury compounds are toxic has led many in the anti-vaccination movement to conclude that vaccines containing this compound are dangerous. However, there is little evidence to support this.

Some people are afraid of thiomersal not least because it sounds chemical-y and unnatural.

In the Autism omnibus trial, it was decided that thiomersal in vaccines was not the cause of illness.

In January 1928, 42 children received injections of a diphtheria vaccine in Bundeberg, Austria. The first 21 were vaccinated from a fresh container of the TAM vaccine. Several days later, the same batch was used to inoculate a further 21 children; two days later, 12 children from this second group had died. This wasn't due to the dangers of the vaccine, but because their vaccine did not contain preservatives of any kind. The lack of an antibacterial agent in the sample of vaccine caused the second group of children to be injected with live staphylococcus bacteria, which had grown inside the batch between injecting the first group and the second. From this point on, preservatives and antibacterial agents became essential ingredients in vaccines, and thiomersal is one of several effective preservatives.[2]

It seems ironic, then, for anti-vaccination groups who want "vaccine safety" to attack one of the compounds responsible for making vaccines extremely safe.

In 1999 the CDC and the American Academy of Pediatrics requested a voluntary removal of thiomersal from vaccines, and today the preservative is mainly used only in seasonal flu vaccines. This may have actually encouraged anti-vaccine groups instead of shutting them up (as intended), by showing them that the FDA would bend to demands and that the FDA had doubts about vaccine safety (which they didn't). This of course has also done nothing to discourage the supposed link between vaccines and autism - even though the alleged cause hasn't been used as an ingredient in childhood vaccines for 15 years. Notably, neither the MMR vaccine nor the COVID-19 vaccine has ever contained thiomersal,[3] despite many antivaxxers' claims otherwise.

The only routine vaccines that still contain thiomersal are the influenza vaccine and one brand (Tripedia) of DPT vaccine.[4] Almost all other vaccines have trace or no thiomersal, usually using non-mercury-compound-containing alternative preservatives.[2] Arguments against other routine vaccinations should not invoke thiomersal. 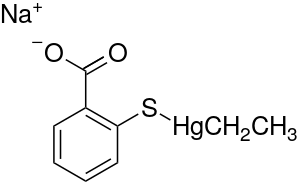 Molecular structure of thiomersal. Note the dreaded "Hg" for mercury.

Thiomersal does contain the element mercury. However, this mercury is in an ethylmercury bond (Ethyl(2-mercaptobenzoato-(2-)-O,S) mercurate(1-) sodium). Any argument involving the ingestion of 'toxic mercury' as an element may be compared an average person's daily ingestion of chlorine (a poisonous gas) through ordinary table salt (NaCl).

Consider that ethanol and methanol are extremely similar molecules but have quite different effects on the body.[note 1]

While in large doses thiomersal can be toxic, a 2002 study indicated that the mercury levels in infants receiving a vaccine preserved by an appropriate amount of thiomersal were low, some so trace that they could not be measured within significance. For comparison, the toxicity of mercury compounds found in fish oil pills is likely to exceed that of thiomersal. The study showed that the blood concentrations of mercury were below EPA guidelines and that the amount of mercury in stool samples was higher than normal. This indicated both that additional mercury was present (bad) and that the body was able to easily eliminate the mercury, rather than accumulate it (good).[7][8]

The amount of thimerosal actually present in vaccines is quite low and, most importantly, there are large studies available that have shown no evidence of harm.[9] In fact, you are exposed to more mercury by eating seafood than you are by taking any vaccines with thiomersal, and with most of the mercury in fish being toxic methylmercury to boot.[10]

It's also interesting to note that mercury toxicity has many significant differences to the symptoms of autism. Some of the more common signs of mercury poisoning are skin discoloration/shedding, itching/burning pain in the extremities, and loss of hair/nails/teeth (pronounced in children).[11] None of these has ever been noted as an adverse effect of vaccinations stabilized by thiomersal.