From RationalWiki
Jump to navigation Jump to search
Were you looking for Fidel Castro?

Coelacanths have changed quite a bit since Styloichthys

. The claim that they have remained completely unchanged is simply untrue. 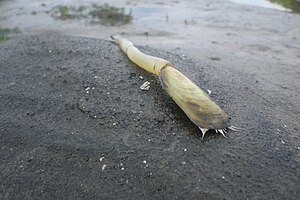 A living Lingula that's actually similar to its ancestors 450 million years ago.

A living fossil is a species (or sometimes a higher group) that has an extensive fossil record but also retains known living specimens. Creationists love them as they believe that such things appear to deny evolution, not realising that morphological adaptations are not selected in a stable environment. Living fossils are sometimes Lazarus taxa

, i.e. they disappear from the fossil record and are presumed extinct but are later found alive.

Charles Darwin coined the term "living fossil" in The Origin of Species. In reference to several genera of fresh water fish, he noted:

These anomalous forms may almost be called living fossils; they have endured to the present day, from having inhabited a confined area, and from having thus been exposed to less severe competition. [3]

Note that Darwin also provides an explanation as to why living fossils do not contradict the tenets of evolution.

Since then, creationists have latched onto living fossils, believing they provide evidence against evolution. Harun Yahya explains it:

Countless living things have remained unchanged for millions of years, and their current anatomical structures are exactly the same as they were millions of years ago. The fossil record is almost complete with both animal and plant specimens demonstrating this. It definitively and scientifically refutes evolution. [4]

This claim fails to recognise that, although evolution predicts that species can change, it does not require that species must change. [5] This is due in part to a misunderstanding of how evolution resulted in the development of new species. Yahya further explains:

According to the theory, all living things have descended from various "ancestral" forms. A living species that existed before gradually turned into another species, and every present species emerged in this way. According to the theory, this transition took place slowly over hundreds of millions of years and progressed in stages. That being the case, countless numbers of "intermediate forms" must have emerged and lived over the long process of transition in question. [6]

This interpretation assumes that the tempo of evolution is gradual and steady. Contrary to this assumption, the mode of evolution proposed by Darwin, while incremental, is not equivalent to phyletic gradualism. [7] Thus it is unlikely that diversification took place because one species "gradually turned into another species." As indicated by the fossil evidence, most new species probably developed by rapidly branching from ancestral species followed by long periods of evolutionary stasis.

Today, the mechanism is known: when selection pressure is lessened, or favors traits the organism already possesses to be successful in the current niche, stabilizing selection

occurs, which favors the existing, successful body plan; stabilizing selection is the opposite of disruptive selection

Some living fossils like lungfish can be problematic for creationists.

An Elvis taxon is a species or higher group that has been misidentified as reappearing after presumed extinction. These examples may appear to have some similarities with older and/or extinct species—but unlike other living fossils are not actual descendants of them. The similarities are just coincidental, most likely due to convergent evolution, making the Elvis taxon polyphyletic with its extinct "ancestor".

The term comes from Elvis Presley, and references the countless Elvis impersonators that have cropped up since his death. They may look like Elvis, but they're not actually related to him.