Rock: It's Your Decision 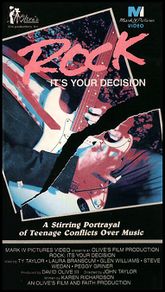 Rock: It's Your Decision is a 1982 American Christian fundamentalist propaganda film directed by John Taylor and written by Karen Richardson. The movie deals with the "evils" of rock music.[1]

Jeff Sims is a teenage Christian in conflict with his parents over his love for rock music. His mother has him see his local youth pastor and has him placed under contract to give up rock music for two weeks, and research whether or not it's good for him as a Christian. Jeff takes him up on his deal, and within a week he becomes increasingly fanatical and ends up alienating everyone in sight. The film ends with him giving a sermon about what he has "researched" about rock music, giving a list of several songs and bands and why they are "satanic" and "occultic", and that they are promoting sinful vices such as premarital sex, drug abuse, and even goes as far as to spring forth his homophobic views in connection with the music by saying that "some of them are admitted homosexuals". He then shatters a record against the podium and declares, "I've made my decision, what's yours?"

Everything that is wrong with the film[edit]

For starters, it's just a bad film. The acting, the cinematography, and the writing all make this an incompetent movie. If that were all, it would just be some inoffensive MST3K bait. But the main problems with this film lie not in its production, but in its intentions and messages.

Due to the nature of Rock: It's Your Decision, an alternate Aesop interpretation of it (especially by today's standards) would be a cautionary tale about the social repercussions of fundamentalist Christianity. While there are still Christians out there today who believe all forms of popular music are evil, they represent a very small minority, especially back in 1982. If this movie was made in the 1950s, it would've made sense considering the early hostility to rock & roll music acts like Elvis Presley and Little Richard, but by 1982 most people who grew up listening to these artists (including those from the 60s and 70s) were the children of the parents who were likely opposed to those acts in the first place—so the moral of the movie is tantamount to "Your granparents' teen rebellion music is eeevil!" The target audience for such a film would've been extremely low in that era, and more so by the 2010s. This makes the film's intention questionable about how the filmmakers were supposed to warn people about a genre of music if it would only appeal to a very small demographic of Christians about an issue that at the time was considered pointless by most mainline Protestant denominations. 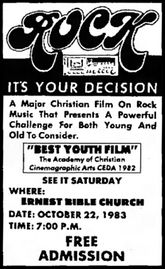 Jeff Sims is the protagonist of this piece of shit propaganda, and as with most fundamentalist heroes, his actions make him a misguided anti-hero at best. When he does disown rock music from his life, he tries to force everyone around him to do the same and dumps his friends for listening to the genre. Even when he yells at his own mother for watching soap operas thinking they are evil, the movie still wants you to root for this guy. The audience is meant to see his close friends, Marty and Melissa, as antagonists trying to tempt Jeff back into his old ways, but they make some valid points about him becoming fanatical as he repeatedly tries to push his new lifestyle choices on them and others.

Ultimately, the best conclusion is that this is a case study of values dissonance between fundamentalist Christians and everyone else. Jeff's actions are supposed to make him heroic, because from the perspective of someone who legitimately believes you will go to hell for the mere act of listening to rock and roll, every bit of dickishness and a holier-than-thou attitude is justified as an attempt to save peoples' souls. 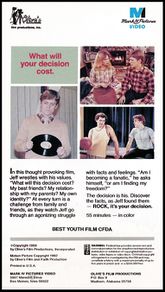 In the film, Jeff claims that rock music is a tool of the Devil because of specific mentions of the occult and Satanism found in the lyrics of many popular songs that are used to control people. He cites the titles and/or lyrics of several songs in an attempt to prove his claim; however, he ends up misinterpreting the songs' meanings, thus making his claims useless. Here are a few examples:

Jeff (and by extension the film itself) engage heavily in confirmation bias to come to the predetermined conclusion that the eeeeeeviiiiill rock and roll is trying to control the minds of children (maybe even your kids! Stop the madness before it's too late!).

Jeff also claims that the rock music was trying to "control" him, and makes the point in his end of the film speech that in fact when people are at a rock concert and are swaying along, snapping their fingers, humming it, etc., this is an example of the music "controlling" them. It is never asked if the same is true of people who are moved to tears by classical music, or raise their hands and sing along when hearing church music.[notes 1]