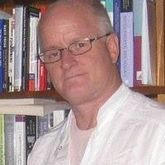 Image used by Rune Fardal on his website and Facebook profile where he poses in a white coat, trying to give the impression that he is a "doctor;" he even named the image file "DrFardal." In real life Fardal made floating docks and has no academic qualifications

Rune Fardal (1959–) is a Norwegian conspiracy theorist, crackpot anti-feminist men's rights activist and "anti-globalist" who has lately turned to the Christian right,[1] despite not showing any previous interest in religion. He is described as one of the most prominent notorious/ruthless activists against child welfare services in Norway.[2] He also falsely claims to be a "doctor" and "psychologist"[3][4][5] despite having no relevant qualifications,[2] has served time in prison for harassment and fraud, and likes to diagnose his opponents with personality disorders.[1] The latter habit is the result of his own traumatic experience of being diagnosed as such by real doctors and psychologists. Didrik Søderlind, an adviser with the Norwegian Humanist Association, has described Fardal as a "celebrity" among extremists in Norway.[6]

From anti-feminist to full-blown conspiracy nut[edit] 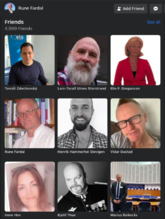 Fardal initially became known for his anti-feminist activism on the Internet from around 2000. His crusade against women was triggered by his divorce which he has documented extensively on the Internet and given the name "the Kvam Affair" (Kvam-saken). Over time he evolved into a full-blown conspiracy nut involved with all the main anti-government conspiracy theory movements in Norway. He has been convicted of harassment, fraud and forgery on at least three occasions (2004, 2016 and 2019), and has served time in prison.[1] He made a name for himself by harassing random child welfare services employees on the Internet, which earned him national media attention for the first time in the early 2000s.[7]

Fardal was part of the ensemble cast of conspiracy nuts that formed the short-lived, so-called "Norwegian Parliament's rule of law group" unilaterally appointed by far-right MP Ulf Leirstein, who was later booted from Fremskrittspartiet; the group was widely described as a conspiracy theory group and was dissolved days after its creation after Leirstein had faced massive criticism for associating with conspiracy nuts and abusing the parliament's name.[8][9][10]

He also claims to be both a "doctor" and a "psychologist" and presents himself as an expert on narcissism and psychopathy, despite having no qualifications in psychology or any other field; he is known for always diagnosing his opponents in Internet debates with personality disorders. In his actual professional life he ran a one-man business that built floating docks until he was convicted of fraud and barred from running an independent business.[1]

Following his most recent legal troubles he has aligned himself with the Christian right, despite not showing any previous interest in religion and even ridiculing Christians on occasion. He has started his own Facebook-based "TV channel" called Familiekanalen (The Family Channel) where he interviews (at length) conspiracy nuts and activists against child welfare services, and solicits financial help from fellow conspiracy nuts. He has also voiced his support for the right-wing governments of Poland and Hungary. He was also a local candidate for the fringe, Christian fundamentalist party "The Christians".[1] Fardal is active in the alt-right men's rights group MannsForum, whose leader has praised him in glowing terms.[11]

Fardal is a self-proclaimed "anti-globalist;" he compares the Norwegian police to the Nazis and describes the judicial system of Norway as "lackeys" for the "elite".[12]

Rune Fardal once had a website where he introduced himself in this way:

Fardal since deleted the above presentation. By all accounts, his experience of being diagnosed as a psychopath by real doctors and psychologists triggered his later habit of always diagnosing his opponents as psychopaths, and falsely presenting himself as a doctor and psychologist.