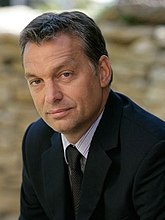 Viktor Orbán (1963–) is the current prime minister of Hungary, taking office in 2010 (though he served a non-consecutive term from 1998-2002) and maintaining a death-grip on it ever since. He has also been the head of Fidesz for most of its existence, and has taken the formerly (classical) liberal party to the right wing of conservatism. Conveniently, he was virulently anti-Russian until he started winning elections.[1]

He and his party were originally liberal, but this changed after 1993, when they became infamous for the "székház ügy" or "hall controversy", in which they sold their own party building to a bank at a ludicrous price.[2] However, this meant that they could now buy or build a media empire and make people forget about these events.

While he already had a largely forgettable term from 1998 to 2002, when Hungary was not yet in the EU and hence nobody cared, his current term has been characterized by right-wing populism, anti-liberal and anti-democratic rhetoric, and attempts to shut down the free press, tax the internet, and blame the EU for all ills that have befallen his country.

His (second) ascendancy to the post of prime minister was a result of the complete disintegration of the Hungarian democratic left. One of the biggest parties in Hungary besides his own Fidesz is Jobbik, which before 2015 was a bunch of right-wing lunatics even further to the right than Orbán. Hence, many Hungarians voted him into office because the democratic left had disappointed them, and they kept voting for him because, well, at least he's not Jobbik. Orbán managed to twist the electoral law and constitution in his favor so much that even the roughly 45% of the vote his party got in the 2014 election

was enough to gain the number of seats necessary to change the constitution. Even an alliance of all relevant opposition parties failed to unseat him in 2022.

As of 2020, Icky Vicky has achieved his dream of turning Hungary into a Dictatorship. The Hungarian parliament passed an act allowing him to rule by decree without any term limits, under the pretext of fighting Coronavirus.[3]

At least he's not Jobbik (pre-2015). He has been accused of using Jobbik (when they were still far-right) as a barometer for how far-right he can be without being insane.[4] In the 2019 local elections, however, Jobbik, having shifted from the far-right to the center-right, joined a coalition of liberal and leftist parties against Fidesz and Viktor Orbán. This led the more radical portion of Jobbik to leave and form other political parties (Magyar Hajnal - Hungarian Dawn, Mi Hazánk Mozgalom - Our Homeland Movement), although a few quite icky people still remain in Jobbik in the name of "appealing to right-wing voters".

Arguably, he could have had some role in boosting the automotive industry in Hungary.[5] However, Hungary's GDP is still lagging compared to its neighbors, and it was by effectively turning the country into a tax haven with a cheap and exploitable labor force.

Even he finds Richard Spencer extreme, and used his power to shut down a 2014 rally by the National Policy Institute in Budapest.[6]

He abolished hospital and educational fees and reverted privatization of social insurance, previously started by Hungarian socialists. He also expanded the welfare state-but only for the rich, while the rest have to make do with its communal work program.

He took over the media. The public channels are almost all drinking the Kool-Aid already, now he's going after the private channels. He tried to introduce an Internet tax and only (temporarily) backed down after massive protest and even a piece[8] on Last Week Tonight forced him to. He is trying to stir up conflict between the Hungarian minority in Slovakia and Romania and other ethnic groups living in said country. On a visit to Slovakia, he ignored the major Hungarian party (then in coalition with another party to form a government) and instead talked to representatives of a smaller Hungarian party more in line with his wingnut beliefs. He also claims the refugee crisis of Summer 2015 is "a German problem" and says "nobody would like to stay in Hungary."[9] Indeed. Orbán and his ilk have written a new constitution

that basically enshrines the fiscally and socially conservative views of Orbán and his party into the highest law of the land for the foreseeable future. This is part of his ongoing campaign to remake Hungary as an "illiberal state", which has become Orban's dream. He has repeatedly referenced Russia and China as models he wishes to follow.[10] The man is turning turned his country into a dictatorship under the justification that dictatorships make lots of money, apparently ignoring the small matter that the US and Germany, along with most of the world's most competitive economies, are democracies[11] and that Russia, like many other autocratic regimes, is a kleptocracy.

He also had a massive role in making the EU's refugee crisis far worse than it needed to be. His xenophobia (or cruel political calculation in a country whose second largest party is openly fascist) has driven him to order a razor-wire fence to be built along Hungary's borders, and his current policy involves stopping refugees and hauling them off of trains which weren't intended to stop in Hungary[12] which means Orbán is being needlessly cruel just for the evulz.[13] Much of his justification for this is a desire to "defend European Christianity" from the "Muslim influx."[14] This has some unfortunate connotations for those versed in history.

Orbán, a former benefactor of George Soros, has waged a demonization campaign against Soros, a Jewish Holocaust survivor from Hungary, during his 2018 election campaign despite not having much real opposition.[15]

Thanks to rampant racism in Hungary against the Roma (and stereotypes of them being thieves) and some old and flattening photo of him in his youth[16], many believe that he's secretly Roma, with most going as far as his original name was Viktor Orsós, but somehow not only changed his, but some of his long dead relative's names to hide this fact. The actual truth is that long before the refugee crisis in 2010, his party rallied on a platform that targeted Roma minorities, which later got implemented in some form of other, such as gutting social benefits for the unemployed, and lowering the school age from 18 to 15. Later Fidesz also gifted the very well funded religious schools the power of redlining, forcing Roma kids into the underfunded and catastrophic secular state schools.