Sauna is a room that is hot and humid enough to rapidly induce sweating, usually at 60-100° C, where sauna-goers bathe, often naked or covered with a towel. In many types of sauna, steam (Finnish: löyly) is used to enhance and moderate the heat. Spas, swimming halls and gyms often feature a sauna. Sauna traditions are found around the world, but its status is most entrenched in Finland. In Finland, sauna sessions are done for pure enjoyment and as a social event, where the bathers take relatively short sessions in a hot sauna mixed with bathing, preferably in a lake.[1]

However, the farther you go from Finland, the more woo is associated with the sauna, usually with claims of various unproven health benefits. These "saunas" are increasingly divorced from the original context of relaxing and enjoying oneself, taking hilarious forms such as the "sauna belt". Cultural relativists would of course argue that these are not anymore right or wrong than the Finnish sauna. Besides this, in many countries, "sauna" is an euphemism for prostitution and related services.

In the Finnish context, sauna sessions are understood as social events where the family or other reference group (such as coworkers) bathe together. Except for immediate family, sessions are usually segregated between men and women. The usual practice is to have a shower, then sauna for ca. 5-15 min, a bath, preferably in a lake, or even by rolling in the snow, then another sauna to warm back up. Alcohol may be involved, although it's safer to drink after, not before. Nudity is the rule, although not absolutely required, while mixing sexual behavior with sauna is a faux pas. Sauna is reserved for relaxation, so hurrying, talking politics, loud speaking, arguing or fighting are unacceptable in a sauna.

Saunas are usually always available in swimming halls, spas, gyms, hotels and summer cottages, and are common in workplaces, military installations and various other public buildings. In modern practice, saunas are built into the same moisture-sealed part of the house as the showers. Heat comes from a sauna stove, where stones are heated to high temperature. In the traditional smoke sauna, the stove is nothing but a big pile of rocks, pre-heated by a fire underneath which is put out before bathing. Smoke from the fire coats the insides of the room with soot. Then, water is thrown on the rocks to release steam (Finnish: löyly). In a modern implementation, the pile of rocks is much smaller and is heated by a firebox with a chimney or with electric resistors. Despite sauna being an old tradition, the sauna stove is a modern technology, which allows a higher temperature, fast heat-up and a clean sauna room.[1] Temperatures are typically 60-100° C, which is above the dew point, so that there is no visible mist. In a "Turkish sauna", the temperature is lower but humidity is higher, so that the room is filled with mist.

In modern Finland, sauna is considered enjoyable in itself, and is not very strongly associated with claims of health benefits. It is an odd experience for a Finn to experience the German sauna with its strict rules and schedule "to maximize health benefits". Finns reject rules on how long to stay in a sauna, or how often or how much to throw water on the rocks for steam.[2] They emphasize relaxation and enjoyment, staying in the sauna only as long as it doesn't feel too hot,[3] and rarely punish themselves by staying long periods of time in a sauna, except maybe as an impromptu competition for who's the toughest.

Another tradition associated with the Finnish sauna is the vasta or vihta, a bunch of birch twigs that sauna-goers beat their backs with. This is enjoyable much like backscratching. A little more involved version is the vasta made of juniper branches (katajavasta/katajavihta).[4][5]

In premodern Finland, the sauna had strong spiritual associations and was believed to have beneficial powers. These traditions haven't entirely disappeared, although they aren't taken very seriously anymore. One example is connected to the tonttu tradition: the sauna had a tutelary spirit, the saunatonttu, who would punish anyone behaving improperly in the sauna. Today they are relegated to a decorative role: a small garden gnome-like clay statue that can be placed on the stones and used for vaporizing scents.[6][7]

Sauna is associated with claims about weight loss woo. Thermogenesis is reduced in a hot environment, so it would reduce weight loss if anything. The weight lost in a sauna is all water weight, lost in sweating, and the loss is reversed quickly.[8] If burning of fat would explain the weight lost in a sauna, at 7700 kcal/kg released, the body temperature would rise approximately by 100 K/kg lost for a typical 77 kg person, enough to fry them. As usual, the laws of thermodynamics are incorruptible.

Claims that sauna somehow constitutes exercise, or helps with exercise, are also common. Sauna does cause temporary heart rate increase, but not because of muscles being stressed: on the contrary, blood is diverted away from the muscles to the skin.

Sauna is supposed to "cleanse" or "detox". No, it won't: sweating is an extremely ineffective route of elimination.

Sauna involves exposure to conditions liable to cause hyperthermia. Fortunately, nausea is a good warning symptom.

Use of alcohol or drugs together with sauna is unsafe, because the person may pass out and die from hyperthermia.

Persons with known heart disease, such as angina pectoris, recent heart attacks or aortic stenosis should avoid the sauna, as it can trigger new attacks.

Repeated exposure to low relatively levels of infrared, such as from saunas or other heating devices, can cause erythema ab igne

These "non-traditional" implementations can be odd or downright hilarious, and usually the weirder it is, the more woo there comes with it. 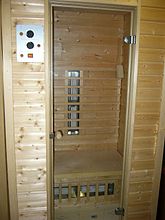 In an infrared sauna, the uniformly heated room is replaced by an infrared lamp. The experience is more like being inside a toaster rather than relaxation. Claims about health benefits are even more excited than for actual saunas. Claims about dermatological benefits are common (and unsupported). It's claimed that the "heat generated in a sauna penetrates deep into your body" and results in weight loss.[10] Admittedly, they're on the right track… but consider this: what if there was a weight loss method that generated heat directly inside the body? A method that could burn as much as 500 calories an hour, releasing immense amounts of mitochondrial energy? And naturally at that? Wouldn't that be the thing in weight loss? Which method is this is left as an exercise

A sauna box is a heated box enclosing the body of the sauna-goer, while the head sticks out, like if you were transformed into a washing machine-human cyborg. It looks very silly, with no other efficacy. It is constructed from various materials such as wood or aluminum-insulated quilt. This comes with the usual claims that it helps to lose weight, eliminate toxins, and to relax.[11] One out of three correct, can't be bad, right?

From the deep end of the pool, we can find the sauna belt. A sauna belt is a belt containing an resistor that makes you sweat around the midriff. Claims are that this causes targeted loss of midriff fat. These are, like with most weight loss gimmicks, false.[12] Sweating isn't a form of exercise and doesn't burn fat, and in any case it's not possible to burn fat from a specific part of a body with exercise alone. The Finnish Association for the Study of Obesity (FASO), a scientific association, awarded the "prize" of "Weight Loss Limbo of the Year" to the Sauna Belt. This anti-prize is "awarded" to products promoted with scientifically unconfirmed claims and for which a weight loss effect is impossible, as understood with current science.[13][14]

Sauna is a good way to vaporize the essential oils used in aromatherapy… but that doesn't "un-woo" the therapy itself. For example, according to one veeery reliable source, birch extract vapors are supposed to cure ringworm infections![15]

Sauna does have some actual effects. Almost all of them are short-term effects, reversed within hours. Self-reported effects by sauna-goers are that their muscles are more relaxed, stress levels are reduced and the quality of sleep is improved.[16][1]

Sauna sessions reduce arterial stiffness[17] and have a short-term beneficial effect on blood pressure.[18] Whether or not this is clinically significant requires further study.[19] Frequent sauna bathing (2-3 times a week or more) significantly reduces the risk of stroke.[20]