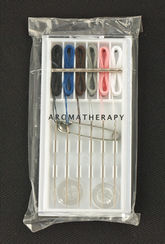 Aromatherapy is a range of practices that have in common the use of essential oils for therapeutic purposes. While using various scents for various practices, such as the use of candles, incense, perfume, is an old practice and a luxury that is seen across several civilizations (Chinese, Indians, Egyptians, Greeks, and Romans are among a few), the term first appeared in print in 1937 in Aromathérapie: Les Huiles Essentielles, Hormones Végétales, by René-Maurice Gattefossé. Gattefossé has burnt his hand badly from a laboratory accident, and noticed lavender oil apparently treated the injury almost immediately.

Like most woo, aromatherapy starts with observable, real effects of smells on humans, and extrapolates and exaggerates into a whole range of treatments from the effective,[1] to the banal, to the outright ridiculous.

Most traditional aromatherapies are based on the idea that different aromas are helpful for different moods and emotional or mental needs[2]. It is very common to see claims that aromatherapy is a form of pain relief.[3] Practitioners also state that everyone has a different body chemistry, so that means if it doesn't work, it's just not the correct oil. Oh, and they said it will take time to improve symptoms. Y'know, regression to the mean.

Aromatherapy has been claimed to cure mild depression[4] according to Kathi Keville, a person who has written for bastions of science like the New Age Journal magazine and the very section in the site that hosts this content states that "The publication of this information does not constitute the practice of medicine, and this information does not replace the advice of your physician or other health care provider," similar to a Quack Miranda Warning.

This stuff is also being used to cure insomnia, anxiety, respiratory problems[5] and even the victim of most of these alternative scams: cancer.[6] Which of course is claimed by Ty Bollinger.

In the first type, a therapist will suggest different oils or oil blends to balance the body's natural rhythms, perhaps humors?

According to this pretty useless site:[7]

There is probably much more, as alternative medicine is prone to offering treatment for a smattering number of reasons.

While it may be an effective healing move in Pokémon, aromatherapy is not an effective healing move in humans. The "evidence" most alternative medicine is based on is small scale and poor quality; this applies to aromatherapy.[8] Experiments related to aromatherapy stink are known for having bad controls including being poorly blinded (smell versus no smell groups for instance). For experiments that measure pain, this is also on top of the difficulty of reporting pain and the multitudes of confounding variables that can affect pain perception, such as mood, perception of novel treatment, patient interaction, and distractions. A Cochrane meta-study dealing with symptom relief in cancer, massage with and without aromatherapy, found little evidence of pain relief from aromatherapy, among studies that have usually a too low sample-size or are poorly designed.[8]

Exactly how aromatherapy works to cure people besides the interaction of smells in of themselves is never really explained, as most sites that have a section of how essential oils work just describe how they are made and what useless oil you can buy from other useless oils. How Stuff Works doesn't really do its job explaining how this stuff works.[9] There are a few in vitro studies on essential oils that show some effects, but their application is very limited (by nature of in vitro studies) and how they translate to how their scents affect human moods.

As well as the inherent problematic practice of wasting money on useless medicine and potentially substituting useless concoctions in place of conventional medicine, the essential oils in aromatherapy may be a skin irritant.[10][11] It is also poorly regulated, as the claims that scents having any beneficial effects are regulated as a cosmetic claim, and it thus does not require FDA approval.[12] In 2021, Wal-Mart recalled an aromatherapy room spray containing a dangerous bacteria that sickened several and killed at least two people.[13][14]

Combined with the lack of evidence it really is a waste, but for you, not for those that sell the products. According to Quackwatch, Health Foods Business estimated that the total of aromatherapy products sold through health-food stores was about $59 million in 1995 and $105 million in 1996.[12]

It sells well because people like things that smell nice, if the perfume industry is anything to go by. Since the only thing it really has going for it is that nice smell; you can easily replace it with something else that smells good. Examples include perfumes (obviously), candles (keep them out your ears though), tea, gum tree leaves (only counts if you live in Australia cause they are flying everywhere there- joke), car air fresheners and a bunch of stuff that is far cheaper and potentially more useful. Heck even a book smells nice and it's practical too due to entertainment and/or informational purposes except that book.